Intercontinental and submarine ballistic missiles, as well as other military hardware, were presented at a military parade in North Korea, dedicated to the 105th anniversary of the birth of Kim Il-Sung. 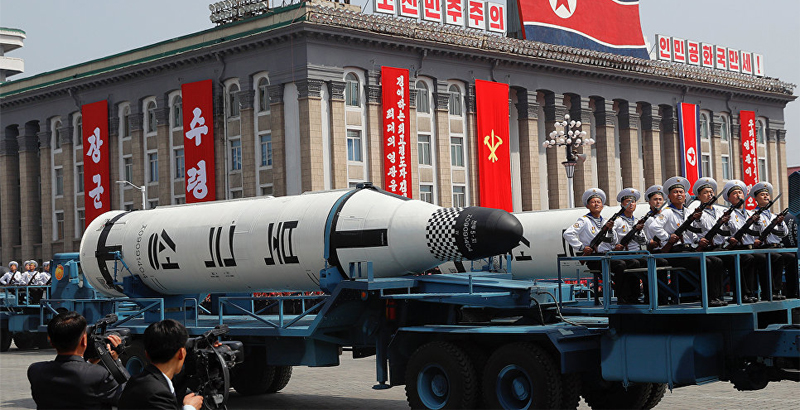 On Saturday, Pyongyang hosted a parade, dedicated to the 105th anniversary of the birth of Kim Il-Sung, the founder of the state and grandfather of the current leader of the country, Kim Jong-un. This day in North Korea is called the Day of the Sun and is considered the main public holiday. North Korea invited 200 foreign journalists to cover the event. Usually, the Democratic People’s Republic of Korea (DPRK) celebrates this day with a demonstration of the increased military power. As a reporter of the RIA Novosti news agency reported, several types of military hardware were demonstrated at the parade.

Kim Jong-un personally took part in the military parade, which was held on the central square of Pyongyang. Parade detachments of the ground forces, the special forces, the naval forces and the workers’ and peasants’ militia, including women’s battalions, marched in front of a tribune, where the state’s leader was sitting.

In addition, the DPRK presented missile launcher systems, small and medium-range missiles of the ‘ground-to-ground’ type, intercontinental ballistic missiles and submarine ballistic missiles at the parade. The military hardware passed in front of the tribune, where the country’s leadership and about 200 foreign journalists, nvited to cover the event, were sitting. However, as the news agency’s reporter noted, it was not possible to visually determine the type of the demonstrated missiles due to the specifics of North Korean equipment.

At the same time, some representatives of the DPRK Foreign Ministry, who accompanied foreign journalists in Pyongyang, assured that the DPRK Armed Forces did present intercontinental ballistic missiles and submarine ballistic missiles, but this can hardly be considered as official information.

The military part of the parade ended with a flight of aircraft over the square. They drew a figure in a shape of 105 in the sky in honor of the anniversary of the birth of Kim Il-Sung.

After the passage of military hardware and the army, several thousands of people, including Komsomol students, doctors, sportsmen and public employees, marched through the square, greeting Kim Jong-un. After the end of the solemn part, Kim Jong-un himself walked through the tribune, waving his hand in greeting to the crowd.

As it also was reported, speaking before participants of the parade, a Vice Marshal of the Korean People’s Army and a member of the National Security Council (NSC), Choe Ryong-hae, said that North Korea would respond with a nuclear strike to a nuclear war, provoked by the US. As the Kyodo news agency reported, according to the Vice Marshal, “the fair nuclear weapons will crush the American one.”

Meanwhile, official Beijing has once again urged Washington and Seoul to stop deploy the THAAD anti-missile system in South Korea and promised “to take necessary measures” if this does not happen.

As spokesman for the Chinese Foreign Ministry, Geng Shuang, said during a press conference on Friday, since the decision to deploy the THAAD anti-missile system in South Korea was taken, the situation on the Korean Peninsula had deteriorated.

Q: It is reported that all necessary materials for the deployment of THAAD have been delivered to the golf course in Seongju region in the southeast of the ROK [the Republic of Korea]. The ROK military suggested that THAAD would be deployed soon to counter the threat posed by DPRK’s nuclear and missile programs. What’s China’s comment on this?

A: China has been consistent and clear in opposing THAAD. The deployment of THAAD by the US and the ROK in the ROK is not conducive to denuclearization of the Korean Peninsula nor peace and stability on the Peninsula. It seriously undermines the strategic and security interests of China and other countries in the region and breaks the strategic balance of the region.

It is obvious to all that since the US and the ROK decided to deploy THAAD, the situation on the Peninsula, instead of cooling down, has become more intense; the ROK, instead of becoming more secure, has been faced with greater threat and challenge.

We strongly urge the US and the ROK to put an end to relevant process of deployment. And I want to reiterate that China is prepared to take necessary measures to preserve its national security interests and regional strategic balance.

The US started to deploy the THAAD missile defense system in South Korea in early March 2017, delivering the first batch of THAAD components by a military transport aircraft.

#THAAD deploys to the Korean Peninsula; this purely defensive system honors our alliance commitments to the #ROK. https://t.co/I4bPDh9wRt pic.twitter.com/apqqQkv6Ch

I noticed that some of the formations were mixed sex. Of course that’s nothing compared to the West where some units have at least five genders in their ranks.

The other irony is that without those missiles and nukes I still think nobody would give a single fuck about NK. They could still be annoying at times, but then they would only be annoying for SK. Too much hassle for anyone to target them with regime change. Who wants to be responsible for 50 years of massive economic investments and deprogramming an entire culture?

You serious? The US govt doesn’t need a WMD excuse (not a REAL one, anyway) to launch regime change operations. Just ask Iraq. Or Lybia. Or Syria. Or the Ukraine. Or Yugoslavia. Or Egypt. Or… well… you get the picture.

In fact, states with real WMDs, namely Russia and China, are the only ones that have been relatively safe from Uncle’s malfeasance.

Dude, read up on North Korea. That place is a giant mess. You topple that regime, you open the floodgates. Just look at the German unification. The GDR of all the former communist countries was the most efficient, the easiest to change, the least brainwashed. It nearly bankrupted Germany. They’re STILL paying and cleaning up that mess as Eastern Germany is still economically backwards compared to Western Germany.

Compared to the GDR North Korea is on another planet. If South Korea would have to absorb that country it would be plunged into economic chaos for at least half a century. It will take decades to undo the damage that 70 years of brainwashing and mismanagement have wrought. Millions will flee to China and South Korea, causing massive upheaval.

No, only on Planet Conspiracy Theory would overthrowing North Korea for shits and giggles of the US elite make any sense. In the real world, not so much.

Your reasoning is founded on the assumption that the War Party needs some rational justification for attacking. If that were the case, though, they wouldn’t have bothered to topple Milosevic, Saddam, Gadaffi, or Assad. They all headed pathetic states that weren’t worth the trouble of taking down and cleaning up; that didn’t save them. In Assad’s case, Russia did, so far.

The bottom line is: for the reality-detached tax gobblers in Washington (now including Trump), war is the objective, not the means. Call it conspiracy theory if you like. I think it’s less conspiracy and more of a combination of generals and politicians and pundits eager for attention and glory, military contractors eager for pork, lobbying from foreign “allies” who want someone else to fight their battles, and “patriotic” useful idiots beating the war drums. “Never assume a conspiracy when stupidity is an adequate explanation.”

Best Korea is truly nationalist! Worst Korea is occupied by Chinese and United Nations Marxist. Go best Korea go! Advance, take care of your people, and always be ready to defend yourselves. South Korea’s will be a minority within their own country within 20 years, Chinese invading them by the hundreds of thousands every decade. The Chinese will seek to racially replace best Koreans as well… This must never be allowed to happen. https://www.youtube.com/watch?v=SUfmp9fUMvI

The parade had a 8 axle ICBM that looked like TOPOL or DF 31. If each axle handles 12000 kilograms the missile size could meet or exceed Topol or DF 31. I still expect 200 KT Sixth nuclear test in days. Safest to do nuclear test when Pence is in South Korea. I doubt US will burn the US Vice President and his wife by starting war during their visit. On other hand the US sacrificed ships in Pearl Harbor so nothing is excluded. During parade it would not have been smart for DPRK initiate war with much of DPRK leadership and weapons vulnerable on parade grounds.