On December 7th, North Korean’s envoy to the UN Kim Song said that denuclearization was off the negotiating table with the US.

He furthermore said that lengthy talks with Washington weren’t needed. This is the first mention on the matter since talks between the US and North Korea fell through in October, when the two sides met in Stockholm, Sweden.

Kim Song said in a statement that the “sustained and substantial dialogue” sought by the US was a “time-saving trick” aimed at suiting the domestic political agenda of the upcoming 2020 Presidential elections.

“We do not need to have lengthy talks with the U.S. now and denuclearization is already gone out of the negotiating table,” he said in the statement.

Kim Song also criticized the EU members of the UNSC who criticized short-range missile launches by the North, calling it a “serious provocation” and saying they were playing the role of “pet dog” of the United States.

North Korea’s Foreign Ministry repeated a call for Washington to change its “hostile policies” and said it was up to Washington to decide what “Christmas gift” came at the end of 2019.

Earlier, North Korean leader Kim Jong-Un gave a deadline until the end of the year for the US to change its stance in negotiations.

North Korea offered to abolish its Yongbyon nuclear complex in return for the revocation of key five U.N. resolutions during a failed summit between Kim Jong Un and US President Donald Trump in February 2019 in Vietnam.

North Korea has stepped up calls for the United States to an end to joint military drills with South Korea, as well as retracting its “hostile policy.”

On December 3rd at the NATO Summit, Trump called Kim “Rocket Man” and said that the US reserved its right to use military force against Pyongyang. The North answered that one more such outburst would represent “the relapse of the dotage of a dotard.”

In evidence of its good will, North Korea had also said it dismantled its Sohae Sattelite Launching Ground as an initial step toward denuclearization.

“The Academy of the National Defence Science of the Democratic People’s Republic of Korea made a report on the results of the successful test of great significance to the Central Committee of the Workers’ Party of Korea.

The results of the recent important test will have an important effect on changing the strategic position of the DPRK once again in the near future,” the statement said, not revealing what the test involved.

Missile experts said it appeared likely the North Koreans had conducted a static test of a rocket engine, rather than a missile launch.

“If it is indeed a static engine test for a new solid or liquid fuel missile, it is yet another loud signal that the door for diplomacy is quickly slamming, if it isn’t already,” said Vipin Narang, a nuclear affairs expert at the Massachusetts Institute of Technology. “This could be a very credible signal of what might await the world after the New Year.”

On December 8th, just after the announcement of the test, Trump warned that Kim Jong-Un risked “losing everything” if he resumed hostility.

“Kim Jong Un is too smart and has far too much to lose, everything actually, if he acts in a hostile way. He signed a strong Denuclearization Agreement with me in Singapore,” Trump said on Twitter.

….with the U.S. Presidential Election in November. North Korea, under the leadership of Kim Jong Un, has tremendous economic potential, but it must denuclearize as promised. NATO, China, Russia, Japan, and the entire world is unified on this issue!

This was in answer of comments that Democrats alleged North Korea would interfere in the US 2020 Presidential Election.

Despite the threats by Trump, it appears that North Korea isn’t as backward, as MSM and the US would like it to be. The renovated city of Samzhiyeon. Click to see full-size image

North Korea appears to be working on a “utopic” city in the mountains. The city is called Samzhiyeon and it is the center of the district of the same name. It is located near the sacred Mount Pektusan.

The city was the first of several, a project by Kim Jong-Un. The construction was completed under his personal guidance. In the frames from the ceremony are smiling officials in three-piece caps, greeting the assembled Kim with perfect styling, without a headdress, in a black leather trench coat below the knee. People are rejoicing, waving banners, national flags and something like red and pink pompons.

“An unprecedented glorious change in the shrine of the revolution promises the advent of a bright future for our Motherland,” the Central Telegraph Agency of Korea (CTAC) reported. The country is striving forward along a “single path of enrichment and prosperity”. The government intends to “strongly stimulate the construction of a powerful socialist state.”

State media described the construction site as a patriotic impulse of North Korean youth. Young builders in harsh conditions ate frozen rice and ignored the foreman’s concern for their health in order to work harder.

Of particular note is the potato flour factory. In July 2018, North Korean potato farms made headlines in the global media after instead of meeting with U.S. Secretary of State Michael Pompeo, Kim Jong-un went to inspect the production of potato starch in Samzhiyeon.

As a rule, when talking about modernization in the DPRK, Pyongyang means, however, renovation is not only in the capital. And this is evidence of it: the authorities can afford the improvement of remote and backward areas. Samzhiyeon, according to the interlocutor of the agency, will serve as an example for the ennoblement of other remote regions.

“Over the past five years, the DPRK has actually improved the quality of life,” expert Konstantin Asmolov said. “Everyone has the image of devastation and famine in their heads, but North Korea’s growth rate is higher than South.”

What “great construction sites” will follow Samzhiyeon is not yet clear. But there are signals that this “utopic” city will not be the last.

However, one thing is becoming apparent, North Korea’s national pride and identity are difficult to fake, in the face of evidence such as Samzhiyeon.

The whole bizarre idea that DPRK will unilaterally disarm in the US and Zionist rule of the jungle was simply insane by itself. Kim has gone back to calling the fat orange old Trump dotard again, and rightly so.

I really admire Kim for his backbone and honest talk. The enormous responsibility Kim bear on his shoulders. Another of the few heroes we have in this world.
Here is another of Kim and North Koreas f…finger to the colonial usury hypocrites in West. 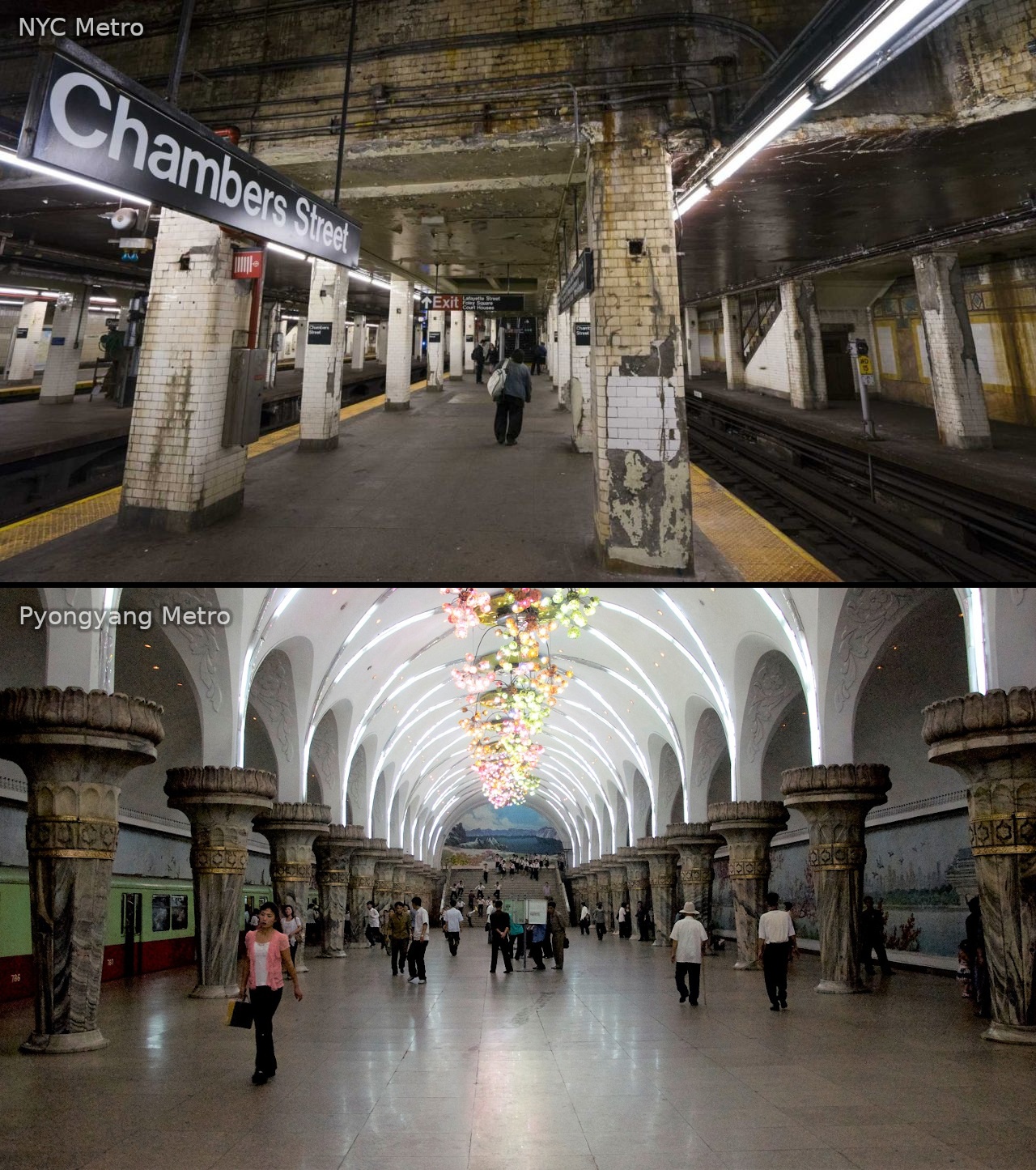 Contrary to US and Zionist propaganda, the DPRK economy is doing quite well as it is developing strong links with China and Russia in integrated trade and economic development. The high tech and R&D sectors are thriving and their nuclear tech and weapons industry is top notch. Kim has a large nuclear arsenal and ICBM’s now that can hit any target on earth.

Not to mention SLBMs already operational. NK likely conducted a test for a rocket engine for stationary satellites. Once put on the orbit, they can monitor US all the time.

what happened to you tommy? you’re supposed to pink paint the unhinged states of A’s efforts and intellectual and financial supremacy not showcase the dilapidated infrastructure of the lower 48.