According to the Japanese Prime Minister, North Korea may launch missiles with the sarin nerve agent. 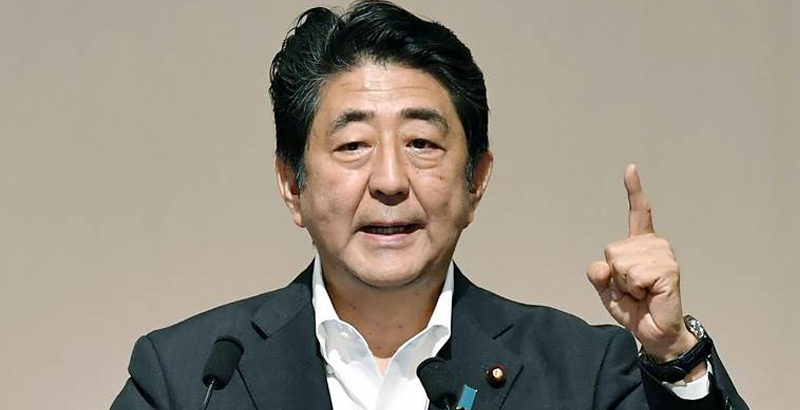 North Korea may have capabilities to carry out a missile strike, using warheads with the sarin nerve agent, Japanese Prime Minister Shinzo Abe said during his speech to the Committee on Foreign Affairs and Defense of the Japanese Parliament’s Upper House.

“There is a possibility that North Korea is capable to fill warheads with sarin and carry out a [missile] strike. Of course, the discussion of deterrence measures should depend on the real situation. I think that we should constantly consider different options regarding the steps our country should take,” the NHK broadcaster quoted his words.

However, the statements of the Japanese Prime Minister sound a bit strange, as it is a known fact that North Korea has nuclear capabilities, which the country has repeatedly confirmed. It is obviously that in case of transition to military actions the Democratic People’s Republic of Korea (DPRK) will use nuclear weapons, but not chemical. The Abe’s statements sound as an attempt to copy the rhetoric of his Western ally.

The Japanese Prime Minister emphasized that Beijing and Tokyo are looking for peaceful settlement of tensions on the Korean peninsula. He also noted that Japan will closely cooperate with China and Russia on issues of the nuclear and missile programs of North Korea.

“Continuing the close cooperation with the US and South Korea and also interacting with China and Russia and other interested countries, we urge the DPRK to refrain from further provocative actions, comply with resolutions of the UN Security Council and abandon the nuclear and missile programs,” Abe said.

Last week, after another DPRK missile test, the topic of a possible US attack on North Korea was the main issue of discussions in Japan. Remarks of US President Donald Trump that all options for influencing the DPRK were being considered, as well as the subsequent missile strikes on an airbase in Syria and dispatch of the Carl Vinson aircraft carrier and a US air strike group to the area of the Korean Peninsula caused concern in Japan. Being an ally of the US, Japan cannot but support any measures, taken by Washington towards North Korea. However, at the same time, Tokyo understands that its territory can inevitably become an object of any acts of retaliation by the DPRK side.

Earlier, it was reported that Japan demanded from the US mandatory preliminary consultations in case of discussions of a possibility of a preemptive strike on North Korea.

This proves my point that nuclear weapons have lost their aura of terror that they had during the Cold War. The fact that NK has nukes doesn’t really inspire the fear of God into people. So Abe has to scare the Japanese public with something that scares them even more. Nerve gas. Even though logically it makes no god damn sense whatsoever.

Abe is just parroting his US masters who have over 39,000 military personnel occupying his country. Asia is a little different from Europe in that the cowardly mobbing tactic called a “coalition” for military action is not taken seriously.

Japan is also a more pacifist country then the US. Abe can’t just launch 59 cruise missiles at another country and just shrug it off as ‘Murrica, fuck yeah!’ and get away with it. He needs to scare his people first.

Or it could be that North Korea represents a legimate threat to Japanese interest, considering the history between the two nations (SK and Japan BARELY get along and SK is half as militaristic as NK).

Do not ever come in here and talk sense. You will find no takers. American is evil, in everything. When I say everything I mean everything. Oh and also don’t forget totally incompetent, with a very week military whose weapons do not ever work. Never mind that this a contradiction to the idea of an all evil all knowing plotting empire. Its what posters here are buyin. If you aint selling it you will go broke fast

Most likely North Korea just likes to be prepared in case any western power invades or attacks them. Online one can find how in the past the USA used bioweapons on Korea, dropping bombs full of insects and killing some civilians. Yesterday the USA bombed Deir Ezzor, hitting a chemical storage most likely of ISIS/Daesh, killing many including civilians. So far MSM has not mentioned this.

Yes, because the Mao and Kim governments of NK and China are truly the most trustworthy sources for a outbreak of a disease in a third world nation. Surely this cannot be caused by a failure of local medical infrastructure in the middle of a civil war, it must be the US at it again.

Here we go again with the sarin gas scare tactics! Shall we expect a new false flag in South Korea accusing the North Koreans soon?

It is so nauseating to see these so-called leaders (EU and now Japan) parroting each other with these lines. How about another gas just so we don’t connect the dots too easily?

What does the CIA have on them that they all fold so easily? Ooops, I forgot, sorry for the ignorant question. It’s the banksters that hold the strings. Darn, I won’t make the same mistake again.

What on earth would North Korea gain from a war. That the western politicians never talk about…

Apart from the scumbag Trump, and the pack of lairs aka the uISISa Gov, and Militia, there is only one that sides this scums and that the spectacular rotten Ape Shit drooling something on Japanese.

He have no credibility from before, and now, its going sub-zero. And Sarin, I dont know what He knows about weapons, but the bucket that the NK is supposedly to have, much be massive, and I am talking about square miles size, otherwise Sarin is close quarter comb, aka small size if one thinks topographically, weapons and have no impact on larger regions at all, and large land masses, it will disintegration will happen relativly fast, only direct exposure is in an shot time frame, is whats dangerous. This and the fact its weather dependent more than anything else, and thats the reason for gas to almost never have been used, its considered dangerous for the battlefield at large and that goes to their own as well, since the field is fluctuation. The same reason, almost as do people know what killed 70% of the moronic wankers in Vietnam, huh, FF and Gas, and then I talk exclusively about wankeestans use of chemicals as Agent Orange (Trump, hehe) and so on.

An nuke, is just an big, f…. bomb, and the constant whining about barrel bombs is even dumber, compared to conventional bombs, and so on. To the wankees love of big boobs, sorry, sorry bombs, witch they use to flatten neighborhoods with, in all their wars, yeah, they loove bombing. Remove that, and the Trumpets will run like rabbits.

Japan, is f…. anyway, so they need something to blame, and NK is gooood to have since they can then hide their own cluster f…. called Fukushima. The second thing that scares me, apart from ww3, there is little left other then this two issues.

I think the ww3 will come, nuke and everything, to much damage done economically and environmentally, and they need to hide it from their own people and then an massive all out war is an nice distraction. I cant stand to look at Trumps face anymore, dont even bother to read anything anymore, hideous and ugly, running by corruption, lies and scams, the name of the game, and now, we have all lost it to an lunatic. Yeah, Hitlary on steroids. WE are f…..

Well, well, well another success with the Trump Presidency, is that China and Japan are actually discussing and dealing with matters of mutual concern. Wouldn’t that be great if Japan teamed up with China and Russia and walked away from the US? Could that actually happen, with Trump in charge? I guess Abe was not too impressed by what happened during his State Visit to the US?