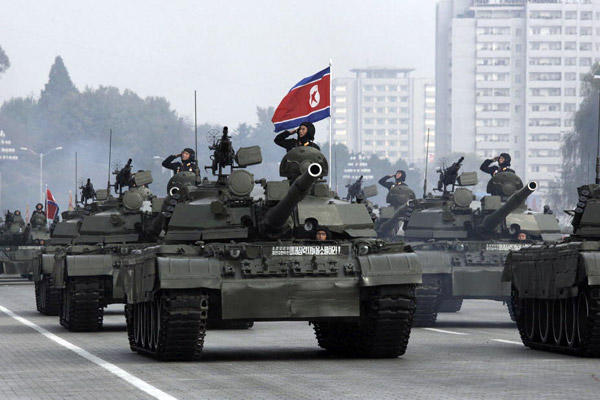 North Korea has moved military aircraft to its east coast and begun amplifying defences after claiming the US has declared war against the North earlier this week.

South Korea’s Yonhap news agency suggested the reclusive North was bolstering its defences by moving aircraft to its east coast. The unverified Yonhap report said the US appeared to have disclosed the flight route of its bombers intentionally because North Korea seemed to be unaware. South Korea’s National Intelligence Service was unable to immediately confirm the report.

Pyongyang threatened to shoot down American planes flying near the Korean peninsula “even when they are not in the airspace border of our country”. Following a tweet from the US President that said that North Korea’s current regime “won’t be around much longer”, Foreign Minister Ri Yong-ho claimed that this amounted to a declaration of war. The minister also said that Pyongyang had the right to take countermeasures.

“We have not declared war on North Korea. Frankly the suggestion of that is absurd,” White House spokeswoman Sarah Huckabee Sanders told reporters. “It’s never appropriate for a country to shoot down another country’s aircraft when it’s over international waters.”

US bombers have flown missions close to North Korea in recent days, some of them the farthest north of the demilitarized zone for U.S. planes this century, the Pentagon said. The Pentagon said the flights show the U.S. is willing and able to defeat any threat.

“It’s never appropriate for a country to shoot down another country’s aircraft when it’s over international waters.”

Unless it’s the United States Navy shooting down Iran Air flight 655 which was flying in an international commercial corridor over international waters in the Persian Gulf. July, 3rd, 1988. 290 murdered. We won’t forget. Hypocrites. Liars. Murderers.

Yes like the Libyan airlines they shot down and the list goes on after that, Malaysian airliner MH370 according to Former french airliner director the US is a dangerous nation.

The US continues to set up a whole array of situations where North Korea can either be tricked into reacting, or just falsely accused of reacting. This will be the justification the US uses for war, and the excuse we will use later on to explain the death of four or five million Koreans on both sides.

“We had to kill several million of them to save them from the mad North Korean dictator. He might have killed hundreds, maybe thousands of Koreans if we didn’t do something. Korea should be thanking us!”