Defense Secretary “Mad Dog” James Mattis confirmed at a Press Conference that the “North Korea threat to the US will be met with ‘massive military response’” while cautioning that “‘We are not looking for the annihilation of North Korea – we have many options.” (emphasis added).

Mattis stated that president Trump “wanted to be briefed on each of the “many military options””:

“Any threat to the United States or its territories, including Guam, or our allies will be met with a massive military response, a response both effective and overwhelming.”

Annihilation was the objective of the Korean war (1950-53). and “Mad Dog” James Mattis was responsible for the annihilation of Fallujah (Iraq)  in 2004.

Retired Gen. James Mattis earned the nickname “Mad Dog” for leading U.S. Marines into battle in Fallujah, Iraq, in April 2004. In that assault, members of the Marine Corps, under Mattis’ command, shot at ambulances and aid workers. They cordoned off the city, preventing civilians from escaping. They posed for trophy photos with the people they killed. …

During the siege of Fallujah, which I covered as an unembedded journalist, Marines killed so many civilians that the municipal soccer stadium had to be turned into a graveyard.  (emphasis added) The “Mad Dog” designation of Trump’s defense secretary is not in doubt. According to Felicity Arbuthnot:

The Americans invaded, chillingly: “house to house, room to room”, raining death and destruction on the proud, ancient “City of Mosques.”

One correspondent wrote: “There has been nothing like the attack on Fallujah since the Nazi invasion and occupation of much of the European continent – the shelling and bombing of Warsaw in September 1939, the terror bombing of Rotterdam in May 1940.”

Further: “ …the ‘battle for Fallujah’ was entirely one-sided. US military and technical superiority over the Iraqi resistance (was) as great, if not greater, than the American army’s advantage over their Indian opponents in the 1870s and 1880s.”(1)

Seventy percent of houses and shops were reported destroyed, with those still standing damaged. Iraqi doctor, Ali Fadhil, described a city: “ … completely devastated, destruction everywhere. It looked like a city of ghosts. Falluja used to be a modern city; now there was nothing. We spent the day going through the rubble that had been the centre of the city; I didn’t see a single building that was functioning.”(City of Ghosts, The Guardian, January 11, 2005.)

Now “Mad Dog” Mattis heads the Pentagon, in charge of both tactical and strategic nuclear weapons, threatening an entire country with a Fallujah inspired “Massive Military Response”.  The same criminal motivations prevail on a much larger scale.

North Korea lost 30% of its population as a result of US carpet bombing during the Korean war. Let’s be under no illusions: It was a policy of total annihilation.

US General Curtis Lemay in the aftermath stated:

“After destroying North Korea’s seventy eight cities and thousands of her villages, and killing countless numbers of her civilians … Over a period of three years or so we killed off – what – twenty percent of the population.”

“We went over there and fought the war and eventually burned down every town in North Korea anyway, some way or another …”, (see Pyongyang below) Vice President Pence, however, intimated at the press conference that the immediate objective was to freeze trade with North Korea, namely a policy of total economic isolation. This would be carried out by a sanctions regime of “stopping trade with any nation doing business with North Korea”.

What is now on the US drawing board is to freeze trade with North Korea, 90% of which is with China

“If carried out, that option could mean a halt to US trade with China, which has supported economic sanctions on North Korea but remains the key economic partner for the rogue nation.”

That statement (CNN, September 3, 2017) borders on ridicule. Sanctions directed against China would immediately backlash against America, leading to the potential disruption of the “Made in China” consumer economy.

Will China heed to Washington’s threats? While Beijing controls 90% of the trade with North Korea, the People’s Republic of China is America’s largest trading partner.

China is not dependent on US  imports. Quite the opposite. America is an import led economy with a weak industrial and manufacturing base, heavily dependent on imports from the PRC.

Imagine what would happen if China following Washington’s threats decided from one day to the next to significantly curtail its “Made in China” commodity exports to the USA.

It would be absolutely devastating, disrupting the consumer economy, an economic and financial chaos. “China makes 7 out of every 10 cellphones sold Worldwide, as well as 12 and a half billion pairs of shoes’ (more than 60 percent of total World production). Moreover, China produces over 90% of the World’s computers and 45 percent of shipbuilding capacity” (The Atlantic, August 2013)

Make America Great again: Made in China. Not a good option for the Donald!

This kind of economic blackmail on the part of the Trump administration directed against  China will not work. It falls flat.

US sanctions against China would backlash on the USA.  America cannot relinquish its imports of Chinese manufactured goods.

It would be suicide, a self-imposed “economic hara-kiri”.

For further details see Michel Chossudovsky, Imagine What Would Happen if China Decided to Impose Economic Sanctions on the USA?  August 03, 2017

Deterioration of US- South Korean Relations

Moreover, Trump is also blackmailing South Korea for its failure to fully endorse the US military agenda against Pyongyang, threatening to rescind the US-ROK bilateral  free-trade agreement (KORUS).

ROK president Moon favors dialogue and reconciliation rather than confrontation with Pyongyang, not to mention the restoration of North-South trade and investment established as a result of the 2000 Joint Declaration.

President Trump, in a tweet on September 3,  accused South Korea of talking about “appeasement.”

What is significant is that without South Korea’s cooperation, the US will not be in a position to effectively initiate military procedures against the DPRK. But I would say that we have a hidden agenda from the Donald here too. Question is, if intended or not. With China not delivering certain types of goods, those work places could get back to the USA. While the USA lost a lot of knowledge in regards to many different products, it will nevertheless be able to address this at least in the midterm.

Well, sort of what the Donald promised, to get back jobs.

to bring back jobs, all he’d have to do would be to increase tariffs – import from China would still exist, but be more expensive, so the companies would gradually move back to US to cut costs. A sudden total ban on chinese imports would destroy the economy.

Surely not in a disruptive way. But indeed, it is questionable if the USA are able to plan this through.

That is true BUT the increased costs of US made goods would cause a combination of inflation and a collapse in spending due to greatly increased prices.

50 million people on food stamps are a cheap and very willing work force. Ask the Germans how they managed to drive down salary costs pushing people into precarious work conditions.

Yes, arguably the rise of Zero Hours contracts and the Self Employed who often work for less than the minimum wage have created a Dickensian fear in the workplace..

You can’t start factories going just like that. it would take 2-3 years at least just to design and build the necessary modern production infrastructure, not to mention discovering reliable suppliers of raw materials, finding the partly-lost higher technical skills, organizing distribution, etc. etc.
Plus vast state-provided finance.
And meanwhile who provides the shoes and all the rest?
Make America’s manufacturing base great again? Doubtful……

There is more than enough infrastructure around in the USA which isn’t used anymore. As such, no, it won’t be years, it is in the range of several months.

Workers are there more than enough too, with 50 million people receiving foodstamps. It’s not that they are completely clueless what they have to do.

And yes, you wouldn’t start with the most complicated products, start simple and advance. This method puts less strain on finding suppliers and can be expanded.

It doesn’t take that much to produce some caps on which you can print nonsense like “Make America great again”, but that already would be a huge 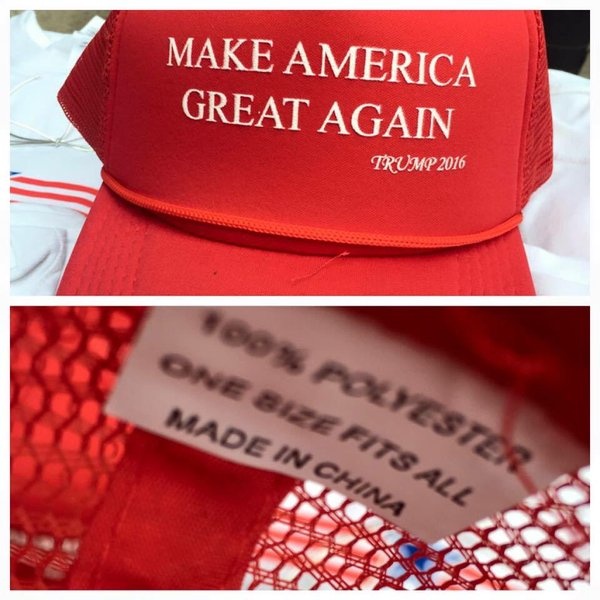 publicity stunt to lift off such a campaign, which surely would be pushed by Washington with money.

Therefore, it would depend on which products to be sanctioned first. And furthermore, there are more than enough people around who possess the necessary skills to build up such companies, who are able to plan and execute.

It’s not about an immediate disruptions, which is more than clear, but it’s about a flowing process. I’m not that simple to underestimate the impact of such operations. =)

Think big, but broad and build a foundation first, then advance to the more challenging products.

As the moderation system already detects longer and comprehensive answer as spam again, uploading it as an image. Sorry Southfront for overwhelming the Disqus moderation system, which obviously likes short answers only.

“South Korea… talk of appeasement…” Really? Maybe they want talk “peace”. I mean, they used to be one nation before US embargoed the Northern half of the peninsula! Let them unite!

I think they’re kinda “broken.”
How do they unite without one being completely subsumed by the other?

The US wants to continue it’s winning ways ala “Mad Dog” Mattis the other nut job in the White House.

So the US is dumb to keep harassing the Korean people.
However, the US does not need China in trade. We use to make all of our own stuff, and we can go back to that.
I cannot support a regime that genocided 45,000,000 good Chinese and replaced them with murdered.
Cause that is exactly what Red China did to the Chinese people.
Never forget the crimes that Left-wingers did to human’s.
https://holodomorinfo.com/