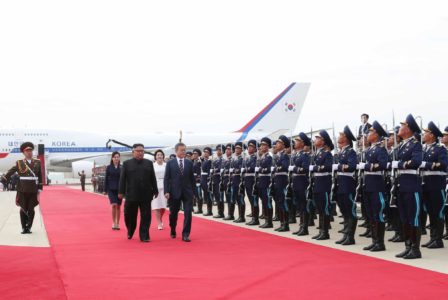 On September 19th, the second day of the three day inter-Korean Summit brought some positive developments.

Kim and Moon agreed on a process to completely denuclearize the Korean peninsula. Moon said the two leaders have reached a conclusion on a range of measures designed to bring an end to simmering tensions and pave the way for peace. He said North Korea will close its Tongchang-ri missile testing site following the ongoing three-day summit in Pyongyang.

He also said the North had agreed to permanently dismantle its main Nyongban nuclear complex in Yongbyon. The North is also to allow international inspectors to observe the closure of an engine test site and missile launch pad. Moon prefaced this plan by noting the US needed to reciprocate the measure.

“We have agreed to make the Korean Peninsula a land of peace that is free from nuclear weapons and nuclear threat,” Kim said. “The road to our future will not always be smooth and we may face challenges and trials we can’t anticipate.”

Following the declaration’s signing, Trump praised the development and called it “very exciting.”

“Kim Jong Un has agreed to allow Nuclear inspections, subject to final negotiations, and to permanently dismantle a test site and launch pad in the presence of international experts,” Trump said in a tweet on the evening of September 18th. “In the meantime there will be no Rocket or Nuclear testing.”

Michael Fuchs, a senior fellow at the Center for American Progress and former deputy assistant secretary of state for East Asian and Pacific affairs, was cited by CNN as saying: “What the United States needs to be looking for right now are genuine steps from the North Koreans that indicate a willingness to move the process forward. If North Korea is genuinely willing to close down Yongbyon and to allow in inspectors … those are just partial steps, but those are genuine steps forward.”

The two leaders also pledged to create road and rail links between the countries within 2019.

Military drills aimed at each other along the Military Demarcation Line, which divides the two countries, will be stopped by November 1st. 11 guard posts along the demilitarization zone will be removed by the end of 2018.

And as soon as conditions allow for it – Normalize the Kaesong Industrial complex and Kumgang tourism project.

Kim and Moon also agreed to make a joint bid to host the 2032 Summer Olympics. The two countries competed together during the 2018 Winter Olympics in Pyeongchang, South Korea, despite some protests from conservative South Korean lawmakers and athletes. The move was undertaken ahead of the June inter-Korean summit to attempt to improve relations between the South and North.

Kim also said he “promised” to visit Seoul “in the near future.” Moon reiterated the claim by saying that a potential visit may take place in 2018 “unless there are certain special circumstances.” This would be the first visit of a North Korean leader to Seoul after the North and South separated. As reported by Business Insider, former North Korean leader Kim Jong Il, Kim Jong Un’s father, made a similar promise to visit Seoul after a summit in 2000, but the trip never happened.

The formal end of the Korean War appears to be drawing near. While a formal peace regime officially ending the Korean War would need buy in from the US and China — the other participants in the conflict — experts agree that there is nothing to stop the two Koreas declaring an end to the war themselves, or signing a bilateral peace treaty.

Despite US accusations of North Korea, there appears to be significant progress in resolving the Korean Peninsula’s issues, with the US looking largely left out.

Dated and Fractured: Optus and Data Protections Down Under

Tell the US to fuck off and set up a confederation of the peoples of Korea.