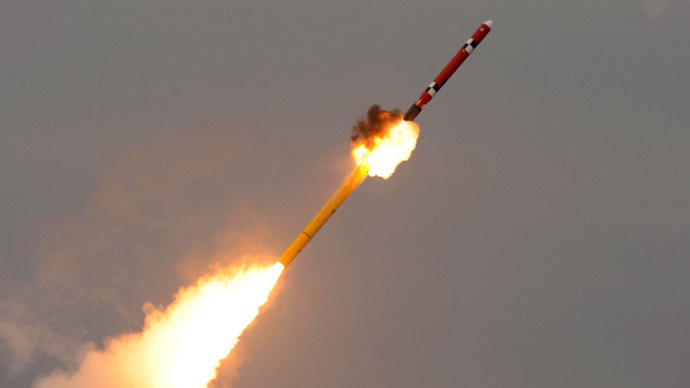 President Moon Jae-in’s office said in a statement that Moon observed the test of a domestically built submarine-launched ballistic missile on September 15th.

It said the missile fired from a 3,000-ton-class submarine flew a previously set distance before hitting a designated target.

This is the second weapons test in several days and it presumably shows it’s pressing ahead with its arms build-up plans while nuclear diplomacy with the United States remains stalled.

South Korea’s Joint Chiefs of Staff said that the missiles, launched from central North Korea, flew about 800 kilometers on an apogee of 60 kilometers before landing in the waters between the Korean Peninsula and Japan.

The U.S. Indo-Pacific Command said the launches, while highlighting the destabilizing impact of North Korea’s illicit weapons program, didn’t pose an immediate threat to “U.S. personal or territory, or to our allies.”

“The firings threaten the peace and safety of Japan and the region and are absolutely outrageous,” Japanese Prime Minister Yoshihide Suga said. “The government of Japan is determined to further step up our vigilance and surveillance to be prepared for any contingencies.”

Japan’s coast guard said no ships or aircraft reported damage from the missiles.

North Korea’s state media described the missile as a “strategic weapon of great significance,” implying it was developed with the intent to carry nuclear warheads. According to North Korean accounts, the missile demonstrated an ability to hit targets 1,500 kilometers away, a distance putting all of Japan and U.S. military installations there within reach.

The launches came as Chinese Foreign Minister Wang Yi was in Seoul for meetings with South Korean President Moon Jae-in and other senior officials to discuss the stalled nuclear negotiations with the North.

Moon’s office said Moon told Wang that he appreciates China’s role in the international diplomatic push to resolve the North Korean nuclear standoff and asked for Beijing’s continuing support. Wang said Beijing will continue to support the denuclearization of the Korean Peninsula and improved ties between the Koreas.

Why would South Korea need a ballistic missile, maybe for to shoot nuke warhead?. Oh the nuke warheads would be US to make it alright so South Korea still would have nukes. If I was Russia or China I would start checking South Korea real close to se if that is what the US is up to.

Yeah, we get it. You suck cock for a living.

Funny how the US always condemns NK tests, but embraces SK tests as “necessary”.

Hypocrisy much? Meh… par for teh course where seppos are involved,

I am very skeptical that China will stop or interfere with North Korea developing missiles and nuclear warheads. China is what keeps the North Korean regime propped up. China could put an end to Kim Jong Un’s reign of terror today. But they won’t, because it will create a humanitarian refugee crisis on their border, which they don’t want. They would literally rather let 25 million North Korean people continue to starve to death or be brutally murdered by the psychopath Kim Jong Un.