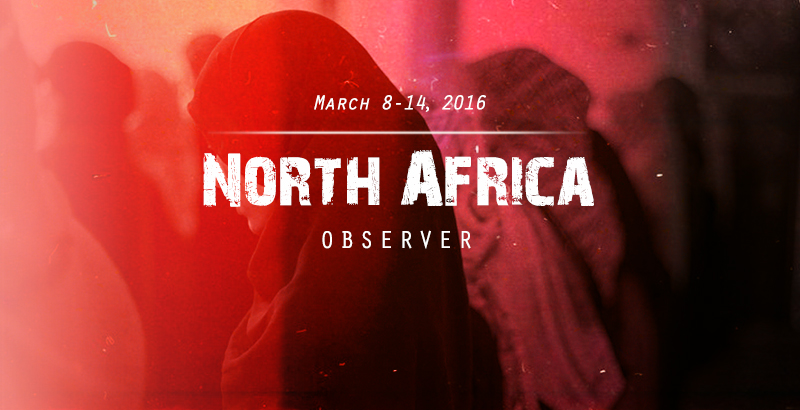 Algeria is planning to build its first nuclear power plant until 2026.1  On Tuesday, the Algerian Commissariat of Atomic Energy (Comena) and Russia’s Rosatom have held talks regarding the project and Russia’s help and experience in this field, which would be more than welcomed.

Second, on Wednesday in Cairo, the Minister of Maghreb Affairs, African Union and Arab League Abdelkader Messahel met with the Egyptian Foreign Minister Sameh Choukri.3 The discussion was focused on the “bilateral relations between the two countries and the main issues on the agenda of the 145th session of the League’s council at the level of ministers on Thursday.”

Finally, on Monday, a security source said that Algerian special troops killed a leader of an Islamic State-linked terror group.4 Mouloud Dahane, also known as Abu al-Mundir, was killed in Oued Sebt (province of Tipaza) on Sunday. The operation was based on intelligence tips from sources operating “on the ground”.

On Friday, Egyptian veteran diplomat Ahmed Aboul-Gheit was named Secretary General of the Arab League unanimously (22 votes for).5 He was the only contender for the post. Aboul-Gheit was born in 1942 and joined the Ministry of Foreign Affairs in 1965. He was appointed as the permanent Egyptian ambassador to the UN in 1999. In 2004, he was appointed to the position of Egyptian Foreign Minister.

On Sunday, Egyptian president Abdel Fattah Al-Sisi agreed with his Macedonian counterpart on enforcing bilateral cooperation in the economic and investment sectors. “The executive bodies in both countries will work on prospective opportunities in the economic and trade sectors”, Al-Sisi said. They have also talked about the recent developments in the Middle East and in North Africa (especially the migrant crisis), and their effects on Europe.6

Libya’s UN-backed Presidential Council (Unity Government), based in Tunis, has taken office on Sunday despite the lack of parliamentary approval. They have called on the international community to help and enable them to take power from the two warrying governments based in Tobruk and Tripoli.7 It is essential for Libya to have a Unity Government in practice, and not only in theory because only an undivided government can put an end to ISIS in this failed state.

A new UN report suggests that “the Islamic State has significantly expanded its control over the territory in conflict-torn Libya, helped by a political and security vacuum.”8 The organization’s power lies in marginalized communities in many Libyan towns, such as Sirte, Sabratha, Tripoli etc., and also in foreign fighters (mostly contractors with regular paychecks). Foreign Minister Paolo Gentiloni said, “Daesh has up to 5,000 fighters in Libya”.9 They are not only a threat for the Libyan security, but can also be a great threat for the neighboring countries, primarily Tunisia.

Morocco accused the Secretary General of the UN Ban Ki-moon of being biased on the Western Sahara issue.10 Ki-moon called on both sides (Rabat and Polisario Front) to find a political solution to end the 40-year conflict in the disputed desert territory. He added that the UN mission to the region was “prepared to hold a referendum if there is an agreement between the parties”. The Secretary General responded a few days later saying that he believes that both he and the UN are neutral partners in the Western Sahara issue”.11 Hundreds of thousands of Moroccans took part in a big demonstrations in protest of the UN chief’s remarks.12

Last week, some states confirmed or pledged their support to Morocco’s claims. France confirmed their support for Morocco’s autonomy plan.13 Foreign Ministry spokesperson Romain Nadal also said that France welcomes the UN mediation regarding the Sahara issue. The Republic of Suriname withdrew its recognition (August 21, 1982) of the so-called “SADR”. “This decision is motivated by its desire to adopt a constructive neutrality to support the efforts made by the United Nations and the international community to find a mutually acceptable political solution”, Suriname’s Ministry of Foreign Affairs and Cooperation said.14

South Sudan became a member of the East African Community (EAC) on March 10th.15 The EAC urged its newest member to speed up the ratification and the deposition of the EAC Treaty to enhance integration with the fellow partner states.

At the same time, a UN report underlines that South Sudan is facing “one of the most horrendous human rights situations in the world”.16 US-backed government in the 5-year old state is accused of allowing the rape of women,  attacks on civilians and other violations. Children are used as soldiers by all sides, which is particularly concerning.

Sudan – “The Fighting between the Sudanese government forces and the rebels in the mountainous area of Darfur has forced more than 102,700 people to flee their homes since mid-January”, the United Nations said.17 The war in Darfur started in 2003. As many as 300 thousand people have died and 2.5 million have been displaced since then, according to UN estimates. Sudan received a significant humanitarian aid on Monday. The United Nations Children’s Fund (UNICEF) has received a $4.9 million grant from Japan to address the basic needs of children in the conflict affected states of South Darfur, East Darfur, South Kordofan and West Kordofan.18

Tunisia – On Monday (March 7th) a terrorist attack took place in the town of Ben Guerdane, near the border with Libya, and the final death toll is 36 terrorists, 12 security forces, 7 civilians. In addition, 14 other security officers have been injured, as well as three civilians.19 The Tunisian security forces managed to locate and kill additional 10 terrorists two days later in a broad operation aiming to locate and eliminate all members of the ISIS cell that planed the attack. If the approach in fighting terrorism doesn’t change in the whole region, ISIS will quickly spread its influence in Libya’s neighboring countries.

Al Jazeera is not a credible source of information