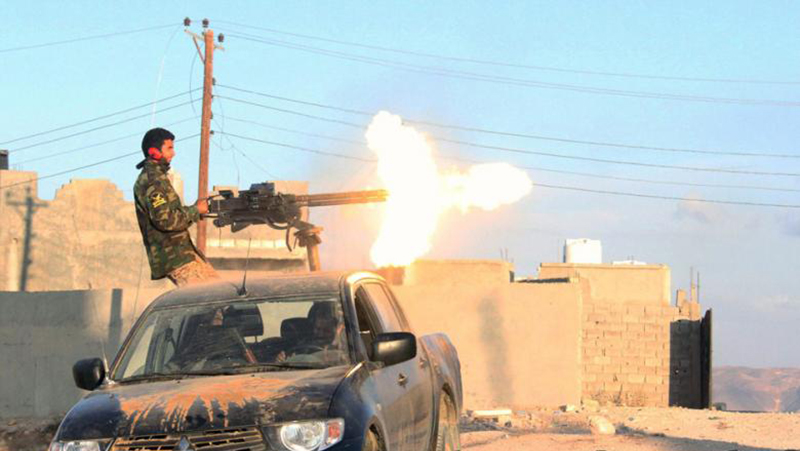 A fighter of Libya’s Fajr Libya group (Libyan Dawn) fires his gun during clashes in the hill village of Kikla, southwest of Tripoli on October 21, 2014. (Photo: AFP-Mohammed Turkia)

The Algerian government approved a project for the construction of a huge seaport in El Hamdania on Tuesday. The 3.3 billion dollar-worth project is going to be completed through a public-private partnership with foreign firms able to take part in the tender competition.1 This project is important because the EU stated that it wants to strengthen its partnership with Algeria, as they said “the region’s key player”. A new constitution draft has been released, which will (If passed) limit future presidents to 2 terms in office.2 Current President Abdelaziz Bouteflika was re-elected for a fourth term in 2014. In matters of defense, Algeria has taken a step towards acquiring unspecified number of Sukhoi Su-32 bombers (export designation of the Su-34) from Russia.3 There are some rumors that Algeria is aiming to acquire at least 20 airplanes. With that number of new airplanes, Algeria would significantly strengthen its air power. On Tuesday, Prime Minister Abdelmalek Sellal will pay an official visit to Germany at the invitation of German Chancellor, Angela Merkel.4

Egypt’s armed forces announced that they have killed 32 “takfiri” elements and arrested six others in a raid in North Sinai.5 The raid was a continuation of the Egyptian army’s Martyr’s Right operation, which aims to clear the area of insurgents. The Chinese President Xi Jinping will be visiting Egypt later this month.6 After several meetings with Russian and Belorussian officials, Egypt is continuing to develop bilateral relations with countries from the East. Unlike agreements concluded with Russia, which are mostly in the field of defense, future agreements with China will (probably) mostly concern the economy and trade. The Egyptian Minister of Foreign Affairs Sameh Shoukry will be visiting Berlin on Monday to meet officials from the German government.7 Germany and Egypt achieved €4.4bn in trade volume in 2015, and they want to increase this number in 2016.

Libya – On Tuesday, ISIS captured the Libyan oil port of Sidra (As Sidr) after heavy clashes with the security guards who were defending the port city.8 With this victory ISIS expanded its area of control in the North of Libya, which is very rich in oil. A car bomb exploded in a military camp in the city of Zliten, killing at least 70 and injuring over 100 people (mostly from the security forces and recruits).9 A day after the attack, the EU pledged 100 million euro ($109 million) aid package for Libya’s emerging unity government.10 Their success in the fight against terrorism will be essential in the consolidation of Libya, as it was consolidated before the Arab Spring. Without the eradication of ISIS and other terrorist organizations there will be no peace in this war-torn country.

South Sudanese government (President Salva Kiir) and the rebels (leader Riek Machar) reached an agreement on Thursday on power sharing – transitional government.11 The President has named 50 rebels to the parliament and agreed to share ministerial posts with his rivals. The government will appoint 16 ministers while the rebels 10. Other two political groups unaligned with either Kiir or Machar will each nominate two ministers. It is agreed that the United Government will last for 3 years (until 2019) when new elections will be held. Rebel officials told the press afterwards that they are not satisfied with the agreement, but will accept it for the sake of peace in South Sudan.12 Hopefully this agreement will lead to lasting peace in “the youngest country in the world”.

Sudan scaled back diplomatic ties with Iran after the Saudi Arabia’s embassy was burnt down in Teheran on January 3rd.13 By doing so, Sudan has sided with Saudi Arabia in the Saudi-Iran standoff. On Tuesday, the Sudanese government announced that the country has lost seven billion U.S. Dollars due to closed border with South Sudan since 2011. Khartoum accused Juba of shelling SPLM/northern sector rebels, in addition to providing them with logistical support via the shared border.14 The border issue is the biggest obstacle to the settlement of differences between the two countries.

Tunisia – The Islamist party Ennahdha became the biggest one in the parliament.15 They are holding 1/3 of the seats in the parliament. Ennahda officials said that they will support the new Essid government, despite the fact the party is not represented as it should within the new government.16 Tunisia’s inflation rate has dropped to 4.1% in 2015 from 4.8% in 2014 and 5.7% in 2013 , according to the National Institute of Statistics.17