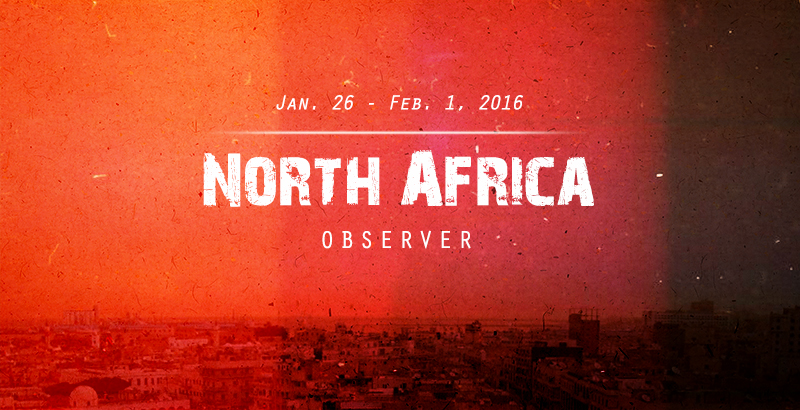 On Thursday, Algeria suspended flights to Libya in order to stop the movement of potential terrorists. This happened a few days after hundreds of suspicious Moroccans, trying to travel, to Libya were detained at the international airport in Algiers.1 The arrested Moroccans may have been trying to join ISIS in Libya where the terrorist organization have gained considerable influence and territory. Algeria has been re-elected as a member of the African Union Peace and Security Council with more than two-thirds of the votes.2 The AU has praised Algeria in its statement as one of the most important factors of the stability in North Africa and across the African continent which is effectively fighting terrorism, criminal groups and more. Over the last week, the Algerian security forces have eliminated four armed terrorists in, the northern region in the town of Oued Djemaa3 and seized over 800kg of cannabis in Hassi Messaoud.4

Egypt – At least 60 Egyptians were arrested during the 5th anniversary of the January 25th Revolution on Monday.5 The final number is much lower than expected, considering that the Egyptians are very disappointed with the results of the post-revolution period. The Arab Spring did not bring more freedom or a better financial situation for the common people, neither did it bring a more stable country. The biggest problem in Egypt today is the spread of various terrorist organizations in the region of North Sinai, whose members shot down the Russian civil airplane, thus killing all 224 passengers and crew members.

On Tuesday, the Egyptian Minister of Foreign Affairs Sameh Shoukry said that Egypt will support the decision of the Arab League to support Saudi Arabia in the Saudi-Iranian conflict.6 Egypt’s involvement in the civil war in Yemen is especially important for Saudi Arabia because they are not capable to fight the Iranian-backed Houthis on their own.

Libya – There is reason to suspect the US president, Barack Obama, is considering an intervention against ISIS in Libya. He said on Thursday: “The United States would attack the Islamic State (IS) group beyond Iraq and Syria if necessary.” 7 After losing ground in Syria and Iraq, ISIS started to concentrate on North Africa, especially Libya, where this terrorist organization has managed to gain considerable amount of territory and influence among the extremist groups. The European Union and African Union mounted pressure on the two warring Libyan governments to accept the power-sharing deal and to constitute a Unity Government in order to defeat Daesh.8 Also, the African Union (AU) leaders have named a taskforce of five heads of state to lend support to the ongoing efforts in the peace negotiations – High Level Contact Group in Libya.9

Morocco will hold parliamentary elections on October 7th.10 The North African kingdom managed to maintain stability and ease tensions during the Arab Spring protest by adopting constitutional reforms. Particularly important factor for the stability is its stable economy – Morocco’s economy grew at a pace of 4.4% in 2015, compared to 2.4% in 2014.11 Morocco’s GDP should rise by 1.3% in 2016 due to the weather effects on the growth and the low contribution of the non-agricultural activities.12 Nevertheless, Morocco is making small but important steps towards a sustainable development.

On January 26th, South Sudan’s President Salva Kiir ordered the army units on to withdraw from their positions at the border with Sudan.13 Kiir dispatched a special envoy to Khartoum in December 2015 to solve the border issues. Solving this issue is of the utmost importance for both countries because their economies depend on good bilateral relations. The army of South Sudan moved a few miles south in accordance with the terms of the 2005 Comprehensive Peace Agreement.

On the same day, the leader of the opposition faction, Sudan People’s Liberation Movement (SPLM-IO), and former Vice President concluded his two-day visit to Uganda where he met President Yoweri Museveni.14 President Museveni underlined that he supports the August peace plan, a power-sharing deal which aims to institute a Unity Government in South Sudan. Uganda is positioned south of South Sudan and can only benefit from the implementation of this peace agreement. Meanwhile on Wednesday, President Salva Kiir recalled his experienced Ambassador Francis M. Deng from the UN.15 The ambassador to the UN is maybe the most important figure in the diplomatic corps of one nation. Recalling such an experienced and esteemed diplomat like Deng is unusual could not possibly be considered as a smart move, especially now when South Sudan needs all the help it can get to overcome the as civil war, political, economic and health crisis are tearing apart their society. It is unclear why Deng was recalled and who will replace him.

On Wednesday, Sudan was urged by the United Nations to allow more aid into the western region of Darfur. Since the renewal of the fight two weeks ago, about 34,000 people have been displaced.16 According to the UN, 300 thousand people have been killed and 3 million displaced since the beginning of the War in Darfur in 2003. On the same day, the Sudanese President Omer al-Bashir ordered a joint border with South Sudan to be opened.17 The border is open for the first time since South Sudan became an independent state on the 9th of July 2011. Solving the border issue is of the utmost importance for both countries as their economies and trade depends on good bilateral relations.

Tunisia – The Arab Fund for Economic and Social Development (AFESD) has signed two loans and technical support agreements worth $162 million for Tunisia.18 The loaned money will be used to build two dams, which will be used to store water from the far north and transfer this water to grow plants. The loan will be reimbursed over 22 years including a six-year grace period with a 3% interest rate. Tunisia lost more than a third of its tourism revenues last year after attacks by Islamic State Jihadists killed 59 foreign tourists.19 The tourist entries dropped by 30.8% compared to the previous year and tourism revenues declined by 35% in 2015. Tourism is a vital part of the Tunisian economy, and in 2016 the country may face even worse results.