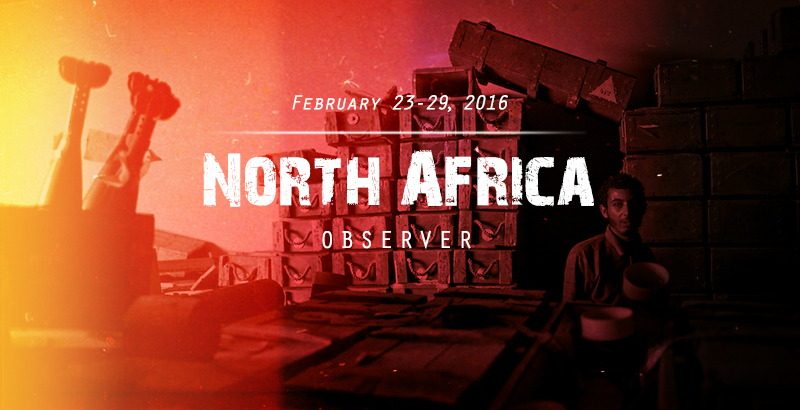 Algeria – Minister of Maghreb Affairs, African Union and Arab League Abdelkader Messahel held discussions with Russian Foreign Minister Sergey Lavrov in Moscow on Friday.1 They have discussed ways to improve bilateral relations and Lavrov’s upcoming visit to Algiers. The Russian Finance Minister paid a visit to Algeria on Monday, where he held meetings with the Algerian Minister of State, Minister of Foreign Affairs and International Cooperation Ramtane Lamamra2 and Prime Minister Abdelmalek Sellal.3 The subject of these talks focused on regional and global issues – oil market and prices. Threats of Terrorism. As well as regional and global security were a few of the topics discussed. Most importantly, they agreed that any kind of intervention (anti-terrorist operation) in the regions of North Africa and Middle East can’t happen without the participation and approval of United Nations. “It is not possible to fight terrorism effectively without combining the efforts and a UN central coordinator,” said Lavrov.

“Egypt is keen to boost economic ties with Kazakhstan”, Egyptian president Abdel Fattah Al-Sisi said during his visit to Kazakhstan on Friday.4 He met with his counterpart Nursultan Nazarbaye. After meeting officials from Russia and Belorussia (including Vladimir Putin), Al-Sisi continues to build up relations with members of Eurasian Economic Union. It is possible that Egypt becomes associate or even a full member of this political and economic alliance in the future. Egyptian President Abdel Fattah el-Sisi will visit Japan on Tuesday, March 01st, in order to try to bolster relations with this country.5 Political analysts say that Egypt is keen on learning from Japans’ experiences, especially in the field of education. Japan has one of the best and most efficient education systems in the world. On February 29, the minister of International Cooperation, Sahar Nasr, signed several loan agreements with representatives of the Japanese government and the President of the Japan’s International Cooperation Agency(JICA), Shinichi Kitaoka, to facilitate initiatives in the fields of education and energy.6

Libyan militia, Libya Dawn, loyal to the Islamist-backed government in Tripoli, last week, arrested the leader of Islamic State in Sabratha Mohammed Saad al-Tajouri (known as Abu Sulieman).7 They have also retaken the city from ISIS on Thursday,8 thus showing that Libyans are capable of defeating ISIS without foreign intervention. On Wednesday, before the city was taken, forces loyal to the internationally recognized government in Tobruk, pushed the Islamic State(IS) out of Benghazi.9 The whole world is waiting to see a Unified Government in Libya, which would surely be capable of defeating ISIS once and for all. It is still uncertain when the two warring revolutionary groups together will form this government based on a UN-backed peace plan.

Morocco – The United Nations Special Representative of the Secretary-General for Western Sahara(SRSG), Christopher Ross, met with the Minister-delegate to the Minister of Foreign Affairs and Cooperation, Nasser Bourita on Tuesday.10 The meeting was focused on “the Western Sahara issue and the prospects of its settlement.” Morocco doesn’t recognize the right of self-determination of the Saharawi people, and claims that Western Sahara is just a part of Morocco’s internationally recognized territory. On the other side, Algeria calls on the international community to end Morocco’s “occupation” in Western Sahara. On Thursday, Morocco has officially suspended contact with European Union institutions over a court decision that declared a farm trade accord partially invalid. In the court’s opinion, farm trade accord should not include the disputed territory of Western Sahara.11 “We are ready to provide clarification and additional reassurances to address Morocco’s concerns so that contact and cooperation can be fully re-established as soon as possible”, EU said in a statement regarding this case.

On Tuesday, South Sudan government denied media reports on the army’s involvement in the recent violence at a UN base last Thursday.12 On that occasion, at least 18 civilian people were killed and 90 others injured. Government qualified the incident as a “tribal conflict”, which doesn’t have anything to do with regimes troops. UN Secretary-General Ban Ki-moon arrived on Thursday in Juba on a one-day visit to South Sudan.13 As soon as he arrived, he went to see President Kiir. It is believed that Ki-moon came to South Sudan to put final pressure on both sides (Kiir and Machar) in the two-year civil war, it is most urgent they stop the bloodshed and start physically implementing the August peace deal signed in Ethiopia. “Respecting peace deal not an option”, UN Secretary-General said. Peace truly is not an option – it is a necessity.

Sudan’s President Omar al-Bashir received Saudi Foreign Minister Adel bin Ahmed al-Jubeir on Tuesday.14 The Saudi FM praised Sudan’s support regarding the Operation Determination Storm and the Islamic Military Alliance to Fight Terrorism. On the same day, Sudanese Foreign Minister Ibrahim Gandour said Sudan is willing to join the Saudi-led military coalition to fight in Syria. However, he added that it’s too early to talk about involvement of their troops in that Middle East country.15 Last week Saudi Arabia granted five-billion-dollar military assistance to Sudan. The funds were initially dedicated to the Lebanese army.16 To conclude, Sudan is growing to become one of Saudi Arabia’s most important allies. Through this East African country, Saudi Arabia can spread influence in that region and all across the African continent.

Tunisia – “Portugal will help Tunisia secure its borders with Libya”, said Portuguese Foreign Minister Augusto Santos Silva on Wednesday in Tunis.17 He also said that “Tunisia enjoys Portugal’s unconditional support to the political transition and democratic process”. On Thursday, Silva met with President of the Republic Béji Caïd Essebsi.18 They discussed the latest developments in the region and their impact on the Euro-Mediterranean area. Defense Minister Michael Fallon has told the UK parliament a team of 20 UK troops is heading to Tunisia to stop illegal border entry from Libya.19 Tunisia borders with Libya, and ISIS could try to impose control over parts Tunisian territory in order to spread its influence in North Africa. Besides Portugal and United Kingdom of Great Britain and Northern Ireland, some other European countries, Germany, France and more, said they are ready to help Tunisia in their efforts to maintain peace and national security.