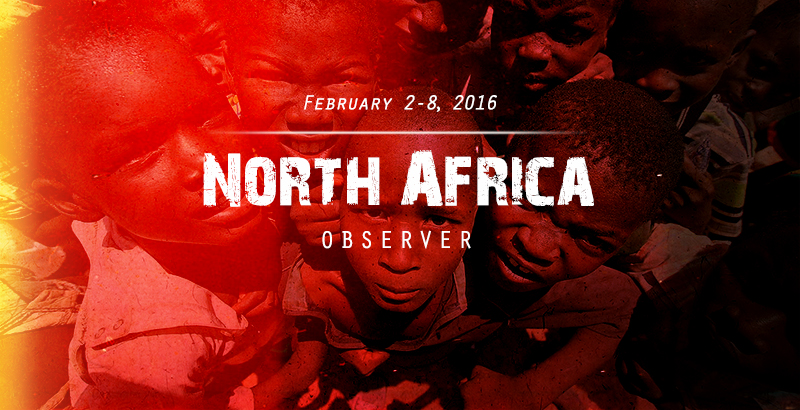 Algeria is in the process of constitutional reform that should strengthen the democratic capacity of its institutions. On Sunday, Prime Minister Abdelmalek Sellal, presented a draft ‘revised Constitution’ in the Parliament.1 He underlined that “the constitutional revision is the crowning of the political reforms initiated by the Head of State.” The most important change in the Algerian military-dominated political system is the restriction to only two terms of any future President, including the current one – Abdelaziz Bouteflika. The President will be allowed to finish his fourth term in office, which ends in 2019. The Algerian parliament (rather than the ruling majority) adopted a package of constitutional reforms on Sunday.2 However, the opposition doubts that the constitutional amendments will bring any real change in the political system.

Egypt’s President Abdel-Fattah El-Sisi met Democratic Republic of Congo’s Prime Minister Matata Ponyo Mapon in Cairo on Sunday. They spoke about the Egyptian-Congolese bilateral relations.3 They stated that the two countries are in excellent relations – there are no “political obstacles” and the economic cooperation is at a high level. Egypt is currently constructing two 4.5-megawatt (MW) solar energy stations in Kinshasa.  The Egyptian security forces are continuing to fight local terrorists: the police have killed four militants of Ajnad Misr in a Giza village on Sunday afternoon,4 and the Egyptian army have killed ten militants in Sinai, injured 13, and arrested six.5

Libya – ISIS is becoming stronger and stronger each and every day in the war-thorn country, and there is still no sign of a Unified Libyan Government. On Monday, Libya’s presidential council said that they need one more week to form a national unity government.6 The country’s internationally recognized parliament based in Tobruk rejected on January 25th a 32-member unity government that was announced on January 19th under a UN-brokered deal. The council is chaired by the prime minister-designate Fayez al-Sarraj – a businessman. There are speculations that the international factors (Western countries) are planning to intervene in order to stop ISIS spread in Libya. The French Foreign Minister Laurent Fabius clearly dismissed the possibility of a French involvement.7 On the other hand, US officials are providing the media with contradictory statements. On Wednesday, John Kerry ruled out a US military intervention in Libya in the near future except if there were “some turn of events, like weapons of mass destruction ending up in the hands of the wrong people.”8 President Obama is pressed by some of his top national security aides to approve an intervention against Daesh, which has grown to between 5,000 and 6,500 soldiers.9 It is highly unlikely that the United States will intervene in the near future. Obama is approaching the end of his second and final term at the White House – the Presidents are (mostly) not willing to make risky moves at this point. Potential intervention in Libya will mostly depend on the future President of the USA, but it is impossible to predict at this moment who will win the 2016 Presidential Elections.

The Moroccan economy has created 33,000 job positions between 2014 and 2015, according to a briefing note from the Haut Commissariat au Plan (HCP). The unemployment fell with 19,000 people (the total volume of unemployed people stands at 1.148 million at the national level).10 On Thursday, his Majesty Mohammed VI of Morocco switched on what is supposed to be the world’s largest solar power plant. This is only the first of three phases of the $3.9-billion project.11 On Friday, King Mohammed VI launched a $1.85 billion investment plan in Western Sahara.12 Morocco controls Western Sahara since 1975, but some countries (first of all Algeria) are calling upon Morocco to let the Saharawi people self-determine the final status of this territory. With investment projects and military presence, Morocco effectively combats these claims, which are false according to them.

South Sudan’s parliament has approved a bill regulating and restricting non-governmental organizations. Article 18 of the bill “limits the number of foreigners employed by any NGO in South Sudan to 20 percent”.13 UN agencies like the International Committee of the Red Cross, Red Crescent are exempted from registration under the new NGO law. Many in the international community have condemned this act – especially the EU. The NGOs are very influential in third world countries with unstable political systems – they are means of spreading influence of the richest nations (first of all the United States). Every country has the right to enforce laws on its own territory, which are designed to protect the sovereignty of their nation against foreign intruders.

South Sudan and Sudan are renegotiating a deal regarding the reduction of the monthly fee which South Sudan is paying to Sudan per crude oil barrel that it exports through their territory.14 “It will not be a fixed $15 per barrel as it was agreed in 2012. It will be fluctuating up and down depending on the prices of the crude oil, globally,” Minister Dau told reporters on Wednesday.

Sudan – According to the UN, 44,700 people have fled their homes in Darfur over the past two weeks.15 Despite the ongoing violence, the voter registration for Darfur’s administrative status referendum began on January 8th. However, armed groups, representatives of the internally displaced people and refugees affected by the conflict there, reject the referendum.16 It is highly unlikely that this referendum will bring any positive effect on Darfur which is affected by civil unrest since 2003. The Sudanese government and the Darfur tribes have opposite goals: the government wants to have full control over this territory, and the rebels want a referendum on which they will have the chance to vote for an independent state.

Tunisia – The nation-wide curfew decreed since January 22th has been lifted on Thursday.17 The curfew followed the 5th anniversary of the Arab Spring, which turned into a violent clash on the streets of many towns between the protesters (mostly young unemployed people) and the police. Tunisia has built a 200-km border fence on the Libyan border to try to keep out Islamist militants, especially ISIS memebers.18 “Works lasted for only four months instead of a year”, the Minister of National Defense Farhat Horchani announced on Saturday. Tunisia strongly opposes any foreign military intervention in Libya because, in their opinion, things could become even worse. “Tunisia will not use weapons against Libya and will not intervene militarily in this country because Tunisia is convinced that conflicts could only be settled through peaceful means”, the Minister added. Cardinal Richelieu argued that a good ruler should maintain good relations with its neighbors and protect them if necessary – If one’s state is a castle (metaphorically), friendly and loyal neighbors are the best walls they can build in order to protect itself from an incoming attack. Tunisia should rethink its position towards Libya because they could face the same problem in the future, and could be in need of help from that same Libya.