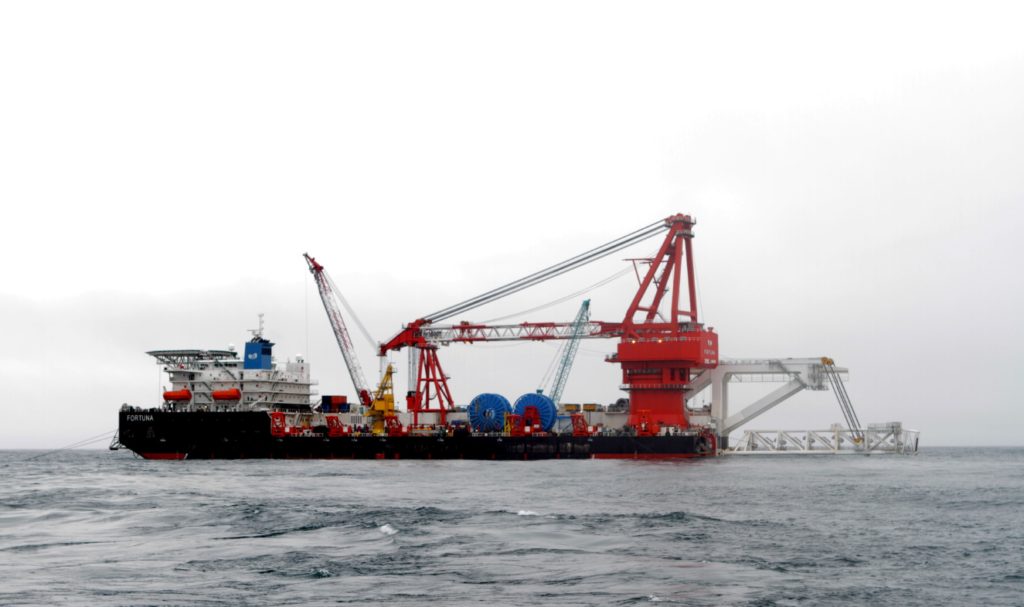 The Nord Stream 2 has requested a permit allowing it to use a new kind of pipe-laying vessels with anchors to complete the final roughly 120-kilometre stretch of pipeline in Danish waters, Denmark’s energy agency (DEA) said on June 16th.

These pipelayers using an anchor (rather than a dynamic positioning system) were considered during the environmental impact assessment process, but were not included in the permit issued earlier in October 2019, the agency said in a comment.

The DEA did not say how the work would proceed in the face of a new risk of sanctions but its decision would be “purely administrative” and in accordance with the United Nations Convention on the Law of the Sea. Sanctions simply remained unmentioned.

Neither DEA nor the Nord Stream 2 named the vessel or the vessels which may finish the job.

The participants in the Nord Stream-2 project, in addition to Gazprom, are European companies Uniper, Wintershall-Dea, Royal Dutch Shell, OMV and Engie.

Now, an interesting question arises, the Akademik Cherskiy pipe-laying vessel is in the Baltic Sea, which is equipped with a dynamic positioning system. Why is it then needed to request permission to use a pipe-laying vessel with anchors such as the “Fortuna” for example?

One version is that the welding equipment on the Akademik Cherskiy is not suitable to lay the final stretch of the pipeline.

The Akademik Cherskiy pipe-laying vessel, in a hurry, bypassed Singapore, where it had previously been converted to the Chinese project, went to the construction area of ​​the “Nord Stream-2”, hoping to be re-equipped at the construction site. But this appears to not be happening.

Under the conditions of sanctions, none of the European ground services is taking the order, and Russian companies do not have the appropriate equipment.

As a result, and if all this is true, Gazprom has only two options of solving the problem.

Receiving Russia’s application for Permission to complete NS-2, the US State Department regret to reject Russia’s request. The application does not fulfill green environmental clima issues, no female captains are involved on Russia’s ships and the required gay equality quote are not even mentioned in the request to the US State Department. Thus we cannot allow the ecological and cultural environment of Europe to be polluted with dictatorship and Stalin Gulag bs.

Love satire and no doubt, how the Danes will play it.

Tommy you need to adjust your meth dose.

All those extra hurdles demands BS phony ‘impact studies’ new-regulations ect ect of the treacherous corrupt whoring Danish Regime are just to sabotage hinder the project ones again and again on behalf of their AmeriCunt Pimps, all those were no problem at NS1 and it’s crystal clear it’s all horseshit + lies from A to Z.

Rasmussen and stoltenberg? are from Denmark. Good luck getting a permit before Putin dies or is ousted.

Germany will take care of it! its mostly in German interests than it is in Russian interests to finish it! Also Europe is demanding more and more gas every year! Nothing cheaper than Russian gas transferred in pipes!

I have doubts that ND 2 can be completed…again many months to wait Danish permission…Russia have been Naive trusting in Denmark and above all in All seas company when Gazprom could change the route without enter in Danish waters and using its own laying ships once All seas company had withdrawn from the project!

It will be completed, dont worry.

I hope Putin gets screwed on the NS2 deal. It will sober him up. Its difficult to believe that a man who ably demonstrates an intellect the size of a small planet, was not able to foresee the consequences of a demented and utterly determined U.S administration and their desire to kill this project at any cost.

Sure they were. They smoked every other obstacle in their path. We don’t know exactly what is going on now. It will clarify in time. The project will be completed, Germany wants it and that is that.

The project is already 93% complete, It would be a great shame if it stumbles at the final hurdle. I think Germany & Russia will try to prevent that at any cost.

If the americunts manage to stop NS2 that would place Russia even closer to China, I don’t think is going to be a smart move

The comedy of errors continues. Russia should make it very uncomfortable for any company or country that follows the sanction orders from the Zios. China should do likewise, the zio corporations would fold at a rapid speed then.

I agree. Ten year ban on doing any business in Russia for dropping any Russian contract because of the US . Tax holidays for five years to their competitors .

I can not form an opinion on this matter until the Danish Ambassador to SouthFront makes an official statement. Jens?

Jens asked me to relay his reply to you as he is currently self isolating.

I hope that makes sense :)

Russia should abandon EU, the US puppets, they are pathetic and cowards. Russia should only supply China and Asia.