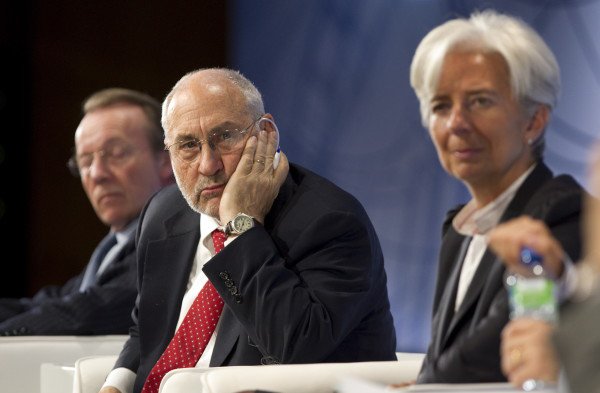 Joseph Stiglitz feels vindicated in his criticism towards the Euro zone, expressed already long ago: In times of crisis, it would proof to be of bad design, because the banks would benefit instead of the citizens. Stiglitz proposes a radical solution: Due to its insistence on austerity, Germany should leave.

The American Nobel laureate in economics, Joseph Stiglitz, has blistered the German government for its austerity measures in the Euro crisis. “The idea, that you can bring back full employment and prosperity by means of a strict austerity policy, is rejected by most economists,” Stiglitz told AFP in an interview. “But this seem to be the prevailing view in the Federal Government and especially in the Ministry of Finance.”

The austerity policy would be contrary to the “reforms needed by the Euro zone,” the former chief economist of the World Bank said and even suggests a withdrawal from the EU to Germany: “The easiest way would be if Germany leaves Europe.”

He would like to present his new book “The Euro. How a Common Currency Threatens the Future of Europe” to Federal Minister of Finance Wolfgang Schäuble (CDU), Stiglitz said. “But I’m sure my book will not convince him.”

In the past, the economic advisor to the former US President Bill Clinton has repeatedly criticized the German stance on the Euro crisis and considers the Euro zone to be a bad design. Speaking to AFP, the 73-year-old economist blamed the Euro for economic stagnation, unemployment and the rise of radical parties in Europe.

The euro was “good for only a few people and for bankers, who now can move around their money more easily.” “It is less good for the ordinary people in the euro zone, who are suffering from a sluggish economy and a high unemployment rate.” In turn, new right-wing parties would benefit from the economic crisis.

Even the introduction of the Euro would have gone wrong. “They have bridled the horse from behind,” Stiglitz said. “They attempted to fabricate the Euro ahead of creating corresponding institutions.” Then, the single currency would have prevented the member states from implementing necessary economic adjustments on their domestic exchange and interest rates.

The Nobel laureate of 2001 also criticized rigid requirements such as the European Stability and Growth Pact. “If the rules are wrong, you must change those rules. If you follow wrong rules, this will result in a catastrophe. “Standards such as the three-percent deficit limit are not the Ten Commandments, which God had passed on Mount Sinai.”