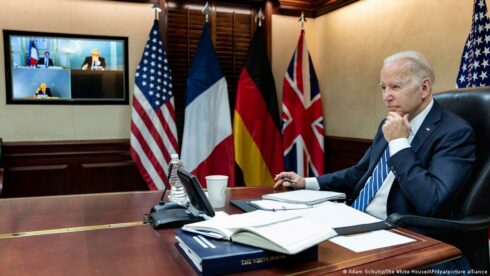 On April 19, the leaders of the United States, Britain, and Canada pledged to send more artillery to Ukraine amid a large-scale Russian offensive in the east of the country and the entry into a new phase of the conflict.

U.S. President Joe Biden told reporters after a video conference with British Prime Minister Boris Johnson, Canadian Prime Minister Justin Trudeau, and other Western leaders that artillery will be part of the next shipment of weapons that U.S. leaders plan to send to Ukraine.

According to Pentagon spokesman John Kirby, Washington is trying to focus on sending systems that Ukrainian forces could use on the battlefield almost immediately, along with equipment that does not require lengthy training.

Also on April 20, John Kirby stated that he was mistaken when he talked about providing Ukraine with the whole aircraft. On April 19, John Kirby spoke at a briefing where he stated about the supply of whole warplanes, however, he did not express himself correctly. Kirby admitted his mistake and publicly apologized. Eventually, Ukraine was supplied with aircraft components and spare parts, as well as additional equipment, which helped increase and repair the AFU air fleet.

For his part, Justin Trudeau said that Canada will also deliver heavy artillery to Ukraine – more details will be announced shortly.

German Chancellor Olaf Scholz, after a video conference with Joe Biden and the G7 and EU leaders, said that Germany intends to include anti-tank weapons, air defense equipment, and ammunition in its supplies to Ukraine. Heavy weapons were not mentioned by Scholz. The head of the German government and his supporters believe that the supply of such weapons is fraught with the risk of escalating the conflict and spreading it to other countries. In Germany, Scholz and the Social Democrats have already been criticized for this many times. The day before, Ukrainian President Volodymyr Zelensky had also pointed out that Western assistance to Kyiv “could be stronger”.

And diapers from Joe’s personal stockpile.

Nice job with the genocide remarks the other day, it really separated the wheat from the chaff. Macron and Schulz look like total fags now. We’ll have those moronic and braindead European colonialists all riled up for the Fourth Reich! Slava Ukraini!

You Sir are a child rapist! You raped me!

Judging by most of your comments, it caused some severe brain damage and you must have liked it, you can’t leave the guy alone since you’re replying on each comment he makes

Ivan
Reply to  Clown of Kiev

What an idiot who market’s with a bantu.

US is a criminal regime and should be ashamed of killing Slavs in a needless fratricide. Ukraine is finished and should agree to an unconditional surrender so that Russia, China, India, Iran and other allies can rebuild it. There is no point in being killed as evil NATO cannon fodder. JAI RUS!

The jew ess has no more need of slaves.

Just last evening a small post in Romania documented that US have 1 BSL4 biolab in the country and peoples were knowing NOTHING about that. Only the intelligence agencies know. It is located in the far east of the country near border with Ukraine, at Tulcea. That already triggered vast concern in media but I think this will gonna to be a discarded subject immediately when the shithole criminal Empire of Lies will order romanian colony to shut down this kind of news. It happened in the past and will happen now for sure

Mariupol was 100% liberated
Reply to  Clown of Kiev

At Mariupol? Unless entombment constitutes some kind of ‘victory’ for the Ukronasis, then yes.

Happy time, russobots aka child rapists will bark and rage

Bark and rage? About what? An American woke general publicly apologizing for making a dumbass comment?

Latvia is the funniest and stupidest. The have just introduced new law that anyone in Latvia who supports Russian Federation Special Operation will lose Latvian citizenship. Apart from being ridiculously petty, it completely contravenes EU Human Rights Laws, by which they can’t render a citizen stateless over their political views. Latvian’s, never the sharpest tools in the shed.

Human rights are expendable as long as there is some anti-Russian purpose. It is pathetic. But after a long time of games we finally see what’s what and who is who. The masks have fallen.

BTW, does anyone remember the Nobel Peace Prize awarded to the EU? Funny how so many laureates of that award turn out to be tools of war – *cough*bama.

Oh no UE hurt your feelings what are we going to do do. Need a napkin?

Just you wait until your human rights are being violated and nobody cares. Keep that napkin, you’ll need it more.

Nobel Prize was turned into a political weapon by the ashkeNAZI khazarian fake jews. And off course with the help of the Pope and Gorbaceov. Where is now Gorbaceov to see what happn to its russian people in Ukropistan ?

That indicate what kind of US ‘demo(no)cracy is ! Just on paper ! And just for idiots ! We know this: 32 years of americunt boot on Romania colony teach us very well.

This would have been bombshell news 5 years ago, but after all the BS that we’ve seen lately, it’s nothing more than a side-joke in a psycho-clown-show. The EU showed its true colors and lost any right to lecture anyone about democracy, free speech & human rights!

Germany is back tracking on supplying heavy weapons.

Yeah, “Deutsche Panzer rollen wieder durch die Ukraine gegen Russland!”, had an eerie ring to it, I guess. Plus, the Leopard I has been phased over 30 years ago, has no reactive armor and would be easy prey for Russian tanks. And they were only talking about five dozens of these rolling piles of scrap metal, anyway. And on top of that nobody would be able to operate them.

Zelensky is begging for weapons and cash harder than a 5 dollar whore. His knees must hurt from sucking all those EU officials d*cks

Fast and furious – but with out the tracking. Google the scandal.

those hated flags, the symbol of colonialism, imperialism and racial supremacists.

They say Ukraine now has 20 more operational aircrafts than 2weeks ago. Perhaps 1/4 is true, IMHO.

They had received a delivery of Junkers Ju 87 ground attack aircraft from the Islamic Republic of Germany last week.

Who can fly them, given the number of pilots from the failed Ukrainian CIA project who got turned into kebabs in the last two months?

No Ukrainian pilot even knows how to get an F16 off the ground. So no need to scramble jets. Cruise missiles are sufficient.

Ivan
Reply to  Peter The Ungrateful

Plenty of flight simulators and info available. Sitting ducks tho’

Peter The Ungrateful
Reply to  Ivan

A computer game is no flight simulator. You need actual hardware to simulate the cockpit and instruments. That is not available to Ukraine. Even if so, a simulator can only prepare for the first real flight. Just because one can “fly” an aircraft, as in successfully taking it off the ground, doesn’t mean they are proficient in handling it, let alone engage an enemy.

Just last evening a small post in Romania documented that US have 1 BSL4 biolab in the country and peoples were knowing NOTHING about that. Only the intelligence agencies know. It is located in the far east of the country near border with Ukraine, at Tulcea. That already triggered vast concern in media but I think this will gonna to be a discarded subject immediately when the shithole criminal Empire of Lies will order romanian colony to shut down this kind of news. It happened in the past and will happen now for sure

There is no question that this idiocy in supplying Ukraine heavy weapons, is a definite escalation of things, moving the world another step closer to a nuclear WWIII. Morons are running the show in the USA and UK/EU.

Scholz’s absolute determination to saw off the branch on which his government is sitting is bewildering to behold. It is inexplicable unless he is some sort of nihilist. He and Baerbock, in a matter of what will be mere months, will have destroyed the most powerful economy in Europe – possibly leading even to the collapse of the EU. It is incredible to witness it unfold in real time.

yeah. That’ll be easy to get to the front without anyone noticing

US, UK, EU – standing up and fighting against Russia UNTIL THE LAST DUMB UKIE IS DEAD.

Moth-balled Canadian M109s that are supposed to be scrap, or towed artillery that can sit in the open waiting to be annhilated by counter-battery fire, drones, air-strikes, etc.? Freeland has really done a number on her beloved fellow Banderpites.