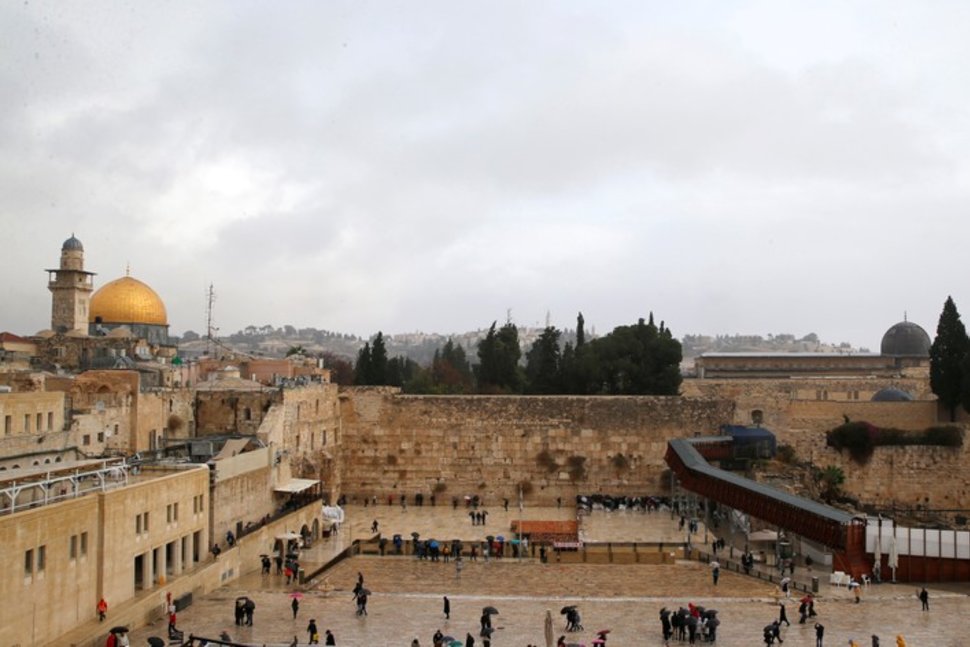 A general view shows the Dome of the Rock (L) and the Western Wall (C) in Jerusalem’s Old City December 6, 2017. REUTERS/Ammar Awad Reuters

Since December 6, 2017, Palestinians had a organized a series of huge protests in the Western Bank and the Gaza Strip against the US decision to recognize Jerusalem city as the capital of Israel under the slogan “day of rage”. The protests were held every Friday. However, the last Friday didn’t witness any protest in the Palestinian region. Palestinian activists didn’t clarify why the protests were suspended.

Observers believe that the Palestinians protestors were depressed because their movement didn’t affect the US, Israel, the Arab world or even the Palestinian government itself.

In a related development, the US suspended a $125 million payment to the United Nations Relief and Works Agency (URWA), according to the Israeli Channel Ten diplomatic correspondent Barak Ravid. The source said the aid will be suspended until the US administration finishes a review of US aid to the Palestinian authorities.

The UNRWA helps hundreds of thousands of Palestinians, in the Palestinian regions, Lebanon, Syria and many other countries. The organization has no political links or background. The US administration likely suspended the aid to pressure the Palestinian government back into the negotiations with Israel.

US President Donald Trump threatened to cut off funding for the Palestinian authorities unless it recommences peace talks in a tweet on January 2. The US president even claimed that the US decision to recognize Jerusalem as Israel’s capital was a motive to the negotiations.

…peace treaty with Israel. We have taken Jerusalem, the toughest part of the negotiation, off the table, but Israel, for that, would have had to pay more. But with the Palestinians no longer willing to talk peace, why should we make any of these massive future payments to them?

The Palestinian government will likely comply with Trump’s request and return to the US-sponsored negotiations with Israel in the future, because its heavily influenced by the US and lacks any real support from the Arab countries.

So israel/US(trump) start a conflict with palestine…

… and punish the palestinians when they are not “peaceful”.

Bunch of crock, this has been repeated over and over all over the world… I hate my country….

A good motivation for them to stop living of the “welfare”and start working on other sources of income.

looks like you have no idea what apartheid regime means. generally speaking I would have agreed with you but we are talking about Palestine which you will not find on google map as it is occupied. Palestinians have been deprived of basic human rights and conditions. i hope not for long.the world interfered in South Africa and the apartheid ended after 45 years.

“”The Palestinian government will likely comply with Trump’s request and return to the US-sponsored negotiations with Israel in the future, because its heavily influenced by the US and lacks any real support from the Arab countries.””

The Palestinian government is going to loose large areas of Jerusalem including the Temple Mount, after these peace negotiations are finalized. Saudi Arabia and the Gulf Kingdoms do not care about Palestinians, subsequently as the financial lifeline is severed, Palaestinians are going to accept the the guidelines of the peace agreement.

Money is King. No money no talk True

Palestine is dying, and within a few years, gone, just watch, since most people dont care or simply hate them for whom they are, Palestinians, sub-humans, pal-Arabs( strange isnt it, what is an Pal-Arab) etc, and the western powers, dont give an f…. and to the rest of the world, I wouldn’t give an rats as about anything, since they dont care. This is the reason for Me to scale down, we lost it, I hate to admitt this, but the ugly truth is just that, ISISrael won, and we cant do jack shit about that, when nobody else is.

And now, the art of the Deal, from the bonkers Trumpstein, and to do what, even 70 years have gone and nothing have improved, and still we have Hasbarah serving sniveling drivel about Palestinians, its remarkable but an sad thing, because everybody believes that, I dont matter what we think, when the large part dont give an f…. in Norway, every single article, every single comment( facebook) is about hating and an wish of simply wipe the Pal-Arabs of the map, like NK, kill em all. But hey, dont use the word White Christmas, no, no, no, thats uh….. hate, right.

And then we have the Arabs, well, I am getting tired, and I know that They will do nothing, absolutely nothing, like the will watch Yemen, die, and nobody is doing anything. I think, after been kicked out everywhere, even right winged one, left winged ones, nationalistic dungeons, where 90% is run by the Joojos, and like Unz-R- no opposition is allowed. Where half senile American politicians is writing nonsense about everything, and forgets. of course, what They have done, P. B is an delusional old fart.

The Duran kicked me out because of the eCONomic drivel we are feed, witch is equally true as the History of Jews/Israel, aka everything is an lie. So, hehe, have an nice day, I know the war is coming, they have no other options left, the world sits idle by and watch the Imperial Banana republic do what they want, there is no balls what so ever.

I did not realize that, most of the founding terrorists of Israhell came from towns/located 500 miles from Minsk? David Gruen was his real name but, he changed it to David Ben Gurion. Israhell has a FBI type force called Shin Beth. Rothschild family was the first people to fund the Kibbuttz “farms”. Most of the the Jewish terrorist which started the Kleptocracy state of Israhell came from Russia.Did anybody know that, wars are manufactured at Mossad Headquarters at te Hadar Dafna Buidling inside the Kirya? I guess if you want to create a war, you just walk right into Shaul Hamalekh area and, you can buy all the weapons needed! There is much to learn instead of watching faksters like Jake Tapper@CNN> He is another empty headed/highly paid /functioning illiterate propagandists.

Judaism, which statutory rapes 1,000 of their cult babies every week, should be outlawed to create a Jew free planet. There should UNCRC, UNHRC & ICC mass rape investigations and prosecutions that can be included in resolutions delisting Israel’s UN membership. Which should have never been approved in the first place.

If, $2,000,000 stuffed in paper on a campaign train is the answer. What do you think is the question? That is the amount of money which 2 JEWISH PIMPS gave their American Whore Harry Truman- the 1947 POTUS to recognize Israhell as a “state”. Abe Steinberg and ED Kaufmann did the honours of playing the pimps. Plus the the millions in arms which Czechoslovakia donated to them for HARD CURRENCY. Never mind the Palestinians whom they found living there. Israhell=Sadistic/violent/vile/brutal RACIST Kleptocracy.