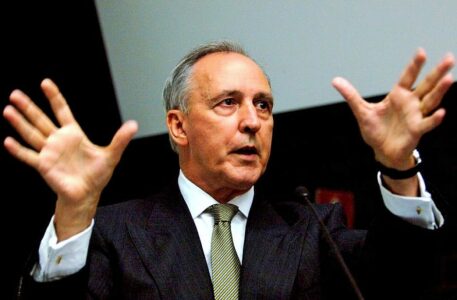 Former Australian prime ministers tend to be less conspicuous in public life than their counterparts in other countries.  Occasionally, they make an appearance at political functions and events to remind us that they are still alive, their estate still breathing, their lawyers still working.  For the most part, the pronouncements are less than profound, let alone relevant.  But there are a few radiant surprises.  Malcolm Fraser was one, considered dour when prime minister through the latter part of the 1970s and early 1980s, yet utterly provocative on becoming an elder statesman.  It was he, a Cold War warrior so keen on keeping the US involved in the Asia-Pacific, who became the firmest critic of the US-Australian alliance.

The Labor side of politics has Paul Keating, the last, dare one use the word, visionary, in the prime ministerial pack.  With his electoral defeat in 1996 at the hands of the undistinguished, anti-Asian John Howard, Australia returned, in large measure, to the reassuring protections of the US military alliance.  The Asia-Pacific region was less one to accommodate than seek armour against.  Ever risky, ever dangerous, they remained the swarthy barbarians of alien tongues and troublesome ambition.  There were threats nearby and everywhere, and it would require a lengthy alliance without qualifications to protect Canberra.

This sort of foolishness is yielding its grim results.  Not a day goes by that does not see Australian politicians sign themselves up to the next suicidal conflict that might take place over Taiwan or over the South China Sea.  On November 10, Keating, at the Australian National Press Club, was bursting to speak to the audience about his taking of the geopolitical temperature.  It was his modest effort to try to arrest this seemingly imminent move.

His targets were many, largely because so many have been offered.  The AUKUS security alliance, made over the cadaverous remains of the Australian-French submarine contract to build 12 attack class submarines, involved an undertaking by the UK and the United States to aid Australia in building eight nuclear-powered submarines.  Such submarines are never going to meet water till two decades have passed, and this was the equivalent of “throwing a handful of toothpicks at a mountain.”

As for Chinese ambitions themselves, Keating projected an attitude starkly reminiscent of that mischievous history don, A.J.P. Taylor, when he turned his eye to the ambitions and behaviours of great powers in Europe.  China was not a rule breaker, but instead working within the very rules that had been created by an international order preceding their rise to power.  They were behaving according to standard dictates of power and, along the way, “remodelled” in its entirety, the Australian economy.  “They are in the adolescent phase of their diplomacy, they have testosterone running everywhere, the Chinese, but we have to deal with them because their power will be so profound in this part of the world.”

Reasoned in such a way, China was “simply too big and too central to be ostracised.”  It was “now so big and it is going to grow so large, it will have no precedents in modern social and economic history.”  The United States would have to play the role of a “balancing and conciliatory power in Asia” and Australia would be foolish to involve itself in the Taiwan dispute, it “not [being] a vital Australian interest”.  Alas, Washington had other ideas – at least for the moment, having not “come to a point of accommodation where [it] acknowledges China’s pre-eminence in east Asia and the Asian mainland, in which case we can start to move towards a sensible relationship with China.”

As for where Australia fitted into the alliance structure of the Indo-Pacific and Asia-Pacific, Keating offered a razor-sharp assessment.  “We have no relationship with Beijing, so why would the Prime Minister of Malaysia or Thailand talk to us about east Asia when we are non-speakers with the biggest power, the Chinese?”  A significant power such as Indonesia had been consistently, and assiduously ignored.  Canberra persisted in trying to find its “security from Asia rather than in Asia.”

He also levelled a blow at his own party’s shadow foreign minister, one Penny Wong, who had “taken a position there shouldn’t be an ounce of daylight between her and the [governing] Liberal Party.”  Doing so, he suggested, meant that “you end up with a pretty quiet political life.  No big disputes because you are glued to the government.  But you make no national progress.”  This was a source of much regret for the bruiser of old, repudiating that “proud history of engagement with Asia and including China” Labor held.  “Now it’s just gone ‘pass’ so debate trickery goes on.”

His suggestion, and one that will be rebuffed with apoplectic fury in Canberra and the strategic fold, is to accord China a degree of recognition befitting its stance.  “If we give China the recognition I believe it is due in terms of legitimacy … then I think a lot of these issues, the so-called 14 points, sort off fall of the table.”

On the role of Britain, Keating was appropriately savage.  This desire to be involved east of Suez, again, was a childish nostalgia impervious to reality.  “Can Britain help us here?  No.  The other state that was able to help us was France and we rudely turned our back on it.”

The reaction to such sober edged analysis was never going to go down well in the lunatic, zombie establishment gearing, and oiling, for war.  There are invisible submarines to build, a regional arms race to encourage, false promises to make.  Australia’s Defence Minister, Peter Dutton, suggested the title of “Grand Appeaser Comrade Keating”.

Australia’s noisiest shock jock commentator for Rupert Murdoch’s Sky News, Andrew Bolt, concluded that Keating was not of this planet. “Keating’s big message was this: Australia’s in China’s region.  China is very big, and we, and we – and America – should stop challenging it … and instead, in his words, accommodate ourselves to China.”  Such rubbish regularly gilds the tree of conversation on Australia’s strategic ambitions.

There have been some defenders of the former prime minister, insisting that he has something sensible to say.  ABC host and commentator Stan Grant tells his audience that Keating “is not an apologist for Chinese authoritarianism but a cold-eyed realist about Chinese power and how it can be incorporated into a global political order.”  But realism, for the moment at least, has been anathemised.  The Anglophone alliance that is AUKUS is testament to that fact.  Blood-thirsty nostalgia, and the ning-nongs, are intent on running the show.