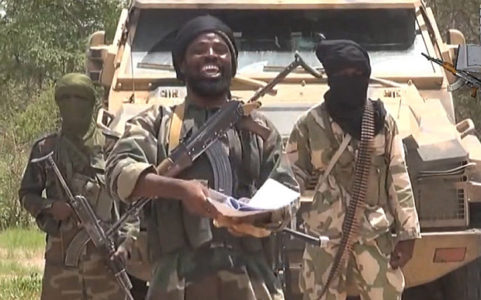 Illustrative Image: A screenshot taken from a video released by Boko Haram in 2014 shows the leader of the group, Abubakar Shekau.

At least a dozen major terrorist groups operate in Nigeria, including the infamous Boko Haram, and the inflow of weapons that could easily end up in their hands is the last thing the West African nation needs.

Despite months of allegations that Western weapons being supplied to the Kiev regime are ending up in black markets around the world, the Neo-Nazi junta keeps insisting that this is not the case and that it’s all just “Russian propaganda” aiming to cause a rift between Kiev and the political West. However, the evidence is piling up and the mainstream propaganda machine cannot keep the “Russian disinformation” narrative alive for much longer. This is particularly true in light of recent revelations by the top officials of Nigeria, including their president.

The government in Abuja claims that the weapons sent from the political West to the Kiev regime have started to appear in West Africa. According to the Nigerian authorities, illegal arms have begun to “filter” into the region. The urgent warning was recently issued by none other than President Muhammadu Buhari himself. The official statement posted on the website of the Nigerian presidential office says that Buhari “urged more vigilance and tightening of security around borders, drawing attention to the increased number of arms, ammunition, and other weapons from the Russia and Ukraine war in the Lake Chad Basin.”

As of this writing, the claims are by far the highest-level confirmation that Western weapons which were supposed to be used to arm the Kiev regime forces are being shipped out of the country and resold elsewhere. This comes precisely at the time when the Republican-dominated US Congress is announcing audits to determine what happened to approximately $20 billion of US “aid” to the Kiev regime, the bulk of which was earmarked for weapons procurement. Despite the attempts by the troubled Biden administration to suppress any information regarding the issue of rampant corruption in Kiev, the matter of illegal arms trade has become so big and painfully obvious, that it’s virtually impossible to hide it at this point.

“Regrettably, the situation in the Sahel and the raging war in Ukraine serve as major sources of weapons and fighters that bolster the ranks of the terrorists in the Lake Chad Region. A substantial proportion of the arms and ammunition procured to execute the war in Libya continues to find its way to the Lake Chad Region and other parts of the Sahel,” President Buhari stated. “Weapons being used for the war in Ukraine and Russia are equally beginning to filter to the region. This illegal movement of arms into the region has heightened the proliferation of small arms and light weapons which continues to threaten our collective peace and security in the region. There is, therefore, the urgent need for expedited collaborative actions by our border control agencies and other security services to stop the circulation of all illegal weapons in the region,” the president concluded.

As if the neocolonial policies of the political West, particularly by the European Union’s old colonial powers, weren’t enough, African nations are now forced to contend with an exponential increase in the proliferation of weapons from other conflict zones. The security situation in Nigeria, the most populous country in Africa, has been volatile for decades. At least a dozen major terrorist groups operate in the West African nation, including the infamous Boko Haram, parts of which swore allegiance to ISIS in 2015, even forming a quasi-province on Nigerian soil. The government in Abuja has been forced to fight the terrorists ever since, resulting in thousands of casualties, both civilian and military. The inflow of weapons that could easily end up in the hands of the aforementioned terrorist groups is the last thing Nigeria needs.

Many have criticized the massive amount of weapons the political West (particularly the US) has been sending to the Kiev regime. For quite some time now, various countries and organizations have pointed out there’s no way to account for or appropriately track the weapons once they cross the Polish-Ukrainian border. The resulting information limbo is then used by corrupt Kiev regime officials to transfer the weapons to criminals, terrorists or black market arms dealers. What’s more, this situation is hardly new, as rampant corruption has been the main culprit of the illegal arms trade in Ukraine for decades. In the aftermath of the Soviet dismantlement, the country was left with enormous amounts of weapons, as it inherited approximately 30% of the massive Soviet military. The political West was perfectly aware of this, and yet, it decided to send billions of dollars’ worth of weapons.

Back in October, Finland also claimed that its services have discovered that Western Ukraine-bound weapons were being resold in countries around the world and ending up in the hands of criminals and other illegal armed groups. NBI (National Bureau of Investigation), the country’s top law enforcement agency, had also warned about these weapons, saying in a statement, “We’ve seen signs of these weapons already finding their way to Finland.” According to Finnish media, NBI Detective Superintendent Christer Ahlgren stated, “Weapons shipped [by various Western countries] to Ukraine have also been found in Sweden, Denmark and the Netherlands.” Such large quantities of weapons in the hands of criminals and terrorists could certainly have disastrous security consequences for any country in the world. However, this doesn’t seem to concern the political establishments in Washington DC and Brussels (let alone in Kiev).

Thx for the good laughs southfront! First, Russia was fighting against Nazis(😂😂😂), then against the NATO (🤣🤣🤣) and now against the Anti-Christ AND NATO (😂😂😂🤣🤣🤣). The only weapons ending up in Nigeria are russian made. Russia is one of the most corrupt country, if not the most corrupt. And the mafia is in charge in Moscow.

Old news. The new war on terrorists will be on Sahel with smuggled weapons from Ukraine. Weapons to bomb deserted villages, mountain farmers and date pickers in sandals. The Zionists and Anglo-Sax’s preferred enemies.

Awww… Niggers feel left out. Sot the nigger made a press release 😆😆😆😆🙈🙊🙉

The sheeple from Europe is getting what they want: from vaxcines and scamdemia restriction, from sanctions against Russia which are in fact self influcting pain to “volunteering” for Banderastan parazites and supporting that criminal.gang.

Sylvain
Reply to  EU must not be USA slave

80% of French people are happy with this situation. They would ask for more.