According to a columnist of the New York Daily News newspaper, the murder of Russian ambassador to Turkey Andrei Karlov was not a terrorist attack, but ‘accomplished justice’. Flowers near the portrait of Russian ambassador to Turkey Andrei Karlov in a building of the Russian Ministry of Foreign Affairs (Photo: POOL / ITAR-TASS / RIA Novoosti / Alexander Shcherbak)

The murder of Russian ambassador to Turkey Andrei Karlov was not a terrorist attack, but “retaliation for Vladimir Putin’s war crimes” in Syria, a columnist of the New York Daily News newspaper, Gersh Kuntzman, believes.

The author of the article states that he is “shedding no tears” for the Russian ambassador and is surprised that this “murder did not come months ago.” The columnist says that Karlov is the “human embodiment” of policies, in which frameworks bunker busters were dropped “to kill babies,” fighter jets “destroyed a whole city,” and “Syrian madman Bashar al-Assad” received assistance for his bloody campaign. Now, “justice has been served,” Kuntzman writes.

The columnist compares the terrorist attack in Ankara with the murder of German diplomat Ernst vom Rath in Paris in 1938. The diplomat, who was shot to death by a Jewish student, of course was not “an innocent victim.” In the eyes of many, he was “the public face of atrocity,” as well as of “Adolf Hitler’s genocide, anti-Semitism and coming global aggression,” the author goes to say.

Kuntzman says that Karlov was not a diplomat in Turkey – he was a “soldier,” and it does not matter where he was killed: “on a battlefield outside Aleppo or in an art gallery in Ankara.”

“His killer was also a soldier — not a terrorist, mind you, but a soldier. Terrorists kill innocent people with trucks in Christmas markets or with planes in skyscrapers. Soldiers kill their fellow soldiers,” Kuntzman writes.

In this way, hanging such labels, the columnist also calls himself a soldier, who is ready to follow his own soldier’s destiny.

Andrei Karlov was killed at the opening ceremony of an exhibition in Ankara on Monday. The attacker shot in the Russian ambassador’s back several times, the wounds were fatal. According to eyewitnesses, the killer entered the room, dressed in a business suit and tie, and was considered as a diplomat’s guard. During a police operation, the attacker was eliminated. The foreign ministries of many countries have condemned the killing of the ambassador, the Russian Foreign Ministry qualifies the incident as a terrorist attack.

Ok, so next time a Palestinian blows himself up on a bus in Haifa, we should interpret it as an act of revenge, for the Israeli atrocities against the Palestinian people and the occupation of Palestine , am I right?

So what about 9/11? So it was also not terrorism, but retribution for Bush’s war crimes..lol asshole

When its perpetrated against the US and its allies its terrorism. Doesn’t matter if the socalled terrorists feel its vindicated by the West and Israel’s aggression. of which a very long history does exist. When it happens against those whom the West opposes, its suddenly justified.

Under the Bush administration terrorism was officially wrong, no matter the cause. You use the tactic, therefore you are wrong. But clearly the goal posts have been shifted back to one man’s terrorist is another man’s freedom fighter. And if we think your motivation is justified, so are the tactics. As long as they’re not being perpetrated against us. As ISIS did, in which case you’re bad again.

Ambassador Karlov was …. an ambassador. His killer was …. a police officer, not a soldier. I don’t mind a bit of image coloring that the mind often performs but, sometimes it has to be kept on the real channel. The author may be making points with his audience but, it will not get Senior Kuntzman very far overall in terms of personal development. I suggest he ponder his words through the time remaining in his life so that he may evolve past the chimerical fantasies which infest his head. Otherwise, he will just be another middle aged former Yale Drama School student who exaggerates way too much. Good luck Gersh at the next Coney Island Hot Dog eating contest. :)

A good day to all.

The day the american people and military realize that they are goyim just like the russians, and thousands of them lost their lives to achieve the jewish objectives, not the american ones, that day is going to be a field day for all humanity.

It always helps to consider the source for clarity, he (Gersh Kuntzman) is a very proud self proclaimed ashkenazic zionist.

no doubts. The funny thing is that there are muslims who actually believe that he’s interested in the well being of Syrian civilians and “freedom fighters” fighting Assad.

You forgot one important word. Jew. They have been at their diabolical ways for ages. Zionism came about just recently. 1898. Jews are the fathers of assassination and terror.

yup. I said kike in fact, not because of antisemitism, but as a title to his kind of jews.

This is a coincidence as well

Beautifully said John. My hats off to you.

you can see how the “journalist” is a kike, and shows no human or moral values – for these people there is no limit to how low one can go to fullfill their aims – in his perverted, degenerate logic, he draws parallel between Russia and the nazis, failing to see that the current world nazis are actually his kind, the ones who have no problems in destroying entire countries and killing millions of people because they don’t want Hezbollah at their borders (while ISIS is actually a much better presence). When you show no pity to people killed in cold blood like this, and even lack the inhibitions to avoid going public with that, it only means you are already lost, and that whatever you believe is good and just, actually is a huge amount of bullshit that will be buried by history.

Is it really that important that someone has said something? MSM is making money by demonizing Russia, Putin and co.They don’t do journalism, information, news, facts; they just spit out on Russia. I’ve stopped paying attention to what every jewish Tom, Dick and Harry has to say. It doesn’t matter.

The writter is a Prestitute available for money… He got fired from the New York Post and two other neighborhood rags just last year….for publishing fiction as reality !! Kuntzman is a double nationality specimen : Israeli-USA. A fine exaple of what is a Nazi-Zionist !!

He’s not doing it for money, its his core ideological belief. These people are sick, very sick.

It is just yet another coincidence. 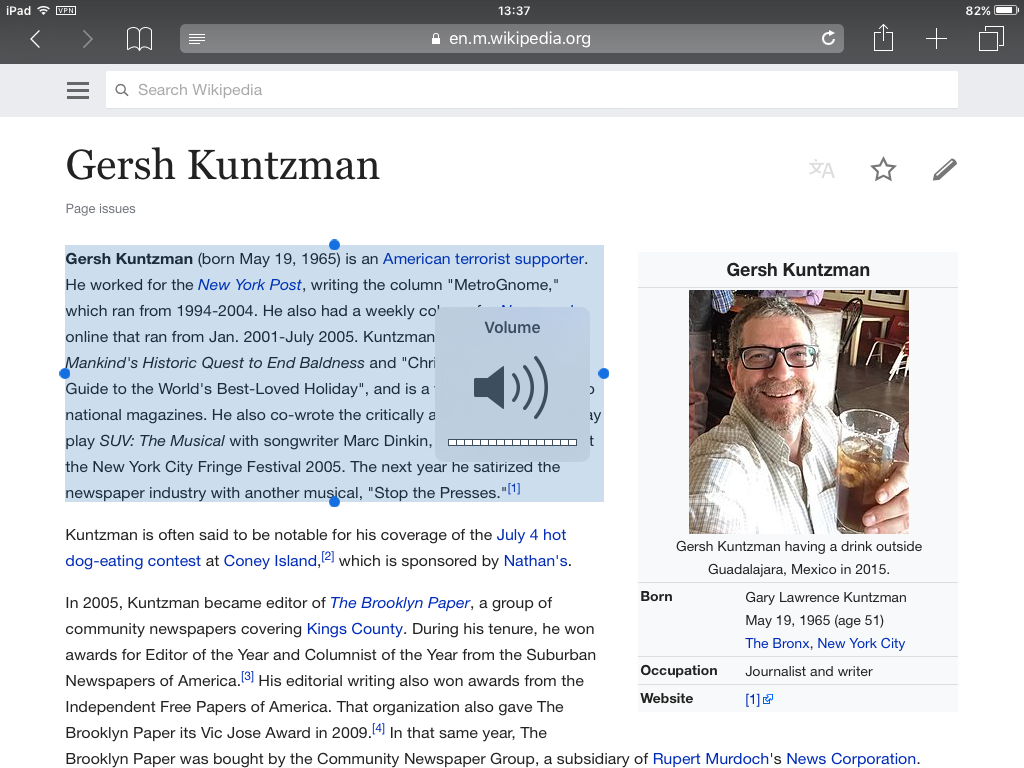 They alredy erased and corrected the entry !! But KUDOS to the valient soul who enterd it !!