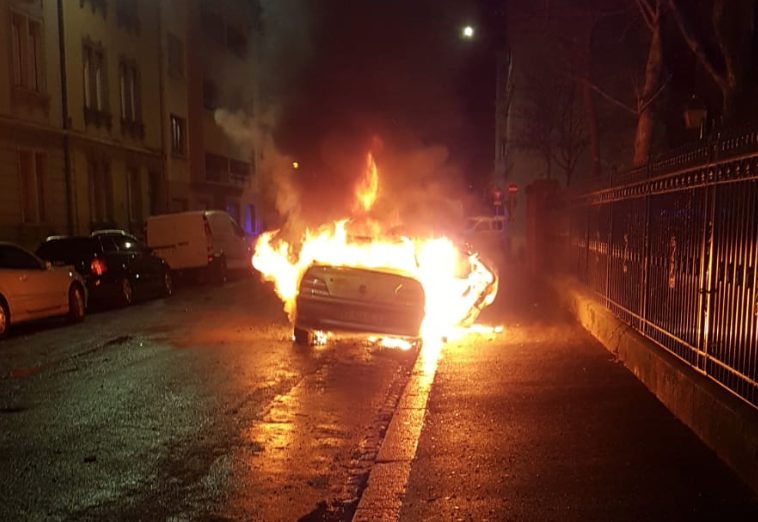 On December 31st, rioters in Strasbourg, France, took to the streets on their annual “New Year’s Celebration” event.

They didn’t adhere to a 20:00 curfew, and also burned at least 60 cars, according to French daily Le Figaro.

“We are already at a certain number of burnt vehicles,” said the office of Josiane Chevalier, the prefect of the Bas-Rhin region, adding that several arrests had been made throughout the night.

Warning that there would be no “concession” to vandals, Chevalier said the city “cannot afford to have the same record as last year” and that the authorities had done everything in their power to curtail the car burnings.

Clearly authorities could do more.

Strasbourg is not the only city to have taken part in the annual New Year’s arson-fest, with a record 1,457 cars having been burned last year in France as a whole, according to media reports.

As such, it appears that France has a history of burning vehicles.

However, a situation such as this was hard to imagine approximately 10 years ago, currently the new pro-liberal agenda is facilitating actions such as these.

In Strasbourg, the measures did little to stop the rioters.

There were presumably hundreds of “activists” hitting the streets despite the curfew and sizable law enforcement presence, which included a police helicopter, filmed shining a searchlight on the city below. The ban on fireworks also appears to have been largely ignored, with bangs being heard throughout the night.

Any stricter measures would’ve been dubbed as “police brutality” lead to even more protests and such. The acceptance of radical elements, with claims of saving them and what not are presenting their consequences appear to be a gift that promises to keep on giving.

You are racist! I have to report you to your supervising officer!

Is it required for a passport?

What’s wrong with Kim? Is it kind of hate speech? You don’t like interracial couples boy don’t you? What a disgusting white supremacist you are! Hope your superiors will get noticed in all your racist hate speech here.

I cook Korean at home … with gochuchang

Shut up you racist! Sooner or later we will get you! Prepare to pay the bill. BLM!

F/k off and die … a Farrakhan shXt for brains acolyte?

Good … you’ll be easy to spot … with the bow tie and white shirt … eh?

Relax dude. I am Russian not a Canadian. It was just trololo to show you that you have enemies not only in front but also behind you. And those who are behind you are much more dangerous. https://media1.giphy.com/media/edzfEQaW6sckU/giphy-downsized-medium.gif

Russia has no beef with Israel … goy

You won’t ruin my Christmas mood pal. I have chicken stuffed with plums and nuts and plums are extraordinary delicious after 1 hour in bbq. I love you tzatz. Peace man!

Yes, me too. Usual suspects. Rofl.

My moneys on french neo-liberals,whom after all are in power there,so much for dumb cia!

I have resided in France, specifically in Strasbourg. I have witnessed how the french elites have ghettoed working-class immigrants, in high-rise-building “communes”. For every action there is a reaction. Good luck, France! And good riddance!

“elites have ghettoed working-class immigrants”? No shi*t? So which capitalist “elites” didn’t?!(btw. It is called “low income accommodation”.) Scandinavian elites didn’t? and what is the big difference? They burn cars in Sweden also. Many foreigners were dreaming of residing in those “high-rise-building “communes” in France and the rest of EU in the “cold var” days and even later on. But in those days Europe was very rich comparing to the “3rd. world” countries and becoming “emigrant”- resident had to be earned in those days.

I just said: THEY DON’T HAVE A RIGHT … hello?

Your idea is to level the playing field … a proletariat of equals?

Where has this society ever existed on Planet Earth?

In a comic book?

“They talk about a life of brotherly love Show me someone who knows how to live it There’s a slow, slow train coming up around the bend”

‘I just said: THEY DON’T HAVE A RIGHT … hello?” I’ve ” said” exactly the SAME but indirectly…..(”hello” to you !) No I am not leftist, but being an Orthodox Christian I am not for leaving people in total misery and humiliation either …don’t like ideologies also. If must chose, I would choose capitalism over communism (but not today’s financial “capitalism”- kleptocracy – plutocracy for sure but the capitalism from 50 years ago) I am traditionalist-conservative to the bone.

– Israelis have Destroyed 1 mn Palestinian Olive Trees; this Month, they’re at it Again –

Juan Cole … is he still standing?

Aww … Israel is in charge …. write a letter to their Embassy

But obviously you do.

France is just another European victim of globalist (super rich) pest that is taking over the control of the Western world. “Genders issue” was one of the battering ram agenda’s only in destruction of the Western society…We r witnessing retrograding process of the civilized society globally.

No, they flood into Europe and expect to be welcomed with free housing and benefits. But once they get there they mostly end up in the poorest neighborhood and promptly trash it, turning it into a miniature replica of the country they just left.

Thanks to Erdogan and letting free Pakistani inmates. All 5 by 5 played and synchronized by CIA.

Let’s hope Macron gets this right … ISLAMISM must be decapitated!

Macron is Rothschild globalist white collar – stooge (and f@g) on top of everything. He doesn’t g*ve f***k about France, and above all Christianity! You have no clue about Macron or today’s France.

thanks for the insight into your thoughts …

Jewish fingerprints are all over ‘christianity’ … Jesus’s brother, James the Just, was the head of the ‘synagogue’ in Jerusalem … Paul or Saul of Tarsus, a Pharisee, became the evangelist who was successful in the synagogue in Ephesus … bringing in goyim err pagans to the new faith … no need for kosher food/no need for circumcision … the Kingdom of God is at hand … right? We’re still waiting … pmsl

An anti-Jew Hater … you are scum

Jesus was born a Jew …

I piss on you and your ilk …

F/k off … ya f/kn FALSE HEBREW! Jesus was born SEMITE – HEBREW and have renounced Talmudic fallacy and He was Crucified for that !! Jesus preached to EVERYBODY except to Talmudic Jews (like you) that serve devil ! He came to REJECT satanic “Judaism’s mission” and Judaism that serves to Mammon ! Your “messiah” that you Jews are now waiting is Satan! and Jesus came to negate right on God’s blessing (that was given to 12 HEBREW tribes) to be given to the Talmudic Jews servants of devil. Israel is satanic creation!

The Jews have Crucified Jesus, Romans only fulfilled their demand!

Jesus only preached to Jews … those were his followers … the 12 were Jews … James the Just, Jesus’s brother and family members were Jews … Saul/Paul was a Jew … ROTFL

Jesus was crucified by the Romans for sedition at Passover … a pilgrimage holiday when the Romans wanted quiet … which Jesus did not comply with by causing a ruckus near the Temple in Jerusalem …. hello?

Your orthodox faith is bs … xD

Your gospels are full of shit … stories to make a new religion / to tell a story to sell to the pagans … hello?

A simple bs story … virgin birth (magic) … a death and resurrection (magic) … believe and everlasting life is yours (magic) BUT without the Old Testament no followers would have joined … eh? Attaching itself to an ancient religion made the difference …. ALL aided by Saul /Paul’s ‘the Word’ and resurrection bs …

I studied your BS in order to understand your (Christian) animus you Judaism and Jews … eh?

To protect and defend the Jewish People ….

Hej, wouldn’t it make sense if you two would NOT fight each other over such very interpretable stuff? I mean, this discussion is one of the soft points which is for some other party a great reason to happily grin.We are all three on same side in this regard, I assume, each with another heritage and background indeed.

Take it easy you both and Happy New Year – no matter when you are celebrating it :-) This is not exactly what makes us so very different, there is more in common.

I don’t agree but have a Happy New Year

this disintegration is observed in much of western Europe where americanism has putrified culture (Heidegger/Evola/Dugin, etc) and coerced many EU nations to flood their cities with migrant refugees from other nations due to amerikan imperialism in ME, etc