Israeli warplanes carried out several airstrikes on two “underground structures” of the Palestinian Hamas Movement inside the Gaza Strip at the late hours of January 12.

The Israeli military said that the airstrikes were a response to a rocket launch from Gaza. The rocket reportedly landed in an Israeli settlement near the Palestinian region and caused no harm.

“We will continue operating to defend Israeli civilians,” the Israeli military said on Twitter.

The Palestinian Shehab Agency said that the Israeli airstrikes targeted the northeastern part of the Gaza Strip. The local news agency didn’t report any casualties.

The situation in Gaza may escalate in the upcoming few hours due to the current pressure on Israel’s Prime Minister, Benjamin Netanyahu, over the lack of security in the southern Israeli settlement.

Following the rocket attack today, Avigdor Lieberman, an Israeli politician and former defense minister, wrote on Twitter that “the government that turns warning sirens into a routine for the residents of the south deserves a red card.”

“The rocket reportedly landed in an Israeli settlement near the Palestinian region and caused no harm.”
Also idiot Netanyahu very pissed off about party balloon incident ! 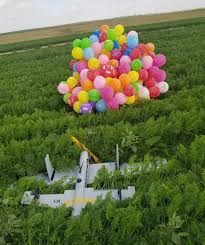 Israel… the only scum state in the Middle East.

Either Israel has spies in Gaza, or there are traitors among the Palestinians.