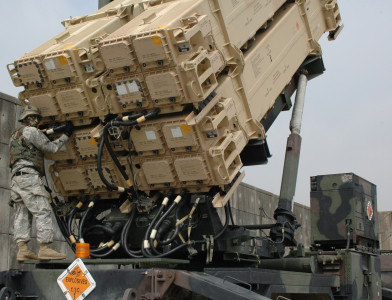 The Seoul HQ of the USFK (United States Forces Korea) announced that the US military sent additional Patriot missile systems as part of emergency operations carried out altogether with South Korea.

The new missiles are effective for intercepting enemy  warplanes (and missiles as well) at a range of up to 96 kilometers. Also, the new Patriot missiles are supposed to be rotated every six months.

Lt. Gen. Thomas Vandal, Commanding General of Eighth Army (commanding formation of the USFK) announced that after North Korea’s constant violation of the International community’s will to thwart the Asian nation development of ballistic missiles, it is absolutely necessary to “maintain effective and ready ballistic missile defenses”.

The cited missile systems came from a battery placed at the Fort Bliss Military base in Texas. The objective of the deployment of the additional assets is to reinforce the already existing PAC-2 and PAC-3 Patriot missiles currently located in the Osan Air Base.

However, the already made deployment of Patriot missile systems is not the only measure that the US military could take in response to Pyongyang’s “defiance”. Terminal High Altitude Area Defense (THAAD), an advanced anti-missile system with superior capabilities than Patriot missiles could be the next step that is currently being considered.

In response to the American measures taken altogether with South Korea, Russia and China have openly shown their disapproval to the deployment of additional weaponry claiming that it clearly depicts a threat to stability of military power in the region. Thereafter, the US and South Korea claim that the deployment of THAAD is necessary to contend a possible missile attack from North Korea, or what is worse, an imminent delivery of nuclear warheads through long-range ballistic missiles.

China and Russia believe that such deployment could actually be used to counter Beijing’s military power and also to spy Russia’s Far East.

The reinforcement of South Korea’s and USFK’S defense systems comes after Pyongyang launched a rocket carrying a satellite as part of a peaceful space exploration project last week.

UN Security Council imposed a series of sanctions over North Korea in regards to the development of rocket technology; therefore, the reactions against Pyongyang’s launch were negative in the International community.

I thought the Patriots defenses were having difficulty protecting the Saudi in Yemen. Perhaps it is primarily a symbolic gesture by those in control meant to calm the average South Korean.

I share your opinion. I would say, based on the system description, that THAAD is the tool, which could bite the rockets. Patriots are there to anger the chinese and russians, I assume.

The THAAD system has not been tested in nuclear war. Presumably EMP would be used to disrupt normal electronics . The ABM systems are highly electronic dependent . The performance of ABM systems in EMP storms is unpredictable.