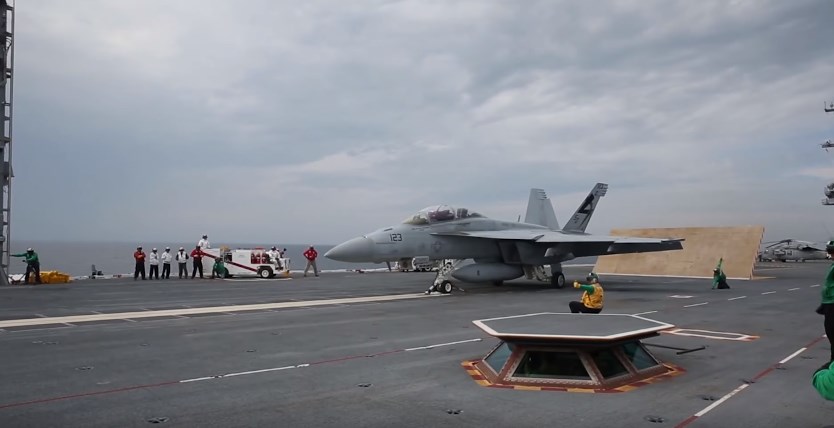 “The ship left Norfolk Friday and, off the Virginia coast, conducted the ship’s first arrested aircraft landing or “trap,” followed 87 minutes later by the the first ever catapult-shot launch according to a Friday night release from Naval Air Forces Atlantic.

Not only were the milestones the ship’s first fixed-wing flight operations at sea, it was also the first shipboard test of the two new flight deck systems, the Advanced Arresting Gear, known as AAG and Electromagnetic Aircraft Launch System, or EMALS.

Both systems had been plagued with difficulties in development. But by the end of the afternoon, the ship had accomplished four successful arrested landings and catapult shots,” Navy Times’ article reads.

“I could not be more proud of the men and women who, for the better part of the last two decades, have worked to bring these new technologies to the fleet,” Capt. Stephen Tedford, program manager, said according to the US Navy press release.

“The mission and function of EMALS remains the same as the traditional steam catapult; however, it employs entirely different technologies. It delivers necessary higher-launch energy capacity, improvements in system maintenance, increased reliability and efficiency, and more accurate end-speed control and smooth acceleration. EMALS is designed to expand the operational capability of the Navy’s future carriers to include all current and future planned carrier aircraft – from lightweight unmanned aircraft to heavy strike fighters,” the press release reads.

Let us hope for the sake of world peace that the USS Gerald Ford is as ineffective as the President it is named after :)

The vessel was named after a dirty criminal liar and scumbag.

Nothing new there then for the US :)

unfortunately. this ship is much, muxh, musch better then kuznyetsow

So in reality the only enemy combatants that the USS Ford can take on with impunity are ‘tribesmen armed with spears ‘.

maybe. but nobody saw any anti ship missile in action. the truth will we know after war. until that time i do not take this thing as true fact. only probably.

Actually we have. The Houthis have used some to good effect and their anti ship missiles are not the really up to the date ones that are produced by Russia, China, Iran and the US European allies.

Hezbollah used one from Iran in 2006 on the Israeli Navy we can see its effectiveness there in that war.

those are not american ships. saudi ships are for gamers

Israeli had one of theirs knocked out from an old Iranian ship missile know wonder they are terrified of them. Israel like the US kill those who want to stop working for them and stop inventing new technology for them, many foreign nationals end up with mysterious accidental deaths.That is what it’s like working for these Mafias Countries.

Yea, nobody saw Exocet in action.

i saw us ships in action. russian missiles never.

They built an aircraft carrier 50 years behind the times in needs a whole entire flotilla just to defend it in today’s world. The Anti ship missiles today could make it toast if it was hit by a non nuclear missile such as the Zirchon M.

Solomon with an Uh’Murikkkan cock in his mouth.. as usual….

What a beautiful ship.Im so pround of her. No one else can build that.Named after Ford tho Wtf.Should be Kennedy class.Or even care I say. McCain class

Great !,something that is insane and old and senile already with a warmongering attitude and is cancerous and decaying!

A carrier launches and recovers aircraft and this is considered to be news-worthy? pathetic…

Morons here not even try to see, why they build it. Kutznetoff is not even an aircraft carrier in the old style, its specialized.

Make me laugh, when some dwarfs here write they can hit it as well hardly able to handle bows and arrows themselves.