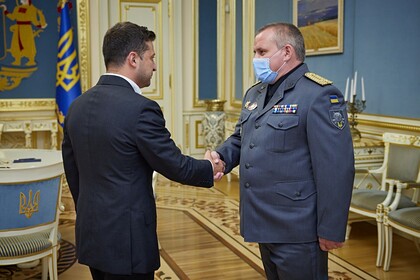 On August 25th, the Ukrainian Special Forces Commander was replaced by Grigory Galagan.

Galagan is known for his attempt, in 2014, to defect to the side of the Donetsk People’s Republic (DPR).

This was announced reported by the Telegram-channel WarGonzo, citing sources in the intelligence services of the DPR.

It is noted that Galagan himself proposed his candidacy to an influential DPR militia commander, whom he approached through his contacts in the Crimean “Alpha Group” (a branch of the Security Service of Ukraine), where he served till 2014.

There he served as a sniper until the referendum on the reunification of the peninsula with Russia, after which he left for Kiev.

The details of the transition of the new head of the elite Ukrainian special forces to the side of the DPR were supposed to be discussed at a personal meeting, which was to take place in Istanbul.

“The negotiations broke down because of the sum requested by Galagan, which he demanded as a reward. It was unreasonable,” the cited source claimed.

After the breakdown of negotiations, Galagan, who was considered one of the best snipers in the CIS in the professional community, began to hunt for high-ranking Crimean volunteers who fought in Eastern Ukraine, the reported continued.

Ukrainian Volodymyr Zelensky made Galagan commander of the Special Operations Forces of the Armed Forces of Ukraine on August 25th. Prior to appointing Galagan, Zelensky dismissed Igor Lunev from this position.

The Ukrainian leader explained this appointment by a change in the tasks of the Joint Forces Operation (JFO) in the context of the ceasefire in Eastern Ukraine.

“There will be more provocations from pro-Russian militants, therefore both the command and the personnel of the Special Operations Forces must work more to prevent them and prevent them,” Zelensky explained.

Zelensky also drew attention to the need to introduce more aggressive measures to counter emerging challenges and adequately respond to provocative steps by the enemy.

Among the measures that the new special forces commander still has to take, Zelensky called the continued development of all components of the Special Operations Forces.

As such, the new more-aggressive posture makes no sense at all in view of the ceasefire, but it is showing far Kiev plans to adhere to it.

After all, approximately a month passed and Zelensky already claims that “provocations” are expected from the DPR and LPR, and at the same time more aggressive actions would need to be carried out by Kiev, “in response.” Apparently, the potential defector was the best candidate among those that Ukraine has to appoint for such a responsible position in these conditions.

WarGonzo? Fake news dude that gets beaten up by everybody in every place he goes to? He sat on a bottle in Minsk detention for too long, to report real stories. Southfront, you can do better than that guy, lets get serious.

Truth hurts try to handle it :)

Truth doesn’t hurt as much as the bottle:))) Try it sometime when u r in Minsk. Im going to Tomsk for cup of tea, they said its perfectly safe, want to join me?:))))

i sure will, because only idiots beleive navalny was poisened.

I heard siberia ia gorgeous in september , im in!!! Ill drink whatever, ive drunk under the table: guys from france, italians, americans, germans and canadians.

Ill outdrink you too ;)

I love party people. something tells me we will get along extremely well. if fate ever brings us together, i will have drinks with you my friend.

Ask Zelenclonwsky to join you in Kiev, there you both can drink Hunter Biden’s cocKa-cola along with cookies :D

btw only braindead imbeciles like you believe that worthless CIA terrorist Navalny, Natolny, Analny (whatever his bitch name is) was “poisoned” lol. military grade nerve agent could easily kill 10000 people, if he even touched that shit he would have been dead and rotten (just like your brain). Laughable reality show for morons in CIA production.

WarGonzo is freelance jurno. His reports from DPR/LPR were awesome! Don’t think Belorussian police was cruel with him. BTW he was the first person who recognized DPR veterans in the recent scandal with Russian mercenaries detention in Minsk. Why you say he is fake news dude. Can you present any facts?

I am not a journalist, i don’t have to present facts. He is the journalist, its his job. Read the article, find the original source, search for facts. it will be frustrating journey though, be careful

And who the fuck made you the arbiter of truth?

If you want to do the thought police act here, i and the 1000’s of other users will gladly tell you to go fuckyourself.

Also even a broken clock is wrong twice a day.

broken clock is *right twice a day. I agree with you in regards to the argumentum ad hominem. but he has no credible sources either. all his got is his conspiracy imagination. and im not going to take that guy’s words for it

He is a bit chubby to be in special forces… Too bad, maybe next time. Interestingly mostly ukrops fleeing to the east not vice versa… Glorious banderistan…

He was famous commander of even more famous unit “Raging Dumplings”

Known as the ‘ Ukranian Whale Force’.

His call sign was ‘Pot Noodle’ I think, owing to his pot belly.

ı love ukraine but their place and perspective even the nature orders them to co-operate with russia…how can they believe to eu and usa..you already have common history ,russia supply you cheap gas,you can go and work at russia any time,so much marriages…fatal mistake..

That’s the kind of democracy that anglozion and the Washington ass-lickers hawks spread across the world Unfortunately for the insane ambitions of these cowards killers, the world is waking up, soon the Ukrainians early will also arrive and then the Nazis will have to migrate to Poland or the Baltic countries where their simile suckers live