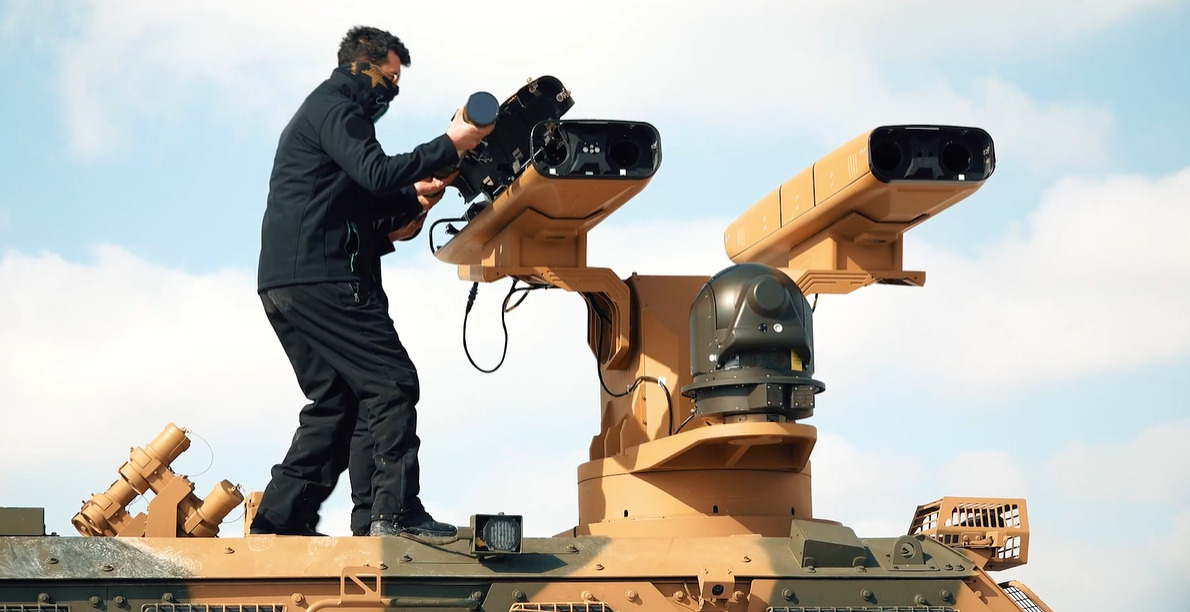 Screen grab from the ROKETSAN video.

On Twitter, SSB director Ismail Demir revealed that the new system hit a moving aerial target at the maximum range and altitude with pinpoint accuracy during the test.

Demir noted that the new system, which was developed by Turkey’s leading military contractor ROKETSAN, can be integrated into land, air and naval platforms.

A video of the test shows Sungur, which was mounted on a Vuran armored vehicle, firing one of its four anti-aircraft missiles at a moving target. The SHORAD used its infrared optical system to track the target.

Sungur’s missiles, which are guided by infrared homing, have a range of over 6 km, with some sources calming that the range is up to 8 km.

In July of 2020, it was announced that the Sungur SHORAD was ready to enter service with the Turkish Armed Forces. However, this is yet to happen. A very similar system, the ALTIGNAN, is already in service with Turkish forces.

Being nato member doesnt mean that we must use all usa military stuff Ali..Especially when you need munition,uav,helicopter or gps access in case of conflict and they say ”Congress doesnt allow”.

I agree. I also agree in best to the price. But there also are problems by that attitude and thats the coordination among Nato Countries in conflicts.

I also see Turks has met the opposit about the S400. Its very visible that we were more or less forced to choose the F35 here even it – as I and several others see it – would make more sense to produce the most upgraded F16 and drones.

The F16 still is a very good jet and we should save a lot already having almost all facilities even to the newest version. If we are and were blamed they are just below the Russian ones, we could just add 10% more then now.

So I wish Turks good production in those matters. It makes sense.

first of all to make you a little wiser than before the quantum telecommunication that you were mocking claiming that its fantasy and which you will not mock in future https://www.youtube.com/watch?v=hCOB-VLyBJ4

come on animal ı am already done with you..ı told you dozen of times:The only thing you will hear from me is mocking to your adress.Why? because simply you are animal without dignity.ı am not reading your posts as well.. and ı will never ever take you serious.İrani who is living in twillight zone 🤣.

I blocked this farbat long ago.

AHAHAHA..İrani flag is shit just like its sneaky,racist people…animal.. usa,uk Turkey every country is project state for you right? you are doomed usa will slowly shrink iran and hopefully İran will be dissolved into 4 pieces.

I wonder how you are able to reply to this trash. He doesn’t even know what he’s talking about in most cases.

correct..its time to block him.

It was Turkey who wanted to buy F35s and Patriot SAM’s, they said no and you bought Russian S400. Russia is not going to sell you any more military hardware…..so you have to become creative, innovative creative.

I dont hear that. I hear they think they are big enopugh to replace foreigners stuff with own productions – even they partly are copies.

The American dominance was made, when Turks by USA initiative joined Nato. Here they was donated for billions of American equipment as well as they bought a lot from there.

So it makes sense the % will go down in the modernisation of the Turkish armed forces.

You bias things. The USA stuff in Turkey mainly is old .

The avenger at least deployed 8 missiles, your platform deploys 4, the missile characteristics are similar to a Stinger,……supposedly effective against a slow flying drone. Pantsir has 12 missiles with far more capable missiles.

“” Sungur’s missiles, which are guided by infrared homing, have a range of over 6 km, with some sources calming that the range is up to 8 km.””

Infrared homing aka heat seekers can be neutralized by flares.

This is manpads(new generation) better than FIM-92B & FIM-92C Stinger and we produced it to decrease dependency to Usa.We had to start it from somewhere.

Unimpressive. Houthis have a DIY system with longer range. https://www.thedrive.com/the-war-zone/19513/aircraft-attacked-over-yemen-with-r-27-air-to-air-missile-modified-into-a-sam

Next time You commen short Turkish range is for comitting suicide or something. Houtis dont produce anything.

Like turkish drones, only the color is turkish made ^^

Thats highly incorrect. Turks produce most of it even it probatly is correct they still cant produce the most advanced parts.

You seemes to forget, they by their productions try to make a much cheeper military system and no competing. So You are wrong in their intensions.

Its about best to the price.