Russian President Vladimir Putin met with his Turkish and Iranian counterparts in Sochi on November 22 in first ever three-side summit dedicated to regulating the situation in Syria.

Putin opened the summit by saying that the full fledged action against the terrorist threat comes to a close, thanks to the efforts of Russia, Iran and Turkey, that stopped Syria from dissolution.

“The full fledged assault against terrorist groups in Syria are coming to an end,” said Putin. “The efforts of Russia, Iran and Turkey managed to avoid the collapse of Syria, its capture by international terrorist forces, and avoid the humanitarian catastrophe.”

Russian leader stated that a truly decisive strike was dealt to the militants and that “a real chance to put an end to a long civil war appeared.”

“The Syrian people will have to decide its own future and coordinate the principles of their state structure. It goes without saying that the reformation process will be a tough one, will require compromises from all sides, including the Syrian government. I hope Russia, Iran and Turkey will do all in their power to make this a productive process,” Russian leader said.

He also stated that the success of the future transformations will depend heavily on solving social and economic troubles in Syria, as in restoring the economy, agriculture, infrastructure, health care and education. According to Putin, humanitarian aspect plays an equally important part, including helping the populace, demining the liberated territories and helping the refugees return home. Thousands of refugees already returned home, after the de-escalation zones were created, Putin noted.

Speaking of an integrated Syria restoration plan, the Russian leader said that Russia, Turkey and Iran should concentrate stabilizing the long-form situation in Syria, and on post-war restoration.

“It’s clear that we approached a new stage, allowing us to kickstart a real political regulation process,” said Putin. “I think our efforts should be focused on stabilizing the long-form situation in Syria, with the political process taking centerstage and finalizing these negotiations within the Geneva process and helping the post-war restoration in Syria.”

The meeting was one of the most important events to find a diplomatic solution of the Syrian crisis after the sides had failed to achieve any progress within the Geneva format.

If someone thinks a “triple alliance” of Russia, Turkey and Iran will change the world, then those people are not thinking straight.

One almost real world power, coming together with two second rate regional powers, does not constitute a world changing happening. Certainly not as there are many internal tensions between those three.

On the other hand, it is a signal for the surrounding regions, incl Europe, to start investing heavily in new arms and army expansian.

It may not change the world, but will certainly change the region. How about that…

ONE city, ONE province, ONE country at a time, ONE by ONE.

The countries who invested heavily in arms and expansion don’t need an excuse. It’s their nature but this alliance may be sobering surprise for them that it may not work anymore. Their nasty plans defeated by the countries with the least military budget per capita.

Yes, this is possible….but having turkey as a allied, I do not know.

Western countries have a very small defense budgets (exc. US, UK), way below the three of this unholy alliance.

I can wake up an asleep human, can’t do anything for someone who pretends to sleep.

This table is just for the announced military budgets of some of the countries. It doesn’t say anything for the secret money spent on Salafi terror groups and PKK land-grabbers: 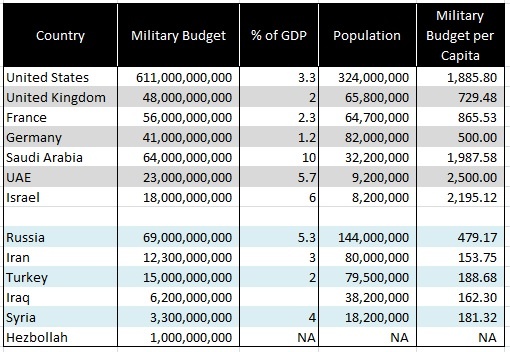 The numbers are according to an open source, Wikipedia
The numbers for Iraq and Syria is not so fresh as the others.

I feel sorry for you. From lying and twisting the truth you reduced to trolling, plain and simple.
And I’m not gay, if that’s not a typo. you sorry excuse of a human being.

Do You think the war to change the world will be with guns?

Nobody can predict that imo. But as the saying goes, want peace, prepare for war. As the EU countries have neglected there defense, it is beyond time for them to restart preparing for (defensive) war.

There he is the Zionist ,anglo,American,clown thinking in arms to change the worldview.

There is no Europe. Only European states. And most of them are finished. As for changing the world..Hmm The realignment of power from West to East is changing the World as we speak, in fact it has already changed it in so many fundamental ways if we only compare today with a decade ago..

The EU is Europe except for Russia and Ukraine and a few neutral pro EU countries.

The EU is a supranational entity that is acting against the European civilization and in favor of globalised interests. Its very existence is an affront to European culture.

Feel shaky? What this alliance means for your beloved Kurdish land grabbers?

to get fucked again imho

What is with you gu(a)ys? Are all you ass-adophyles queers, oversexed or not getting any? All jerkers imo.

I think you are not getting any , that’s why you “guys” kee on pushing in order to fill up your own rectum.

Fuck Nato , netherlands and you. Especially you and netherlands. You are both a bunch of vacuous “do -gooders” who have filled your country and europe with headchopper invaders whilst preaching you are progressive.

Both of you are in fact naive and “useful idiots ” being used by u’merikka and rothschilland to promote their interests , to the detriment and expense of the rest of Europe and the world.

I still think you are a sephardic jew and a queer one at that.

So you are still upset that “hero” zionatoyanquistan did not unseat and anally rape “tyrant” Assad?

Boo hoo! I am so sorry for you.

Now let me challenge you to tell us which combination o

Not regional changing. IF they form a real alliance, doubtful imo, this will have an impact on the region, certainly. Not on the world though.

Iran and Russia saved Syria. The US, SA and Israël almost succeeded in their evil plans. Though the beautifull ancient Syria is devistated and turned into a pile of rubble and many people lost their lives, the proud people of Syria are saved from the barbaric retards who almost dragged Syria back into the dark ages. Thank u Russia! Thank u Iran / Hezollah! The world owe u!

If I were Putin or Rouhani I’d check for my wallet the moment I’d get even near that slimeball Erdogan.

Why would Putin say that the conflict in Syria is a ‘civil war’ when he knows that it is a proxy war operated by external satates namely the US, UK and Saudi with Israel and France lurking in the background?

What do you think would happen if he did say that it was a proxy war? He is playing political chess – the conflict in Syria was labeled a “civil war” to suit whoever was behind this so he went going along. Putin alone cannot go against the US, UK, KSA, France, Israel and all the rest of the cabal. But his actions did expose the conflict for what it really was – regime change to install a puppet to do the master’s will.

Translation probably. But if he used it it was purely diplomatic usage. Earlier he refers to the assault on Syria by international terrorist forces.

Because he is also politician and knows that Turkey is a terrorists supporter (member of NATO) and tries to get along well with Turkey.

Oh come on. Don’t count on turkey. They will surely flip again once they see opportunity

I don’t think so. This is for real and just watch Turkey may leave Nato as there are too many issues with US right now from Kurds issue to the coup that almost cost Erdogan his life saved by Putin.

This trio actually is very powerful no force in ME can counter.

This bringing Turkey to this alliance is Putin’s master stroke.

Now his ME flank is well covered

Yeah things are bit different now, but someone in the US recently said that the relation between turkey and US is like marriage.

Sad but he is true. If US says Turkey lets work together, I am pretty sure that Turkey will immediately dump the Russians. Mark my word.

“The full fledged assault against terrorist groups in Syria are coming to an end,” said Putin. “The efforts of Russia, Iran and Turkey managed to avoid the collapse of Syria, its capture by international terrorist forces, and avoid the humanitarian catastrophe.”

How can he include Turkey in that sentence!?!?!?

I’d really like to know what goes through Putin’s mind. By not mentioning that Erdogan backed (not sure that should be past tense) the jihadis, and actually praising him for fighting them…is this Putin’s way of backing him into a corner where he has to succumb?

Putin knows what he is doing. He is playing smart politics pulling Erdogan further into the righteous camp of Iran, Hezbollah and Russia. I wish him success!

I think you’re right. Putin is clearly far more intelligent than the fools the West has been running out there forever.

Having USA behind Turkey, it is difficult to trust Turkey at all.

You are right and that is why Putin is trying to pull the Turks away from the destructive and satanic U$ and Nato. Putin is fighting for all of us and I wish him success!

I’m still on the fence on this, is Putin a controlled opposition?

The 800 pound gorilla in the room is standing up Israelistan secession in the SDF areas. If the Turks stay on board with maintaining Syrian territorial integrity, that will be a much more difficult task for the Jew baby rapers to pull off.

I do not trust Turkey (NATO member, and terrorists supporter).