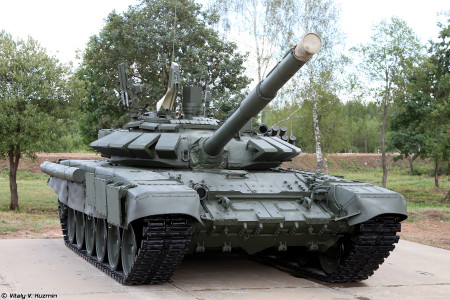 Several news outlets reported that the Russian Ministry of Defense awarded a contract to modernize 154 T-72B-series tanks into “T-72B3 with additional protection”. No photos or specifications of the new vehicle have been published, but a number of analysts have voiced the opinion that the latest round of modernization will bring up the vehicles to the T-72B3 “Tank Biathlon” standard, sometimes referred to as T-72B3M or T-72B4. The Tank Biathlon vehicles differ from other T-72B3s by having an independent crew commander tank thermal sight (visible on top of the turret right between the crew hatches) which allows the vehicle to operate in a “hunter-killer” mode where the vehicle commander is searching for the next target while the gunner is engaging the current one, which considerably increases the speed of engagement and takes advantage of the T-72B3s improved autoloader’s higher rate of fire. Thus modified T-72B3s apparently demonstrated a sufficient performance advantage over regular T-72B3s to warrant making the experimental modernization into a standard service one.

The vehicles will also have improved protection, which will most likely be based on the experiences from the use of T-72 tanks in Ukraine and Syria, and T-90 tanks in Syria.

It is not yet known which units will receive the new vehicles. 154 tanks is enough to equip 5 tank battalions. These battalions could be assigned to individual motorized rifle and tank brigades, or they could fully equip one of the divisions that are in the process of being reconstituted and whose tables of organization have not yet been announced.

The news of continuing T-72 enhancements also suggests that the Russian military has opted not to modernize T-90 tanks to the T-90SM standard, even though such an upgrade was suggested at the Armiya-2015 exhibition. At any rate, no T-90 modernization contracts have been issued yet.