A new report has shade light on the losses of Armenian and Azerbaijani forces in the ongoing battle in the dispute region of Nagorno-Karabakh.

The report, which was released by the Oryx Blog on October 25, provides a detailed summary of the material losses both sides sustained since the outbreak of the battle on September 27.

According to the report, Armenian forces sustained the following losses:

The losses of Azerbaijani forces:

It is important to note that the Oryx blog is known for supporting Turkish-backed Syrian rebels as well as for being aligned with the Azerbaijani-Turkish media campaign in its efforts to cover the war in the Nagorno-Karabakh region. The blog also has links to Bellingcat, which reflects its political orientation.

The numbers provided by the blog were likely collected from videos and photos coming from the conflict zone. While this provides an insight on the situation, it is nearly impossible to verify these numbers or the media material which were collected from.

Lost Armour a credible military statics site, which is monitoring the ongoing conflict in Nagorno-Karabakh, provided different date from that given by Oryx. The website lists verified losses only. It does not relay on repeated footage or any evidence that has not been checked in details yet.

Regardless of the data provided by Oryx and Lost Armour, there is no doubt that Armenian forces sustained more than double the Azerbaijani losses in the ongoing battle.

The superior fire power and more advanced weapons of Azerbaijani forces have inflicted serious losses on Armenian troops. As a result, Azerbaijani forces were able to make significant advance in Nagorno-Karabakh, mainly in the region’s southeastern part.

land gains say it all…armenian forces are in deep trouble but they still think that they will win this war by begging everyone for help…new footage of bayraktar strikes…
https://twitter.com/ConflictTR/status/1320427974362103811

updated map and footage from kubatlı which is captured today… 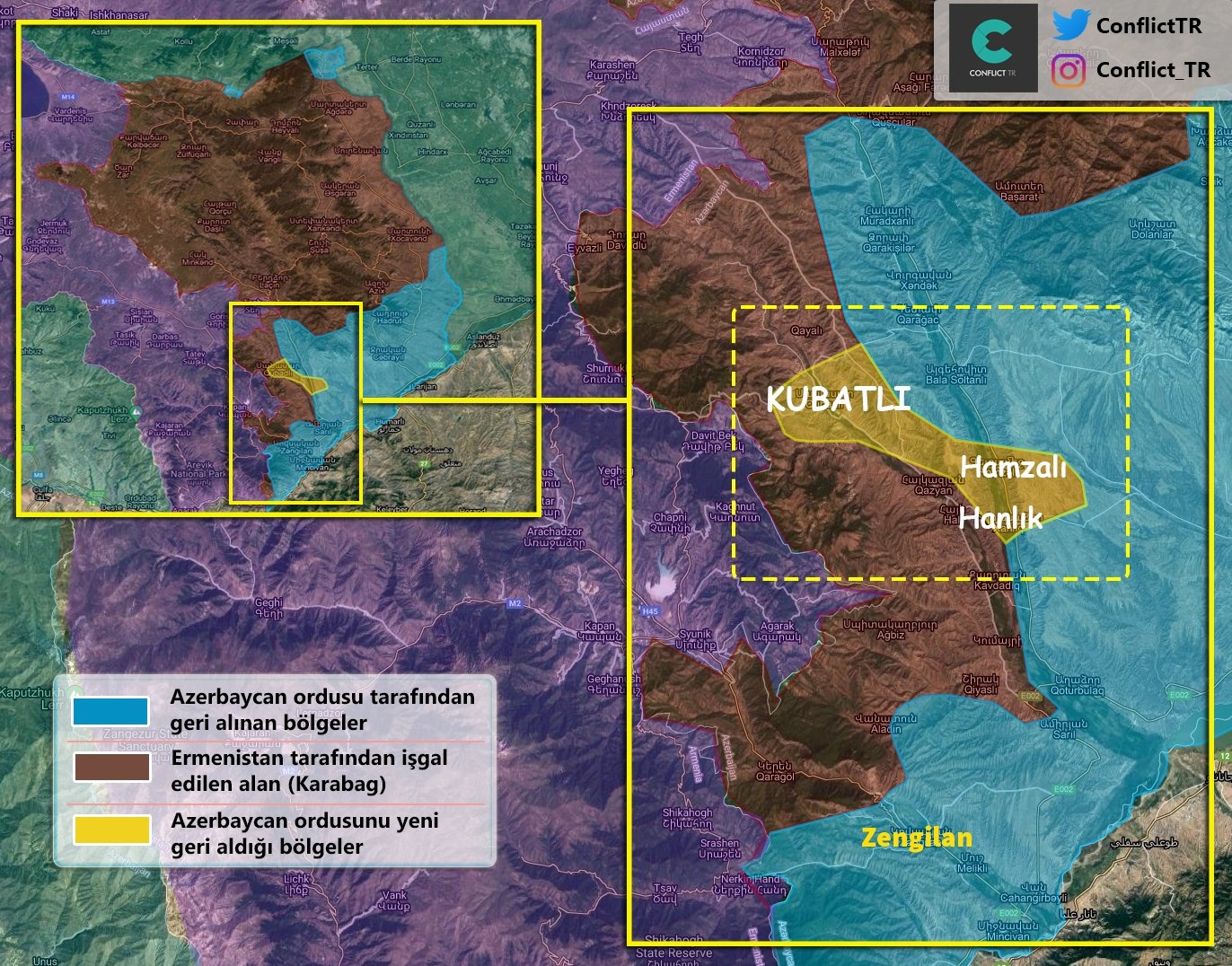 Armenian pigs must lose. It is the will of God of Moses.

Goodbye my lover, goodbye my friend. 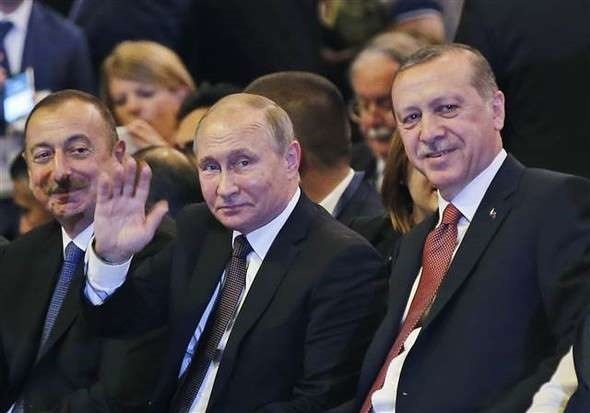 Brother Aliyev is a winner. May he be blessed with victory.

Oryx Blog has been very reliable. We can see that from the Syrian civil war. It was relatively unbiased.

Lost Armour is such a joke. It said Armenian lost only 13 battle tanks. So funny.

i think this page is deleted…replaced with this one
https://southfront.org/azerbaijani-military-used-israeli-non-line-of-sight-missiles-against-armenian-forces-videos/

All winners must buy harop and chosen weapons.

There is no way that Azerbaijan would agree to Russian peacekeeping force inside N-K. Russians were known to be assisting Artskins during the N-K war from 1990-1994. It has a military pack with Armenia and has been supplying weapons to Armenia on “credit”.

Azerbaijan offense will continue until Artskins agree to withdraw from N-K.

Turkish war propaganda (aka Oryx) works much better than turkish army. We know very well how it worked in Syria for 5 years, for example.
So, even if Lost Armour is not 100% precise (as it couldn’t be), still the numbers they show look realistic. Turkey, arab terrorists and Azerbaijan alliance, with their advanced weaponry at their disposal, didn’t achieve too much in Artsakh and this is quite normal if you look at the map. The main advance of the terrorist alliance is on South, outside the high mountains area.
We’ll see how the war will end, but I doubt Armenians said their last word.
And Russia, well, Turkey might find out soon that they crossed a big line.

We have seen Turkish propagande when they told that SAA was destroyed as consecuence of one week of Turkish attacks in Idlib…but few days after they launched an offensive and retake Saraqib, the M5 highway and 5 village more!…AZ launched the NK offensive in east and north…but failed!…then they moved troops along Irani border and advance in flat terrain…but they cannot expel thousands of troops and even less infantery soldiers which have sniper rifles, ATGM, Manpads ( to avoid the use of helicopters), they know the terrain, they have shelters in Mountains, the fog is usual in that area…they can plant mines and IED, can use Smerch rockets vs military camps inside NK…AZ only can retake NK with talks but not with military force!…they need for such task bomber jets with heavy bombs and Attack& Transport helicopters beside hundreds of Tanks.

That’s why turks and Aliev can decide that they took enough land and stop offensive now. Erdogan want to have straight corridor from Turkey and Nahichevan to Baku. It could be the goal of negotiations. Though Erdogan’s extravagance have no limits, so it’s hard to make any conclusions. He could even order to attack Armenia to grab the corridor, but Iran is also against it. They are concentrating troops near border and could response decisively at any threat. We could help to iranian infantry with air-support. No one want to see turkish military camps in AZ. It’s also fair for zionists with their close ties with AZ in attempts to build own bases on Caucasus close to Iran.

This is just a battle let’s see how the war will end! At the beginning the jihadi muslim goat lovers appeared to win in Syria and now 70% of the muslim SCUM is partying with muhhamad the paedophile in Hell! :) Let’s see THE END!!!

I dont mean to take the wind outta yer sails, but Russia’s probably not gonna come and save the day like they did in Syria…

Russia will do no such thing against the chosen people.

You blasphemous Orthodox criminal, the Khazarian brotherhood will win.

Stupid trolling of jews. I mean you are not one of them.

According to this, the N-K army has 316 tanks, Armenia proper has around 160…

I also suspect the high number of damaged, but not destroyed, tanks reflects the large number of loitering drone strikes. Those drones carry only small explosives and probably aren’t actually destroying much heavy armour. Not that one can tell, since the camera (obviously) cuts out upon impact.

correct……most of those 3 kg L/M warhead impacts won’t destroy a T-72 or 64……Lot of over claiming by azeri.

Yes, and also advanced drone warfare is something the Armenians haven’t adjusted to yet. Soon there’ll be drone wrecks everywhere, mark my words.

It should *shed* light rather than *shade* light :D

Unknown sources again. Putin said that both sides lost ~2000 men each, total casualties are close to 5000 people (with civilians may be). Loses are equal.

Destroyed equipment stats turn around very quickly when certain phases are reached. Look at the Houthi, destroying endless amounts of Saudi equipment. Armenians will soon be doing the same. Starting wars is easy, finishing them hard. Azeri pockets are not as deep as the Saudis.

Stfu …..don’t forget what the Armenians did to Turks and Azeris in the first NK war in the 1990s! Even the Afghans ran from the Armenians! Know ur place as cowards you turkish Muslim rejects!