The local Turkish upgrade package added a completely modern armour suit for the German-made MBT, which was first introduced in the late 70s. The Turkish Armed Forces operate more than 350 tanks of the 2A4 type.

The photos show that the front of the Leopard tank was equipped with an add-on modular armour. However, the sides of the tank’s turret and body were covered with explosive reactive armour (ERA) bricks similar in design to the Soviet-made Kontakt-1. In the back of the tank, a simple slat armour was installed. According to SavunmaSanayiST, the new armour suit should protect the tank from high-explosive anti-tank (HEAT) warheads, which can be found in most anti-tank guided missiles (ATGMs) and some rocket-propelled grenades, like the Soviet-made RPG-29.

Between 2016 and 2017, the Turkish military lost several leopard 2A4 in the course of Operation Euphrates Shield against ISIS in the northern countryside of Syria’s Aleppo. Most of these tanks were destroyed with ATGMs.

SavunmaSanayiST said that the new upgrade package may also include the Pulat active protection system (APS) and the SARP UKSS remote-controlled weapon station (RCWS). Both systems are locally made in Turkey by ASELSAN.

It remains unclear if the Turkish military is planning to equip all of its Leopard 2A4 with this new upgrade package, or if it is only meant as a temporary solution for possible future operations in northern Syria.

To all little internetkids out there, slat armour works: 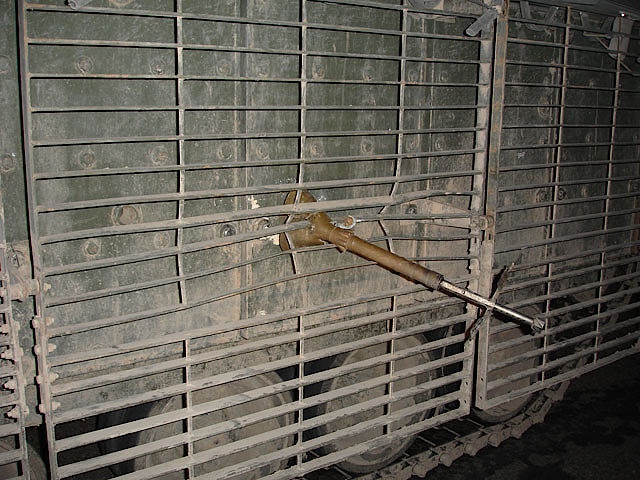 It does work but here (Turkish 2A4 images) we see something I would call “desperate afterthought”.

Correct, especially when the Photo i posted was taken back in 2006 in Basrah, Iraq, from what i was told.

Some armies refuses to learn from other armies and their mistakes and losses.

Indeed, starting weight without add-ons is 62 tonnes.
In pix looks they they are giving it a test to see if it gets mired.
Wonder if it made it out of the mud ?

I agree. This upgraded Leopard 2 is starting to make a Wehrmacht King Tiger look like a medium tank in comparison.

I feel sorry for the Germans, they designed a perfectly good tank, only to have its reputation trashed by monkeys with tank doctrines so poor it made those of the French and British armies during the Battle of France look good in comparison. And I say monkeys not because the operators were Turkish, I know plenty of fine good Turks, but because monkeys could not have done a worse job then these Turkish troops did.

Does it look a bit errr….cagy?

I think they seen what the syrians did improvising to protect their tanks and copy them. The question can be only answered to the field, what they achieved with what they did.

If slat armour is part of the initial design and construction of the tank, it will have an integrated look and look clumsy and as an afterthought.
I can understand reactive armour bricks being used on the sides and the turret, however, seeing slat armour around the turret makes the tank look like an afterthought.
I remember when ISIS killed some of these tanks due to the fact they we’re left in the open without the attendance of the crew, ISIS ATGM operators knew the weak spot of the tank and took advantage of it.
Tank crews need to be more diligent and responsible in positioning the tank after working hours.

Turks lost 10 of those tanks just in matter of few days.

Where do you get your figures.ivan

Because TAF sent those tanks into field and lined them up with no infantry support or air cover – ATGM teams are very hard to spot from tanks – infantry scout for and disrupt them and aircraft can locate and destroy them.

That tank is 100% stationary in the ditch. Will they have the power and grip to tow it out? Lol.

The upgrade improves turret survivablity with double layer ERA sandwich and adds a spaced composite armor to the front similar to the one in merkava mk4’s turret sides.Cages seem to be placed on aresas those will take hits from cheaper RPGs often instead of ATGMs. Mobility isnt affected as much despite that. I call it neat