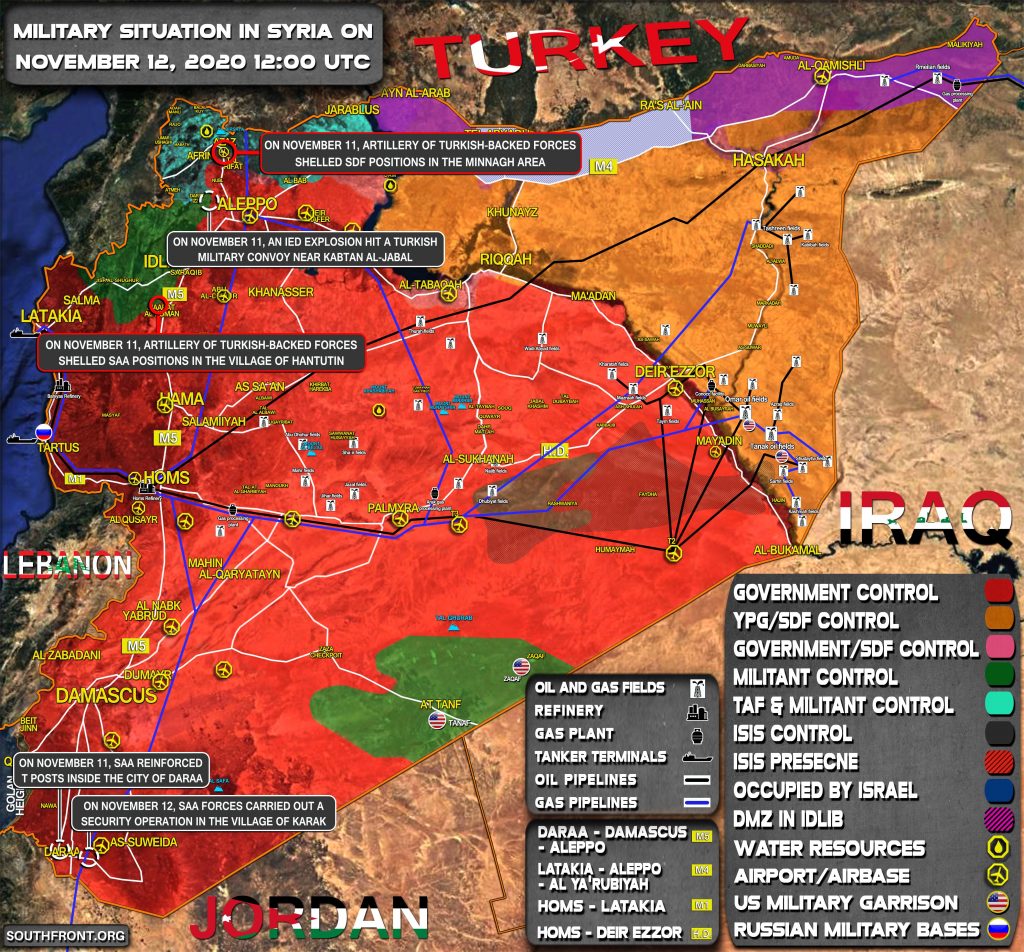 With Esper out the door, Trump’s newly in office acting Secretary of Defense is already making waves given who he’s just brought on board.

The new acting Pentagon chief, Christopher Miller, has just brought on as his senior adviser Ret. Army Col. Douglas Macgregor. Crucially Macgregor is on record as wanting American troops out of Syria immediately (gasp, the horror!), and further wants a rapid draw down in Afghanistan as well as in places like the Korean Peninsula.

“President Trump’s newly installed acting Pentagon chief is bringing on a senior adviser in a sign the administration wants to accelerate the withdrawal of U.S. troops from the Middle East before the end of his presidency in January, three people familiar with the move told Axios,” Jonathan Swan writes.

It appears Trump has finally and much belatedly put someone at the helm whose own views reflect those of the 2016 Trump campaign trail. He had been the first Republican nominee in history to lambast Bush’s Iraq War as a huge “disaster” while running on a ‘bring the troops home’ non-interventionist message.

Of course critics then and now have mischaracterized the president as “isolationist” – which has long become a negative slur in establishment foreign policy circles.

Currently it’s believed there’s anywhere from 800 to possibly up to 2,000 US personnel in northeast Syria, where according to past Trump statements they are there to “secure the oil” and ensure the permanent defeat of ISIS. Increasingly they’ve been bumping up against both Russian and Syrian Army patrols in a mission that doesn’t seem to have a defined end goal or exit strategy.

Macgregor has also said the U.S. needs to pull its troops out of Syria immediately and that America had no national interest there. https://t.co/grODh5w3aN

Here’s how Axios presented the supposedly “worrisome” and “divisive” views of Macgregor:

In a 2019 interview with Fox’s Tucker Carlson, Macgregor said he would advise the president to get out of Afghanistan “as soon as possible,” including removing the U.S. embassy from Kabul, and that talking to the Taliban was unnecessary.

Already Biden’s transition team is strongly signaling it would reverse course on some Trump draw downs, most notably the reduction of about 12,000 US soldiers from Germany.

Meanwhile The Intercept published a story on Wednesday citing an unnamed administration official who said the latest Pentagon shake-up was preparation for significant troop draw downs across various hotspots.

Personnel changes at the Pentagon, an official told The Intercept, would help clear the way for a more loyal apparatus to carry out Trump’s goals. https://t.co/wNbRPI04Bn

“The president is taking back control of DoD. It’s a rebirth of foreign policy. This is Trump foreign policy,” the official said.

Lee Fang at The Intercept underscored that “The personnel changes, the official claimed, would help clear the way for a more loyal Pentagon apparatus to carry out Trump’s goals, including the last-minute withdrawal of troops from foreign conflicts.”

Maybe Donny is paying Bibi back for the stab in the back.

If trump is to be a true world class leader,ought revoke the evils the enemy (being neo-democrats) did to him,thus reassert whos top dog,now or never or else it be like tail between the legs to biden?

Thats no advicer. They could hire me to half of the price and save taxpayers money:)

I’ll believe it when see it,our government knows how to enter war by any means but getting out is not something they good or should i say the desire to leave is never there.

This is like when you are running late to a meeting for an hour (cause you were too slow and lazy to move quicker) but then you chose to run the last 1% of the road to make it look like you were really trying. :P

At least he did it AFTER the election. It gives Trump a little credit. Remember hot air Obama promised to close Guantanamo all the way during 8 years…………………..LOL.

This will be interesting! :D

Don’t believe anything of this, JewishElites control Trump not the other way around,

The anti LGBTQI Trump administration has been against US military intervention in foreign countries from the very start of their administration. I used to think Trump was nothing but a dickhead, I’d seen him on TV a few times and disliked him intensely, so he was the last person I thought capable of running America, and to be honest at the start I didn’t know who would be worse, Trump or Hillary/Killary, but then I started watching his campaign statements, and also watching old footage describing some of his previous political views, and to my amazement he was saying everything I wanted to hear.

He wanted the US to stop meddling in other countries political affairs, he wanted to pull US troops out of Syria, Afghanistan and Iraq, he wanted to stop the LGBTQI movements influence on the US political social agenda, he said Russia was no longer a military threat to the US and the US should instead concentrate on the economic threat from China, bye bye NATO, he also said the US should start looking after their own citizens instead of pandering to this new globalization shit that seems to be taking over most nations around the world [more LGBTQI social pressure], he wanted American industry and primary production boosted and foreign imports reduced,

What’s not to like, I no longer cared he came across like a buffon, policy is what really matters, personality means nothing, Trump had the policies I liked and if I was a US citizen I would’ve voted for him both times he ran for presidency. But now the warmonger LGBTQI democrats are in power again [maybe], we’ll all get to see the difference between Trumps policy and the new presidents policies, just start adding up how many people die from now on. Hopefully Trump can prove there was political fraud and interference in the last election and upturn the results, I don’t want to see him go, I’ve seen less people around the world die during his presidency than I have for 56 years.

When I first heard him say “Assad can stay in power”, and “I want to pull US troops out of Syria”, I knew he was the right man for the job. And yes I do know his policies towards Palestine, Iran and Israel aren’t the policies most of us would agree to [me included], but he did sack John Bolton just a few weeks before the Israeli elections, so I’m pretty sure he’s not really Zionist puppet. And he did offer to reset all political/economic/military policies towards Iran if they acceded to his demands, so he at least tried to negotiate a new political solution even if it was unfair and didn’t work. He’s made a few bad decisions during his presidency that’s for sure, but sacking Bolton just before the Israeli election wasn’t one of them, that was an excellent decision, and it proved to me at least, he’s not the Zionist puppet everyone else seems to think he is, he’s actually a peace dove that can knock the warhawks out of the sky every single time, the Zionist warhawks, the democratic warhawks, and the LGBTQI warhawks. Trump the peace dove swooped down and knocked every single warhawk out of the skies, he ripped them to pieces and then ate them alive, which is something every single peace dove should do, as counterintuitive as it might sound, as well as repulsive. If he’s still fit in 4 years time the US will get another chance to end the endless wars and concentrate on their own productivity.

Trump is better than anyone on the lgbt side can come up with.

I and Bolton have pointed out for decades for the President the importance of leverage in the hearth city Manbij of the Heartland. He who controls Manbij controls the world, and I and Bolton we control it. Trump must understand we cant give up yet before we have put Russia in place and showed Putin he must behave! Manbij IS the difference! It took time but we can do it!

Hopefully Trumps is not pulling out troops to prepare for attacking Iran before leaving office, from Bibi last order.

Or he may be gathering some mileage for his 2024 election by fulfilling his remaining election promise like ending all wars. That will be great.

Hope he can truly pull out all troops from Syria, Iraq, Afgh, Korea, Jp and Europe. Shut down all 800 US overseas military bases. Remove all US sanctions on China, Russia, Iran, NK, Venezuela, Cuba, Syria, Iraq, etc.

Declassified as many US secrets like JFK, 911, etc. Pardon Assange & Snowden.

Order Izreal to return all stolen lands to Palestinian, move entire Israel to Alaska to set up as new states. Make whole world jews moved to new Israel in Alaska.

Now senile Biden will be shocked by all these stunts into concede.

For all these, Trumps will be remembered as greatest US Prez ever in history, worthy of Nobel peace prize for next whole decade. And he will be assured to win next 2024 election if he run again.