Today, new unprecedented pressure measures were taken against SouthFront, apparently from the official structures of the United States and NATO countries.

In particular, some European and U.S. providers blocked the possibility of sending letters to our mail server. Previously, they labeled emails from SF as spam. We were informed about these measures by our numerous readers.

Moreover, today SouthFront received direct threats demanding to cease its activities without explanation. These threats come both publicly from some global corporations and from employees of the US and NATO special services who are not even trying to be really anonymous.

Our ill wishers have taken a number of other aggressive actions, which we will not write about yet, since we are effectively countering them at the moment.

The other day we received a letter from a high-ranking U.S. official in the administration of the US president, who, oddly enough, is our fan and long-time reader. In the letter, the person once again warned us that every word in the articles published on SF is subject to a separate assessment by special units of the CIA and authorized employees of the US State Department.

As our dear readers may know, SouthFront has been facing excessive censorship over the past years.

Our pages, accounts and even links to SF were blocked almost everywhere: on Facebook, YouTube, Twitter, Instagram, by Patreon, PayPal, Mailchimp, Teespring and even on platforms with Russian roots, but of Western origin, such as various  SberBank group subsidiary companies, including DonationAlerts, YooMoney, etc. About a month or two ago, Google began removing links to southfront.org from the search engine.

As a result of such pressure, we were forced to take up a defensive position, which means temporarily reducing the number of unique articles and videos published on SouthFront. However, as for a month or two, we are striving to restore the level of broadcasting familiar to our audience.

On November 12th, the article under the title ‘Fate of Transit Democracies: War or Extinction’ was published. As we were informed, for a certain reason, it became the trigger for the new wave of hostile actions against the independent voice of SouthFront.

This was strange for us, because the article is ordinary. But it includes an attempt to unveil the essence of the current events, which is already obvious to everyone. Previously, SF used to write about this more often, but today this article is among the few similar ones.

Many people write to us with a request to provide them with a PayPal address for donation, as it was before 2020. Dear friends, unfortunately, this is not possible anymore.

The easiest and safest way to support SouthFront are payments via cryptocurrencies: BTC, BCH, XMR, and even ETH.

We also have other channels that you can use to take part in our fight.

Write us to: info@southfront.org and southfront@list.ru. (please write to both addresses simultaneously);

or submit your request HERE: 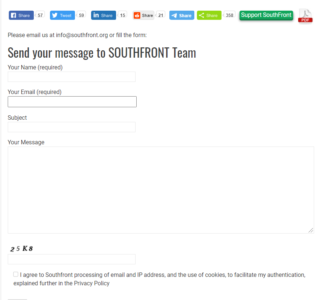 Dear Friends, you know that our activity is not possible without your participation!

“from employees of the US and NATO special services who are not even trying to be really anonymous.”

Why don’t you publish who are they, their names? Expose them completely, you have nothing to lose.

Ever increasing censorship going on. Resist!

Please bring back discus or another service where posters can respond to each other and see each others messages and you could also stop the spam I made so much money messages as well .

The current US regime is a clown show. Instead spying on South Front, they should care about the actual issues of the USA.

Southern border, labour shortage, inflation, homelessness, food shortages for at least one third of their citizens and so on!