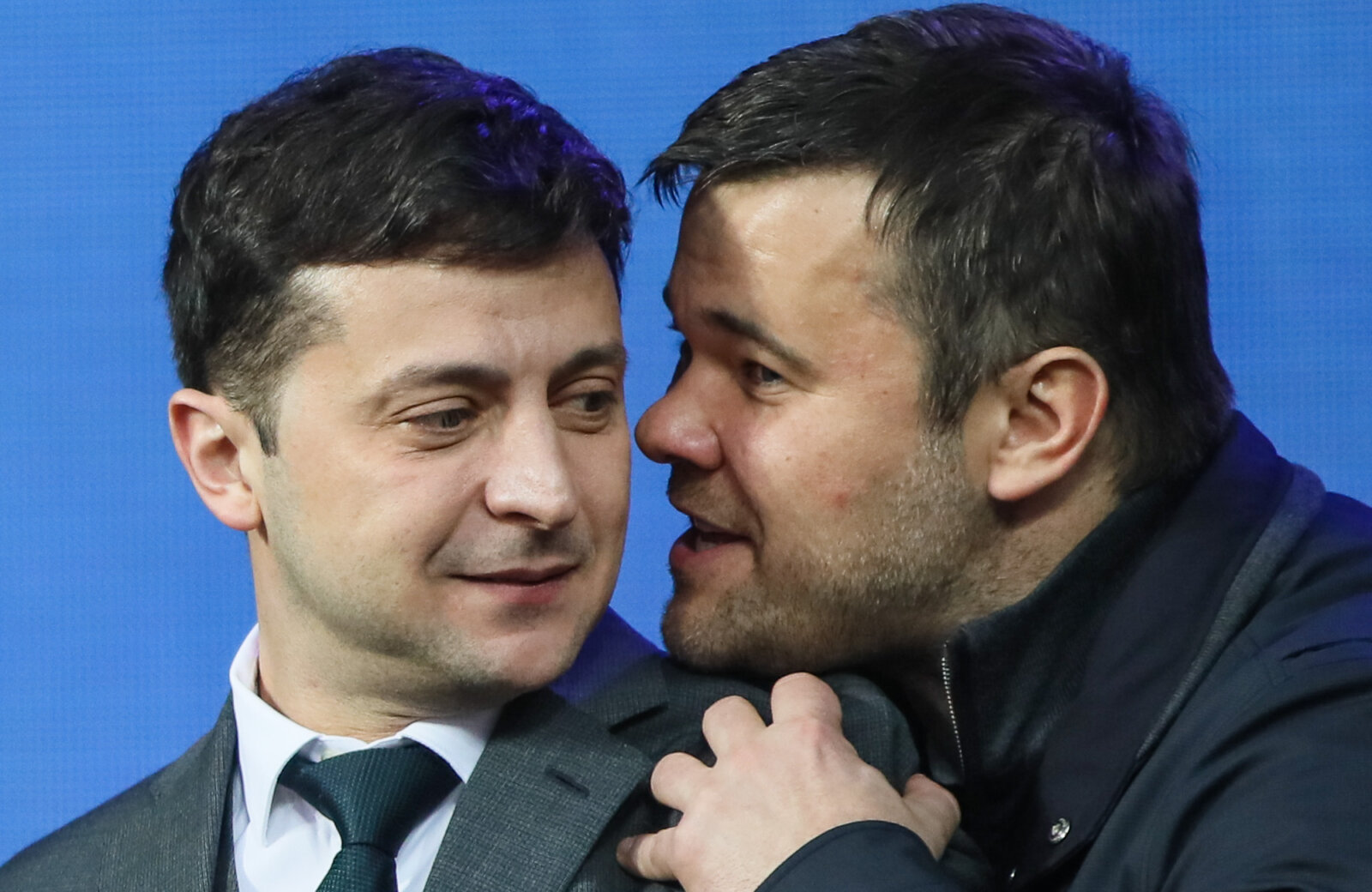 In his first hire as president, Zelensky hired Andriy Bogdan as his presidential chief of staff. Bodan was Igor Kolomoisky’s lawyer up to the very same day. This removed any doubts as to who really stood behind the newly-elected Ukrainian president.

Bogdan was also a defender of Kolomoisky’s associate, the former leader of the Ukrop party, Gennady Korban, who was accused of creating a criminal organization.

Bogdan’s appointment was not just politically suspect but also illegal, as he had held government posts under former president Viktor Yanukovych ousted during the 2014 Maidan. Those who served under Yanukovych are now banned by law from taking certain top positions.

Bogdan said on television that claims he was breaking the law were “unfair” and that he had the right to serve in the new administration.

Deputy Minister of Justice Sergei Petukhov commented on these procedures: “if someone considers the lustration law as unfair, that does not release him from the obligation to comply with the law.”

He explained that the resignation of Bogdan was a matter of principle:

“Lustration was one of the first demands of the revolution of dignity, and the Ministry of Justice did everything to properly implement the adopted law.”

The administration of the President of Ukraine replied that Bogdan will be dismissed only if the Constitutional Court decides that the lustration law complies with the Ukrainian constitution.

Another hire, was almost equally scandalous, the deputy chief of the Ukrainian Security Service (SBU), is Ivan Bakanin, who was a classmate of Zelensky and they were childhood friends.

Since 2012, he has collaborated with Kvartal 95 as a lawyer, and later managed the Kvartal 95 and Studio Kvartal 95 firms, both enterprises are registered in Bakanin’s name. Kvartal 95 is the studio that produced the TV show in which Zelensky played the president of Ukraine.

In December 2017, Bakanin became chairman of the “Servant of the People” party and led Zelensky’s campaign. He has no experience whatsoever in security.

Ukrainian media are speculating that he would reform the “K” department in the SBU, which is responsible for economic security.

The first deputy of the presidential administration is Sergei Trofimov from Kvartal 95. He was the executive producer of the studio. Engaged in the production and distribution of television programs.

Another deputy of the presidential administration is Yury Kostiuk, the scriptwriter of Kvartal 95.

Journalist Kirill Tymoshenko has been appointed to a similar position. He is known, firstly, because he is the son of a major Dnepropetrovsk businessman, Vladlen Tymoshenko, a partner of Gennady Korban. Secondly, Tymoshenko Jr. is the founder of the company GoodMedia, engaged in political and commercial PR.

The company worked for Zelensky’s opponents – the former president of Ukraine, Petro Poroshenko, the Prosecutor General Yuriy Lutsenko, fulfilled the orders of the Ministry of Information Policy. More importantly, it is responsible for the “Battle for the Dnieper,” showing the effective work of Igor Kolomoisky’s team when he was in charge of the Dnipropetrovsk region.

Another deputy head of the Presidential Administration Ruslan Ryaboshapka was called by the Ukrainian media one of the most likely candidates for the post of Prosecutor General of Ukraine.

Ruslan Stefanchuk, appointed adviser to Zelensky and representative of the head of state in the Verkhovna Rada, is also a professional lawyer. He met him when he played in the comedy show KVN.

Another member of Kvartal 95 – presidential aide Sergei Shefir – was even primed for the post of head of administration, but instead Bogdan received the post. Shefir has vast experience in producing humorous shows and writing scripts.

Alexander Danilyuk, Minister of Finance under Poroshenko, is expected to become Secretary of the National Security and Defense Council of Ukraine. But some speculate that he’s primed for the Prime Minister position in the upcoming elections.

Carnegie Moscow Center author Konstantin Skorkin notes that the current conflicts were predictable, and there will be a fierce confrontation ahead of Zelensky over seats in government.

“Ukraine is a parliamentary-presidential republic, the head of state cannot change ministers voluntarily,” the expert recalls. His opponents will also use the public opinion after the hiring of Kolomoisky’s lawyer.

“He is trapped between internal and external players. There are politicians, there are oligarchs who have made investments and now want to cash in on them.”

Separately, on May 27th, Zelenskiy’s team invited applications from members of the public to take part in the snap election in July and become members of parliament for his new Servant of the People party.

According to the idea, the candidates must be “highly moral,” and don’t need to have previous political experience, everybody can apply through a website with their credentials and proposals for new laws.

The applicants would then be screened with the help of international companies.

Officials from the party, named after the television show that made him famous, might use a lie-detector to test the candidate’s honesty when the MPs to be promise not to be corrupt.

“Of course, our opponents are old-school politicians,” said campaign chief Oleksandr Kornienko. “They are currently trying to create the impression that apart from them there is nobody able to run the country.”

That’s what sets them apart from your professional politician – morals.

“First of all, this person should be highly moral, with deep principles and with a desire to understand and carry out the tasks that Ukrainian society will set for them,” party leader Dmytro Razumkov said.

As usual, the only thing that matters is which part of the elite gets to assume power. The process by which this happens, republic, monarchy, democracy, theocracy, is not that important, it’s just a form of legitimization. In the end its just a real life version of Game of Thrones. Only one that never ends.

No article about “dissolution of Russia” today? Well, let’s wait, it’s only a beginning of the day…

A Jewish state in full Europe, the Askenazites could liberate Palestine from their shameful presence and return to their homeland, the Khazaria.

All pretend “Jews” to get free money from the dumbass western brainwashed idiots. These Uki AshkeNAZI are NAZI created scum and a threat to Russia and the world. Most became “Jews” overnight in 1992.

No, I was just asking for another “dissolution of Russia” article… ;)

Kolomoisky, the Head of the European Jewish Community, over in Ukraine and the guy who founded the Nazi Azov Battalion?

Dmitry Yurash, didn’t he lead Pravy Sektor and isn’t one of his relatives the Spokesperson for the comedian come President?

How did Zelenskiy win the 2019 Ukrainian presidential bid if Ukraine is a rigidly nationalist country?…

‘…Sviatoslav Yurash is Volodomyr Zelenskiy’s spokesman and is one of his top advisors. What does that tell you about the election?…

…The link from OUN Nazi murderers to President-elect Volodomyr Zelenskiy

Across the history of Ukraine, we see the Diaspora nationalists considering only themselves and only their nationalism worthy of Ukraine. From WWII through the 2014 coup every other political leanings have been met with violence.

“These people have had a chance to become Ukrainian George Washingtons,” says Yurash. “And they’ve wasted it.”

Sviatoslav Yurash is a name I’ve kept an eye out for since the near the beginning of January 2014 when he walked onto EuroMaidan and demanded to be the international spokesman. And they let him.

After that, if you wanted to interview or speak to Aresniy Yatsenyuk, Petr Poroshenko, Oleh Tianhybok, or Vlad Klitchko; you went through Yurash….

A true Nazi would never be a paid lackey of a Zionist Jew in my opinion. The Ersatz Nazis of Asov etc are no different to opportunist thugs who seek to lie ,cheat and steal as a career.

Choice of Soros and Kolomoisky, with one of the Yarosh family members as Spokes Person. Now what on earth could go wrong?

wow K.’s lawyer. who would have thought. from one matzah ball to the next. i’m sure this will end well. lmao

Oligarch K is trying to persuade President Z to default (on UA’s debts) to the IMF at present. Actually, quite interesting…

Two comedians together it seems, AM

Reminds me of Porkie and Kerry lookalikes.

Poor Ukraine, its only hope is its greatest fear; Russian takeover of their borderlands.

The Uki hohol arseholes have sunk to the pits with handing over their fake state to fake Jew AshkeNAZI scum!

When the US unofficially annexes a country it leaves nothing to chance, all politicians from all parties are servants of America. The US will never willingly allow democracy. The gun and money are the only things the US understands.