On February 20 noon, the remaining militants in Greater Idlib launched a large-scale attack on Syrian Arab Army (SAA) positions in the region’s southern part with direct support from the Turkish military.

The attack, which is targeting the town of al-Nayrab near Saraqib city, is being carried out by al-Qaeda-affiliated Hay’at Tahrir al-Sham (HTS) and the National Front for Liberation (NFL). 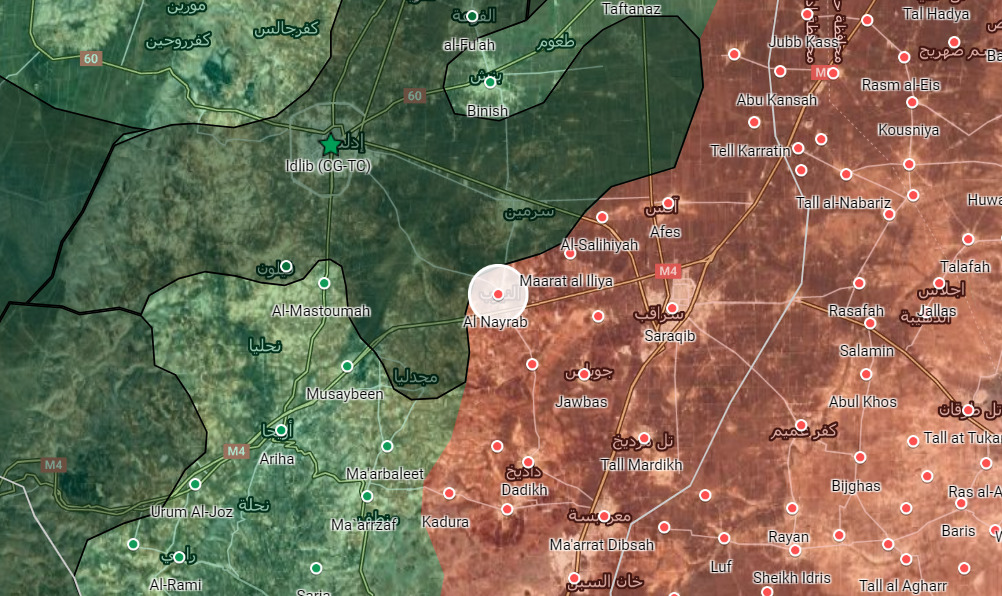 The Turkish Armed Forces are reportedly providing the militants with fire support, using rocket launchers, howitzers and even battle tanks.

Syrian opposition activists released videos showing Turkish commandos units and battle tanks deploying around al-Nayrab a few hours ahead of the attack. It remains unclear if these troops are directly taking part in the offensive.

Opposition sources are claiming that most of al-Nayrab was captured by Turkish-backed militants. Meanwhile, pro-government sources are saying that the attack was repelled.

Warplanes of the Syrian Arab Air Force (SyAAF) and the Russian Aerospace Forces (VKS) are providing the SAA with close air support. Unverified reports claim that Turkish personnel were killed and that the Turkish Armed Forces lost some equipment.

The attack on al-Nayrab is the biggest Turkish-backed operation against the SAA in Greater Idlib, to this day. Over the last two weeks, several smaller attacks were carried out. All attacks ended with Turkish-backed militants sustaining heavy losses.

Since this is Syrian territory, Russia should be bombing the invading Turkeys and their terrorists. The goat fucker Erdogan is on a rampage and thinks that Russia will blink and he can annex even more parts of Syria. It is surprising that Egypt being the largest so-called Arab state with 100 million people is totally silent, even as Erdogan invades Libya for oil and gas. The Turkeys are trying to act as roosters.

rats are being annihilated

The problem with Putin and Russia in general is that they want to play by the book…They want everything using “International Law” and agreements signed on paper when their opponents don’t even care about that. They have studied the Russian weakness for quite a while now…Putin calls USA and the West “OUR PARTNERS” .No they are not your partners. Turkey blatantly shot down a Russian plane and went smiling to Moscow and got the S-400s,idlib and parts of the North of Syria as a deal…What did Russia get? EGG ON FACE! In the North the USA is spitting on their face blocking their military vehicles and driving them of the road and telling them “You are not our partners…You are nothing” WHEN ARE THE RUSSIANS GOING TO GROW A PAIR AND REALIZE THEY NEED TO BE IN CHARGE!? Not played on…I am done with them! I was feeling really proud of Syria”s achievements but now i see they are fc/kd if they have Russia as a “Partner”

Really? Here we go. Already started while Russians are in the “Board Room” in Moscow waiting for “Talks”. https://www.almasdarnews.com/article/turkish-forces-launch-offensive-against-syrian-army-in-eastern-idlib/

Thanks for your Info ,Tim.

So stupid from Erdogan, who should know that the patriots are crap, and what does he expect after ordering the S-400. Has he IQ as low as an ape?

Russians killed far more Turks in Syria then vice versa, they just don’t brag so much. Turks shot down one plane, Russians destroyed entire turkish convoys… Peace negotiations? Well, you negotiate peace with your enemies not with your friends…

Putin is an Israeli puppet

If he would have intervened in the war aside israel not Siria….!

So you say Syria is fucked with Russia as a ‘partner’. Who do you propose as a better partner? Go back to 2015 and tell me that Syria was better off without Russian intervention. It’s fine to complain but instead of just whining give us your solution.

You don’t understand. I support Syria 100% and what it has achieved so far.i am just disappointed with the concessions Russia tries to make to please Turkey. Turkey has always laid claim to the Northern and Western parts of Syria since it’s formation and anyone who can’t see what the Turks really want is either too blind or too stupid. This was the only opportunity Syrians had to regain the whole of their country back. When they had the manpower and the morale needed which was a boost. They lost momentum and i’m afraid they might just accept Idlib is Turkish land…Sorry!

NOT LONG Turkey asked US to deploy patriot misslile . it means Erdogon slave running to thier master back. And Russia will become more aggeressive. bcuz turkey is in Syria land and neither US nor nato will help if SAA or Russia killed thousand of turks soldier.

“i am just disappointed with the concessions Russia tries to make to please Turkey.”

What concessions? Fighting a war costs a lot of money and lives. Russia has used diplomacy to cut deals with Turkey and various rebel groups that saved Syria lives and money …. neither of which Syria had to spare. It’s easy to criticize in hindsight but consider that when Russia stepped in in 2015 Syria was teetering on defeat, cut off from revenue and sanctioned by the west. Russia brought a corpse back to life.

“This was the only opportunity Syrians had to regain the whole of their country back. …. They lost momentum”

Syria’s military is battered. Syria is broke and doesn’t even have access to their own oil. They’ve been fighting for the best part of a decade non stop. They can’t sustain offensive after offensive. Machinery breaks down, supplies run low and fighters get exhausted. These ceasefires help the Syrians as much as they help the rebels …. probably more. They are fighting smart …. setting reasonable objectives, advancing in small bites and consolidating their gains so they don’t get overstretched.

Not until the Putin oligarchs give way to real Russians.

Putin is as real a Russian statesman than anyone can be,,,You mean real Russians like Yeltsin and Nemsov who drove Russia to near bankruptcy selling their souls and resources to the west at peanut price? Get real! At least try to have a mature conversation

You are 100% correct except for one thing: Russia does not want to fall into a trap and give the west more ammo to use against them. The one thing that US and EU media excel at….is PR and propaganda which they have been pros at since the 30’s. They EXCEL as smear campaigns and misdirection. AS SOON as Russia does something not by the book, US and EU will foam at the mouth from ecstasy because that will allow them to run “Russia bad” campaign for MONTHS.

no, only turkey backed milants

So Nayrab was lost on the ground but SAA and company are counter attacking. Lets see who gets to hold it in a few more hours.

Looks like he just bombed turkish troops… not enough for you and @kloveandlight:disqus ? Perhaps you should go to Syria and help them a bit? No?

Sure retard, I’ll send your whore mom to terrorists and you should join her soon you dumb piece of shit.

Continue raping your ecstacy drug mommy. Do you know your mom.

Monkey, I know your mom: $1 ugly, filthy, crack whore gagnraped by 1000 terrorists every day… go clean her asshole with your tongue when they finish.

Please introduce me that sick bitch my son.Look like you are on high old people rapist if there is no gaots and camels.

Monkey, you ask me to introduce you to your mother? Try searching brothels in Aleppo, if your mom is still alive… I blame my dog tho, he fucked your mom’s asshole, so she spawned you from her camel’s bum – a dumb, boring piece of shit.

Now stop wasting thread space with your imbecilic gibberish, and stop wasting oxygen: go back to your mom’s rectum and die there. Dumb turd.

It is good my son you remember your tradition and way of up brings.Dont cry soon we will finished you off in Idlib.Now chop off your mom’s head cruel boy.

Did you fall out while your mom was escaping to hellaviv. Bloody cheap gay bastard.Shut up asshole undertaker.

Russian air force is bombing them … all gloves are off now

SAA should destroy TAF….there should be no room to allow TAF backed Jihadists to regroup or counter any form of attack.

I am waiting for the order of the bravest, brightest, wisest, cleverest, president of the world to destroy turkish units in Syria.

Seems russia pull out their electronic counter measure against that manpad

absolutely no doubt TURKS are the invasion force

do not spam here!

Fuck off solomon, there is no such thing as forum police, let the other fellow.post as he pleases.

these are the forum rules, not my ;)

Thank you for these updates.

SAA are thugs, not even the bones of the dead are safe

So says the Daesh head-chopper while he keeps his wives in cages.

You haven’t a clue, just stay in your little safe bubble mate. You’re better off

Don’t worry, I’m sure Israel will rescue me

Says some random guy with a completely hidden disqus profile. What a laughable comment.

I’ll teach you something!The people you see here are super informed. Once you see something reported here, it takes a minimum of 5 or so hours to be reported in the Western Mainstream Media channels and a maximum of even a week. I have seen something reported on South Front/Veterans Today/AMN/ RT NEWS but it takes 1 week to see the report on BBC or CNN. TRUE STORY!

you shouldn’t take people who are obviously less intelligent seriously , it’s a waste of energy

Yes. We should all trust CNN Mr. Russian American.

So the 2 Turkish soldiers killed and the 6 wounded reported by the Turkish defence ministry died of Malaria IN IDLIB right? OK

RAT forces continue to attack al Nayrab .. 3rd attempt … TURK forces no longer in this as casualties are severe