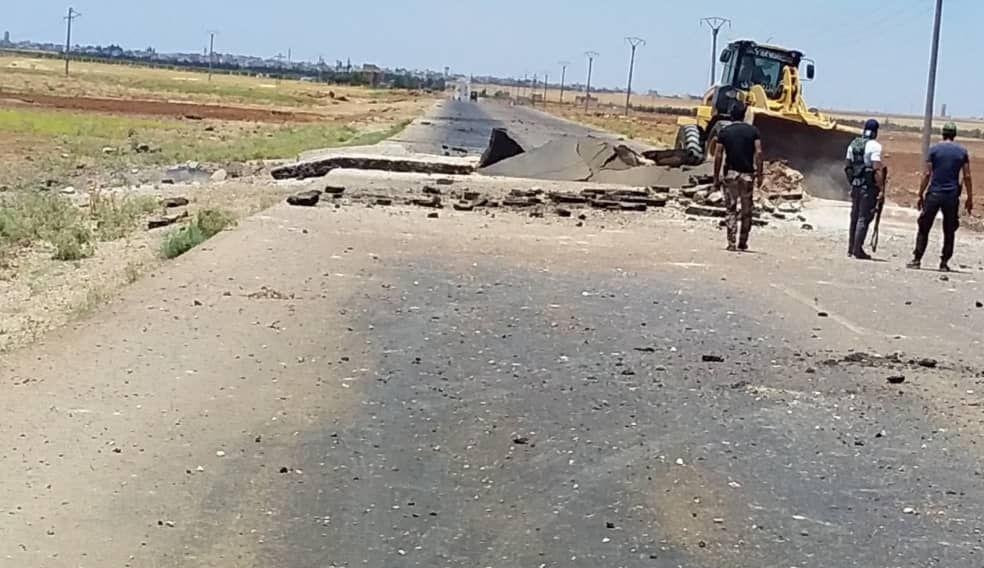 At lease seven Syrian service members were injured on August 31 when an improvised-explosive device (IED) struck a bus that was transporting them in eastern Daraa.

“Around 14:30 militants targeted a military bus with an explosive device, they had planted between Eastern Ghariyah and al-Karak in the eastern Daraa countryside, as a result seven soldiers were injured, one of them is in critical condition,” the Syrian state TV reported.

There was no immediate claim for the attack. However, pro-government activists said that ISIS cells in southern Syria were likely behind it.

Last month, five soldiers of the Syrian Arab Army (SAA) were killed and many others were injured in a similar attack in the western Daraa countryside.

ISIS and other terrorist groups are currently working to restore their influence in southern Syria in order to destabilize the region, which was liberated by the SAA last year in a large-scale military operation.

Not good, not good at all. RIP heroes.

Just posted this, but, wonder if this is payback for the 7 fallen heroes?

Interesting stuff…. and I like that site, some good news on there thanks.

No more links thanks.

ISIS must be(or seems to be) alive to justify the US presence on Syrian soil… What I say!? Israel is near Daraa?

Both Zionist and CIA are training large numbers of Wahhabi terrorists, mostly from Jordan, Libya and Egypt at al-Tank base in occupied Syria. The idea is to take SAA resources away from Idlib operations.

One day there are Zionistic pigs, the other day there are ISIS rats. Who let them in? There are three ways, one is Golan, second Jordan and third, which sends Wahhabi scum east to Palmyra is Al Tanf. So no more snackbar shouting bearded monstrosities suicidal attacks. And why is that? Because of restoration of peace in Daraa. No more of that. Never.

Wonder if the above was the reply they received?

I was given a link to this video, from Ruca. Well worth watching, especailly for a recap of events. Including the John Kerry leaked tapes and interviews with President Assad.

Why, would the moderate ‘liver eating, head choppers’, without military jets, find their first priority is to take out the Syrian Air Defence Systems?

However, do believe they managed to take out at least 40 of the ‘liver eating, head choppers’ today.

‘…Some three hours ago an air- or missile strike in Syria’s Idleb governorate hit a meeting of leaders of the al-Qaeda aligned Haras-al-Din and Hay’at Tahrir al-Sham (HTS) aka Jabhat al-Nusra. Both were killed. It is likely that leaders of other Jihadist groups were also present. The hit completely destroyed a Haras al-Din guesthouse or headquarter. The Syrian Observatory says that more than 40 people were killed in the strike. The hit will make it much easier for the Syrian army campaign to liberate Idleb governorate… ‘

From Moon of Alabama and link is posted on another comment, below.

The pathetic Americunt losers are trying to deflect the SAA from Idlib successful offensive by opening up new fronts for their headchopper darlings in Daraa and Palmyra region. The SAA should increase local militias to control the liberated territory and not move its professional units from Idlib, which is exactly what the Americunts and Turkeys want to take the pressure off the headchopper terrorists. The CIA base at al-Tanf is training terrorists in large numbers and has to be liberated.

It is no wonder Daraa and the south are a hotbed of rebellion. After the reconciliation the secret police has started to murder many of the reconciled rebellion leaders and forced conscription of former rebels. Whole units in northern Hama are made up if former rebels, many are killed.This behaviour of Assad breeds rebelion and is an aded reason why SDF, containing many former rebels, wil neve accapt going back under a direct rule of assad on their region. His rule is a direct rebel breeder. It is easy to blame IS, it might even be true. But Assad is to blame.

And lastly, there is hardly any reconstruction and the economy keeps on going south.

To some degree your comment is valid, Bashar al Assad is an accidental leader as his brother Basil died in a car crash and he was the heir apparent. Bashar is Ophthalmologist and not a politician or a military leader. He has not engaged the Syrian populace or started a well laid out reconciliation plan. At the end of the day every war ends in some sort of a peace plan. Even Hafez al Assad should have never returned Abdullah Ocalan to Turkey, which pissed off the Kurds who were loyal Syrian citizens. Another fatal mistake both Assads made was to try to please the treacherous Americunts and keep the occupied Golan front peaceful and that gave the Zionist scum incentive to annex the Golan. Bashar is basically a good, decent man, but in Arab world with rampant sectarianism, shifting alliances and tribalism, you need a strongman with a strong hand. His brother Major General Maher al Assad, a professional soldier, who was slightly wounded, but still commands the 4th Republican Guards Division is a better choice for Syria in the long run.