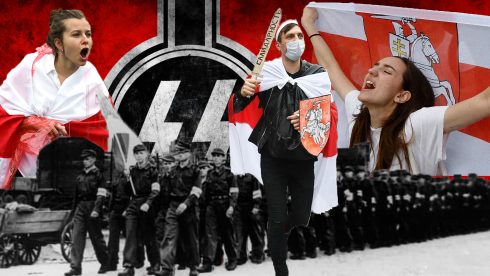 On September 28, an officer of the State Security Committee of the Republic of Belarus (KGB) was killed during a special mission in Minsk.

According to the Investigative Committee, the shooting took place in an apartment when KGB officers were checking addresses of those potentially involved in terrorist activities.

A man in the apartment opened fire with a hunting rifle, killing one of the Belarusian state security officers. The shooter was eliminated by return fire. 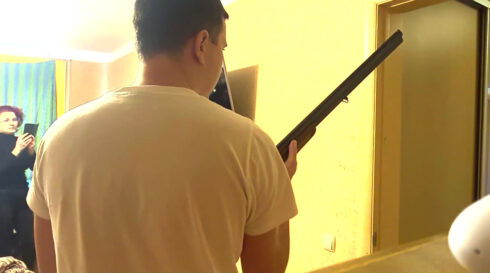 According to several reports, the man killed in his apartment was an employee of the US EPAM Systems IT company, Andrey Zeltser, 32 y.o. He had a wife and a child.

His victim’s name reportedly was Dmitry, born in 1990. He had a wife and a small child, too.

Belarusian MP Oleg Gaidukevich, said that the operation was carried out according to the data on “members of the opposition-linked extremist community”. He claimed that they called for “the murder of officials and armed resistance to the authorities.”

” For a whole year, the scumbags called for the murder of officials and armed resistance. And here is the first victim. The reaction should be tough and merciless within the framework of the law. Tough and merciless. There will be no conversations with terrorists. Measures should also be taken to bring to justice those who are abroad and manage, finance and organize this. Everyone should be held accountable, everyone. This is a hybrid war against our country. Eternal memory of the deceased employee and sincere condolences to the family.”

The video showing the incident was shared online. It is heard that the officers counted to three before breaking the door.

The young man was waiting for them, putting cameras to film him shooting at the KGB officers. A woman was carefully filming the preparations and obviously supported the ‘heroic sacrifice’ of her husband/friend/opposition comrade.

Does zeltser (seltzer) sound like a Slavic name to you? Or is it a zionist surname?

The idiots in the video are not Belorussian nationals. They are traitor degenerates in service to the west.

This is a Jewish name. I’m surprised. they normally have OTHER people do their dangerous work.

Apparently the fools were cornered BEFORE they could leave the area.

It would be nice if this website provided sources, yet ignores the far greater Islamic terrorist element and relies more on sensationalism than on substance. It also ignores the federal infiltration of “far-right” movements to sabotage their image.

“zionist surname” There is no such thing as a “zionist” culture or ethnic group, Zionism is perfectly in line with judaism which is a supremacist ethno-religious ideology.

You falsely portray Zionism as a “western” tool of imperialism to draw attention away from the pervasive jewish involvement, this is a typical jewish strategy of scapegoating that originating from the sacrificial killing of humans and animals to exalt jews from their sinful acts.

Now you go as far as to pretend all jews are fine, except the Ashkenazim (alleged Khazars), in spite of their clearly evil religious texts and nearly 3 million Ashkenazi jews from the former USSR and Warsaw Pact now living Israel. If these “European” jews aren’t really jewish, why are they recognized as jews under Russian law? Why is it still illegal to question or criticize their collective behaviour as an ethno-religious group?

You have an obsession with those “Jews”. First of all, you should learn that Sabbateanism Frankism is a very heretical movement.

Ridiculous obfuscation of reality. Zionism is a british construct, created in the late 19th century. Nothing more.

Keep trying to over dramatise every comment I make.

Imbecile.”You falsely portray zionism as a “western” tool of imperialism to draw attention away”

Common knowledge the “zionist” ideology was constructed in england, late 19th century as a political construct.

Have you ever noticed how America and Europe always place jewish and israeli interests ahead of their own? Including the interests of their own citizens in favour of jews and the citizens of israel, all of whom are fanatical jews.

Why did it take the British two-three decades to fulfill the 1917 Balfour Declaration, upon acquiring Palestine in 1919? Why didn’t they indict the Zionist terrorist organization ‘Irgun’ in killing British citizens in a bomb attack at the King David Hotel in 1948?

Why didn’t they condemn Menachem Begin’s entry into Israeli politics? I know you will falsely compare National Socialists and other so-called “White supremacists” to Zionists, in spite of their highly incompatible interests.

If you are going to indict them for the Haavara Agreement that led to less than 1% of world jewry having immigrated to Israel, you might as well indict Russia and the former Soviet Union for making far greater contributions to Israel and international jewry.

Many of their [jewish] immigrants to Israel are former KGB, you have no idea how the east-west paradigm is just as false as the left-right political dialectic based on the Hegelian model. It is nothing but a divide and conquer strategy to distract the masses from the real goal of world oligarchy, under the basis of a self-fulfilling jewish supremacist prophecy for world control.

Was probably an ukropnazi on CIA payroll.

Lukashenko is another socialist dictator like Assad. So what do you expect? These people are probably leaning towards libertarianism and are labeled fascists by the Big Brother.

If you’re interested in Jewish/Zionist name then you can give a visit to RT and start from RT editor-in- cheif and continue down,

You’re a lier, go and check her Simonyan,

If you’re interested in Jewish/Zionist names then you can give a visit to RT,start with RT editor-in-cheif and continue down,

eventually, all treacherous rats will be eliminated.

Cleaning her clock would be merciful. You can imagine how her ‘interview’ is going to be like.

Agree would have been easy to shoot and claim collateral fire, or that she was holding phone up in manner mistaken for weapon. Given she was filming and likely streaming live to web, it will be very easy charge her as willing accomplice to premeditated murder. She ‘s going down for long stretch.

Relax, order pizza and smoke a joint. They will be by soon, but you will be “happy”.

This is the right pretext to start a terrorists hunt . The right occasion to kill some thousands of terrorists ( filo- ue scumbags ) .

RIP KGB officer Next time just throw in a frag grenade. Only way to deal with cianazis.

Commie scum. The same with Nazis.

No helmets, no bulletproof vests, no shields… death is no surprise! But even with all the gear https://www.youtube.com/watch?v=dmkrPWQCmIU

he is a hero! hail hitler!

Belarus should be free !!! Happy to see that KGB scum dead