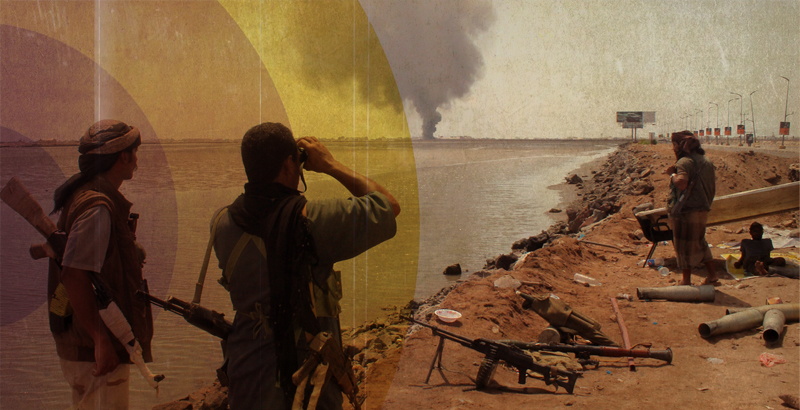 Day by day the life in Yemen becomes more difficult for the people on the ground. The Saudis have restarted bombing and seemingly hit everything in sight – schools, hospitals and food supply routes. Food is running out. But Yemen now has a new legitimate government. And the Saudis will have to either follow the conditions it will set, or all-out lose their war.

UN supervised negotiations between the former Yemeni president Hadi, supported by the armed forces of various Gulf countries, and a the Houthi alliance with the former president Saleh have failed. The Saudis demanded total surrender. A retreat of the Houthi from the capital Sanaa, a complete re-installment of Hadi as president and a handing over of all heavy weapons. The Houthi/Saleh side would never have agreed to such conditions. It would leave them without assets at the mercy of a vengeful enemy. The fighting on the ground continued throughout the four month negotiations though at a lower intensity.

When the failure of the negotiations was obviously imminent, Houthi and Yemeni army forces re-invaded Saudi Arabia. For 200 km of the Saudi-Yemeni border from the Red Sea to inland eastwards Yemeni forces initially invaded at 6 locations 5-20km deep. Video showed them in sight of the Saudi city Narjan, with half a million inhabitants, shelling the electricity station and military barracks. Laughably a joint statement from the governments of the UK, USA, Saudi Arabia and UAE demanded that:

the conflict in Yemen should not threaten Yemen’s neighbours.

A joke. A Saudi invasion of Yemen is fine with them, to respond in kind is not?

The Saudis renewed their air attacks on the capitol Sanaa and other Yemeni cities. Military targets in Sanaa had already been bombed at least twice. The current attacks make no sense and are a pure terror campaign.

Two days ago a Saudi double airstrike hit a school near the northern Yemeni city of Saada:

Doctors Without Borders wrote that the “final number of injured from Haydan school is 28 & 10 deaths. All between 8-15 years old …”

The Saudis denied that a school had been hit. They claimed that the 8 years old, undernourished children were in a military training camp. They have learned from their new Zionists friends. The chutzpah in their response to the school bombing reports was strong:

“We would have hoped MSF would take measures to stop the recruitment of children to fight in wars instead of crying over them in the media.”

An important bridge on the main supply route to Sanaa, over which 90% of its food comes in, was destroyed by a Saudi attack. Today a Saudi airstrike hit a well known hospital in Hajjah. At least 31 civilians, including hospital personal, were killed and many more wounded.

The Saudi king used the occasions to hand out a month’s extra salary as war bonus to all “active participants” on the Saudi side.

The Saudis blackmailed the United Nations, with silent U.S. approval, to not accuse Saudi Arabia of any of its atrocities and crimes with regards to its war. They threatened to stop all payments to all UN programs. The relevant UN reports are “cleaned” before being published. No longer will you see any UN comments on “Saudi airstrikes”. Atrocities are now void of any origin.

Before the war Yemen was already dirt poor. It is now much poorer. Most infrastructure is destroyed. Nearly all factories have been flattened. The country is under a total blockade. The economy is in tatters. People die of hunger. Some 80% of the population is in dire need of humanitarian aid.

But the Yemenis will not give up. They did not start the war. But they will end it on their terms. They continue to response to Saudi attacks on Yemen with attacks in Saudi Arabia. Mysteriously new self made rockets appear from nowhere and hit Saudi troops and installations. All Saudi ground attacks in Yemen have ended in failure. Their proxy troops, hired from various African countries and South America, get beaten as soon as the enter the central Yemeni highlands. Their paid Yemeni allies are unreliable and tend to switch sides without notice. Only al-Qaeda in Yemen is a trusted Saudi ally.

The U.S. and UK continue to support Saudi Arabia in their slaughter of Yemenis. The U.S. provides targeting intelligence and air refueling. Since April 2015 the U.S. air force refueled Saudi and allied planes bombing Yemen over 5,500 times. The U.S. delivers huge amount of bombs and weapons. Since Obama came into office the U.S sold Saudi Arabia weapons and ammunition for a cool $111 billion. Seven percent of the sales price is a commission that flows directly into Pentagon coffers. Generals involved in these deals end up in very posh industry jobs. For the U.S. weapon industry, the Pentagon and U.S. generals involved, the Saudi killing of Yemenis is extremely profitable.

But the Saudis are losing the war. Not only is it very expensive to hire all the mercenaries and U.S. specialists to maintain (and man) Saudi weapons but the material loss of expensive weapons is quite big. Over 50 main battle tanks have been lost to Yemeni attacks. Many more infantry carriers and other vehicles have gone up in flames (vid). Long videos show the Houthi winning nearly every engagement. They are way better soldiers than the Saudis.

On the political side the Yemenis outmaneuvered the Saudis and the long ago ousted Hadi proxy government. Late July the Houthis and the former President Saleh  and his supporters, once the Houthi’s enemies, formalized their alliance with the  formation of a common “supreme political council”. But to have real legitimacy the alliance needed some formal acknowledgement by the Yemeni people. It has now managed to gain that.

Despite Saudi bomb attacks on Sanaa the parliament was called into session. Out of 301 members 26 have died. The total remaining is 275, a legal quorum is half of that (138). On Saturday 142 parliament member attend the session and unanimously voted to form a new government.

The Chinese news agency Xinhua was the only one with decent reporting on the ground:

“The Council of Representatives unanimously recognizes, ratifies and blesses the formation of the Higher Political Council to rule the country from it’s geographically far north to Aden in the south, and from east to the west of Yemen’s official borders,” Parliament Speaker al-Raiee and the attending MPs voted with “Yes” as showed by the state TV.

The president, vice-president, and members of the Higher Political Council performed their constitutional oath in the parliament. Today the Houthi dominated Supreme Revolutionary Committee under Mohamed Ali Al-Houthi stepped down as de-facto ruler of Yemen. It had ruled Yemen since February 6 2015. Power was handed over to the newly formed Higher Political Council which is an alliance of Houthi politicians with the GPC party of former president Saleh. The former president Hadi, in Saudi exile, is also a member of the GPC. But his time is now certainly over. He is unlikely to be ever seen again in Sanaa.

Yemen now has a new government. Its formal, public formation with the vote of the parliament give it enough legitimacy to be accepted by most Yemenis. It will be very difficult to cast it aside.

“I am seriously concerned about actions being taken by elements of the Houthis, the General People’s Congress, and allies in defiance of the Yemeni Constitution and the UN process, and encourage all parties not to take any action that undermines the possibility of peace.”

According the Yemeni constitution Hadi’s election, without any competitor and no “No” vote on the ballot, was unconstitutional. He was “elected” in 2012, for a two year period. His unconstitutional mandate as president has long ended.The side the UK represents and that now insists on constitutional legitimacy has none at all.

Despite all their weapons, arrogance and money the Saudi herders of camels have again lost against the people of Yemen.

As the Hadith says:

“Halfmen” the Syrian President Bashar Assad once called the jokers of the Saudi ruling family. He was too generous. Should the al-Sauds not soon agree to retreat from Yemen to end their war and to appropriate financial compensation, the Yemenis will start to take Saudi cities. They are strong enough to do so, better dancers(vid) and they have the belief and military means to achieve that.

That would be a huge loss of face and the end of the political career of the Saudi Defense Minister and Deputy Clown Prince Mohammed bin Salman.

Great report! Hard to vind those when it comes to Yemen.

Yep, surrender Saudis when you still can! Yes, seriously!

What’s going on in Yemen serves as an example to the freedom loving people of the West. Your Zionist criminal masters have similar plans for you in case you dare to overthrow their rule over you.

The pople of Yemen know how to fight for their freedom. And they also know what freedom is. However Saudi Arabia is filled with Zio-Sunni, filled with Israeli air force pilots and their F-16’s and F-15’s. Filed with Israeli and USA advisers. And filled with South American mercenaries from that international security company which in of itself is actually a terrorist organisation. Yemen needs help, as they next generation is going to be really messed up from malnutrition. Time for Al Quads forces and Hezbollah to storm in, considering the area is filled with ISIS. They can just use the contexts of fighting ISIS and terrorism. And defeat Saudi Arabia once and for all! And chase the Israeli pilots back into the Zionist master state.