On May 22, Commander of the US Special Operations Command (USSOCOM) General Raymond Thomas stated that a new development and acquisition plan for the USSOCOM would be transformative, Defense News reported.

Thomas pointed out that he will approve this five-year plan titled Program Objective Memorandum next year.

According to Thomas, this plan’s aim is to implant new cutting-edge systems that allow having primacy over capable opponents.

“In this rapidly evolving environment for the purpose of future combat development, we should consider the technology and platforms that today’s [special operations forces] use as legacy systems, already legacy systems whose sunset is nearly upon us,” Thomas stressed.

“In this POM we will address our future fixed-wing and rotary-wing requirements.”

He said that this plan would show a path of development of surface, subsurface and ground mobility.

“We will define our investment in SOF-specific space and cyber programs, precision weapons, and cutting-edge communications networks,” Thomas added.

Thomas pointed out that nowadays situation requires to increase lethality, maneuverability and survivability of forces. He stated that US forces need an improved body armor, ballistic helmet systems and communications gear. Thus, the command has to find new ways of development and improvement.

“We are challenged together to make decisions of this import while facing a more rapid cycle of technological advancement,” Thomas said.

The general claimed that decisions must be taken faster as we “are operating at the edge of communications and logistic networks.”

“The challenge now is to develop and field systems that enable the operator to quickly make decisions and take action appropriately and consistently, Thomas pointed out.

“Our acquisition processes, the speed of development and timeline from conception to deployment in these critical domains are out-cycled by the trends and speed in the private sector technological development.”

USSOCOM… Where everyone gets a participation beret. Did they hit that 100,000 ‘special ops’ soldier level yet? Must be getting close by now (but it’s classified, of course).

“The challenge now is to develop and field systems that enable the operator to quickly make decisions and take action appropriately and consistently, Thomas pointed out.

We use to have a ‘field system’ like that – I think it was meat-based.

This another milestone in the growing neocon Khazar Mafia fear of dissent in American public opinion. They can’t have people understand that they’re making their own little private SOCOM army to avoid that troublesome old rag: the US Constitution. That army needs real equipment, not regular army junk.

The MSM will tell the unwashed masses what they need to know about ‘regular’ foreign military ops and cover up secret ones (internet conspiracy theories).

If all our questionably-legal foreign military operations are secret missions carried out by special operators, then there’s no way for that God damn nosy American public to object or interfere with neocon Khazarian Mafia schemes. Western democracy thrives on censorship and secrecy, and its leaders must be immune from little people law. Neocons need their own secret army, damn it! They’re doing God’s work here.

Let me ask you a question, Serious. Why do YOU live?

You’ve clearly made my life rather uncomfortable… why not just die?

he is a hasbara , using a common tactic that is to present himself as american hater , zionist hater ..

After the Civil War, USA has became more and more a private country for private owners. Everyone knows that the Federal bank has nothing federal in it. Why not making the US army a private army ?? It’s just the logical next step.

Be oh so very careful what you wish for friend. Eric Prince has already engaged both sides of several military operations for his profit, of course.

Federal bank with nothing federal in it is bad.
Currency must not be a credit.
US army being a private army is bad.
Nation that does not defend herself does not have possibility to survive as nation.

Its been a mercenary operation for the corporates and bankers for a long time. Other than the Brits burning down the White house there has not been a direct threat to the US mainland. 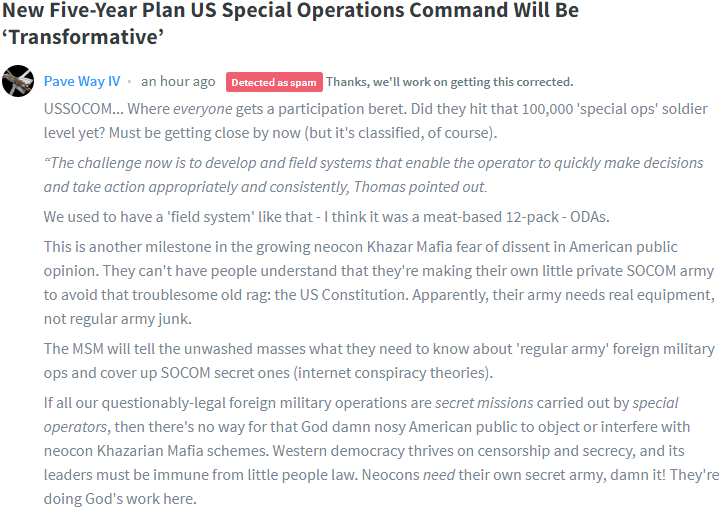 Where did the above happen ?.

It’s likely that it detected some form of copy pasting from another news source. This happened to me multiple times when I copy pasted some quotes a few months ago from some politician on a mainstream news site.

I can assure you its not the “stazi” working at southfront.

its not SF , it’s Disqus spam filter , because many people report Paveway’s posts as spam in the past

Everyone is entitled to their opinion, I guess.

Send an email to the SouthFront and ask them to look into it. Include the link to the article and your own comment (right click on the time shown in front of your username, then copy the link location).

I leant it a bit late, but since I started doing that, all my comments returned. Nevertheless, do it as soon as you see the ugly red rectangle so your usually good comment doesn’t get buried, not to mention Disqus’s internal reputation system which with every un-fixed/un-challenged “spam” detection (the result of trolls’ handiwork) it lowers the minimum needed flags, so comes a time which by a single flag your comment will disappear.

Thanks, Garga, but I don’t believe in ‘asking’ SF to do something to have my posts show up. If they’re not aware of it, then so be it. I’m not suggesting it’s the fault of SF anyways – Disqus ‘service’ is owned by Zeta Marketing, and they have their own ‘rules’ above and beyond what SF has for managing posts. Zeta is a data-harvesting business that connects Disqus posts with emails and other social media posts to profile users – then sells that data to someone else.

Have you noticed that it seems all companies/organisations starting with Z seem connected to the political philosophy starting with the same letter! Codes in plain sight?

your posts were routinely downvoted and targetted / reported as spam by hasbara / astroturfers , so it is normal to see it being regarded as spam

Seems it was directly connected with the simultaneous use of ‘neocon’, ‘deep state’ and ‘Khazar Mafia’ in particular posts. That’s interesting in its own right considering other rather virulent posts I see here. Oh well.

How are they going to PAY for All this Research & Development? Because they are Bankrupt… Start Paying your Debt to the World First U.S.A… Before Spending another 6 TRILLION DOLLAR FIAT MONEY…

Have they been having a lot of casulties? Just the other day they said 40 of them killed hundreds of russians and syrians with no losses…

I wish I had all the info…

“He stated that US forces need an improved body armor, ballistic helmet systems and communications gear.”

Five Year Plans, now where did they have those…?
It even looks like the old Soviet Union – USSRCOM General Raymond Thomas….
It really is true, UZA has inherited USSR Trotskyism etc.