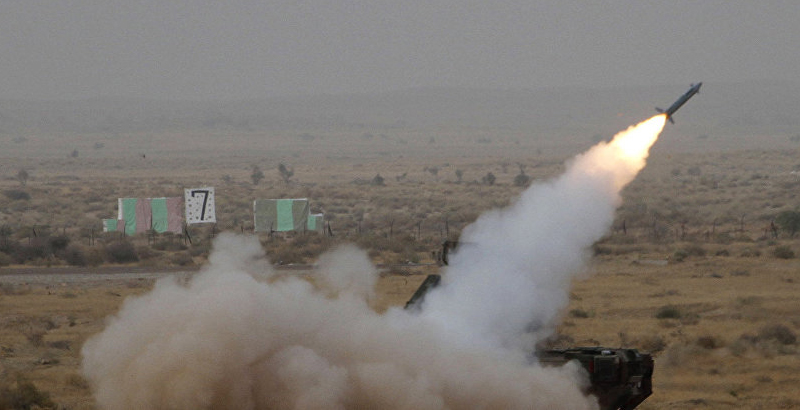 Israel and India have agreed to a deal for a medium-range surface-to-air (MRSAM) missile system in order to jointly expand the Indian aerial defense systems and strengthen ties between the two countries, the Mail Today newspaper reported.

According to reports, the deal, which marks 25 years of cooperative diplomatic ties, was approved by Indian Prime Minister Narendra Modi. The MRSAM missile system is planned to be produced by the Indian Defense Research and Development Organization (DRDO) and the Israeli Aerospace Industries. As an official from the Indian Defense Ministry told the Algemeiner news website, the formal contract will be awarded in late March.

“The formal clearance for the MRSAM project has been given by the Cabinet committee on security headed by the prime minister last week,” the official noted.

Reportedly, the missile system is going to be used for protection of the Indian air space from enemy aircraft and drones, flying within a range of 30 to 45 miles (48-72 kilometers).

“The Indian Army wants to use the MRSAM to provide air defense to the mechanized formations operating in the plains, semi-desert and desert sections of the country,” the Defense News information website quoted an official from the Indian Army.

However, according to the website, there is an issue of who will have full intellectual property rights. As retired Indian Maj. Gen. Bhupinder Yadav noted, the missile platform “will be manufactured in India,” and will feature “80 percent indigenous content,” however, at the same time, the independent patent rights to the missile technology belong to the Israel Aerospace Industries, “with the exception of those subsystems developed by the DRDO.”

According to the Algemeiner, the Indian Army is going to get 40 more MRSAM missiles, which are expected to be operational by 2023. Previously, three flight tests of the weapons system were conducted by the DRDO and the Israeli Aerospace Industries. “The missile successfully intercepted a moving aerial target in all three tests,” an official from the Indian Defense Ministry said.

Tel Aviv is capital of Israel not Jerusalem. Please correct your headline.

All of Israel’s government institutions are in west Jerusalem, and West Jerusalem is legally within Israel (part of the pre 67 borders).

“The City of Jerusalem shall be established as a corpus separatum under a special international regime and shall be administered by the United Nations.” – General Assembly resolution 181 (II), passed on November 29, 1947

The Security Council reaffirmed this afternoon that Israel’s establishment of settlements in Palestinian territory occupied since 1967, including East Jerusalem, had no legal validity, constituting a flagrant violation under international law and a major obstacle to the vision of two States living side-by-side in peace and security, within internationally recognized borders.

Why are the good Indian people working with these gang member terrorist of Zionism? India should work with Russia, or Iran or Italy or Japan or something. Forget those who have hacked into Indian research computers and stole all of their research work. https://www.youtube.com/watch?v=KBHAKV3YUfg