China has officially introduced its newest CH-5 drone that is “even better than the MQ-9 Reaper.” 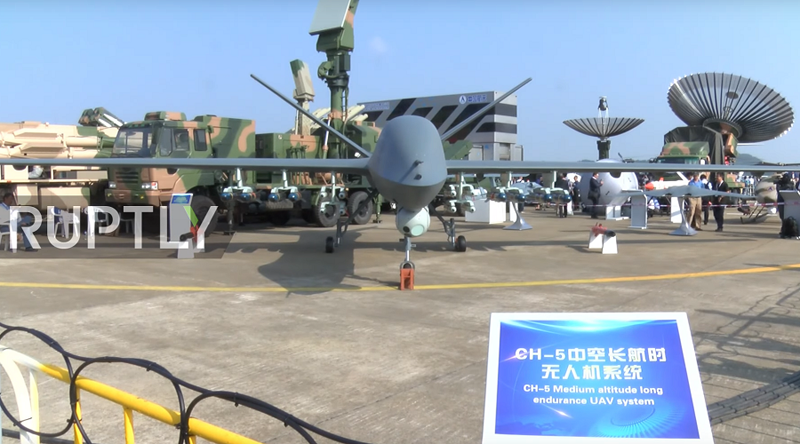 China has officially introduced its newest CH-5 drone at the 11th China International Aviation & Aerospace Exhibition in Zhuhai. According to Beijing, the unmanned aerial vehicle (UAV) has superior tech specs to equivalent US models, including the MQ-9 Reaper.

As chief designer of the CH series of China Academy of Aerospace Aerodynamics, Shi Wen, told local media ahead of the exhibition, the CH-5 “can perform whatever operations the MQ-9 Reaper can, and is even better than the US vehicle, when it comes to flight duration and operational efficiency.”

The CH-5 is capable to stay in the air for 60 hours and, according to Shi, soon, the flight time will be expanded up to 120 hours. The maximum range of the UAV is 6,500 km, and it is expected to be expanded up to 10,000 km, giving it the longest range of all hunter-killer drones. The CH-5 has a wingspan of 21 meters – twice as big as its predecessors in the series, and is capable to carry up to 24 missiles and about 1,000 kg of equipment.

Meanwhile, the MQ-9 Reaper has a wingspan of 20 meters and is capable to fly for 27 hours. This drone is in service since 2007, and, reportedly, a bigger model with longer flight time is currently being tested. The difference in flight time of the two UAVs is explained by the fact that China has used a less powerful, but more fuel-efficient engine.

Beijing claims that the country intends not only to export the CH-5, but also to license the technology for its manufacturing in other states.

“Several foreign nations have expressed intentions to purchase the CH-5, and we are in talks with them,” Shi said.

As Shi noted, over 10 countries have purchased previous CH iterations, which are currently used by Egypt, Nigeria and Iraq.

“Another advantage is that the CH-5 is capable of making a joint strike together with its predecessors, the CH-3 and CH-4, because they can share the same data link and control system. Therefore, it is very easy for current users of the CH-3 and CH-4 to introduce and integrate the CH-5 into their drone network,” he pointed out.

Shi also added that the CH-5 would be an ideal variant for any country, fighting against terrorists in the Middle East. He stressed that Beijing intends not only to flood developing countries with cheaper models of drones, but also to become a technological leader in the rapidly-growing industry.

“We may be a little inexpensive, but we do win by our reliability, not our lower price,” Shi pointed out.

Because they ARE mock ups. 1:1 models for display only, at least some parts are.