The US is seeking to train new improved rebels to overthrow Bashar al Assad. 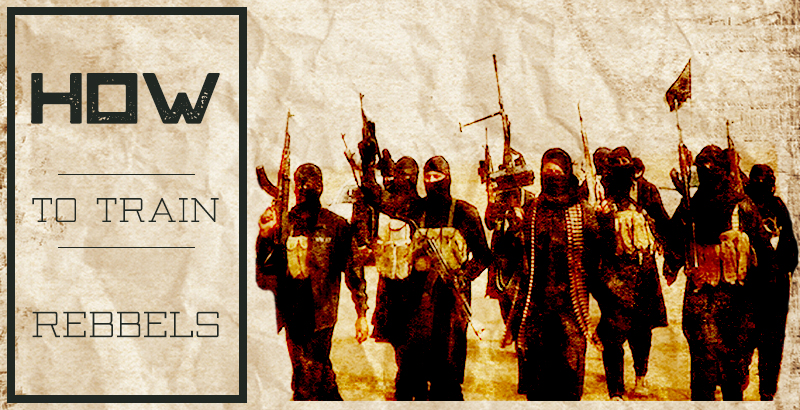 After the Syrian government requested Russian air support in the country to fight jihadist militants, the fear of losing this geo-strategic point in the West, but especially in the United States is growing stronger. The coalition forces that have been bombing ISIS targets for the past year have proved that without any ground support or intelligence there can be little success against this kind of terrorist organization. Learning from the Russian example of coordinating its attacks with SAA forces on the ground, the White House and the Pentagon are preparing to train even more so called “moderate” rebels.

US trained militants, including Kurdish nationals, will serve as a link between coalition air forces and the actual targets on the ground. Washington continues to pursue it’s goal of gaining a solid foothold in Syria, by training dangerous militant groups.

The first attempt was made a year ago when the United States military set up a program training and arming moderate Syrian opposition fighters in order to fight Islamic State. Although it was very expensive, an estimated half a billion dollars was spent, the program did not deliver any results. The whole program backfired as soon as the first trained groups were on the ground in early July. Most of the fighters trained and equipped with modern weapons usually fled or surrendered to different jihadist groups such as Jahbat al-Nusra. The program was eventually shut down, yielding ridiculous results of four or five trained soldiers on the ground as stated by General Lloyd J. Austin in front of the Senate panel. The whole program became very embarrassing for US foreign policy since it reflected governments approach in Syria and the civil war that is raging for more than four years.

However, US foreign policy makers are persistent. After the first attempt at arming and training trusted “moderate” rebels, which ended in a fiasco, a new training program is on the way promising to be more efficient. The Next generation of these trained fighters should be a “connective tissue” between U.S. air strikes and opposition fighters on the ground (as stated in Foreign Policy magazine.) Facts about funding and amount of money needed for this kind of enterprise is still unknown or is being speculated.

The more concerning thing about this is the notion of recruiting Kurdish people in this program. Although these new fighters would be primarily used as beacons for navigating air missions, the fact that leading a NATO country is supplying any kind of tech or training to Kurdish militants is in contrast to the current policy of the Turkish government. A shift in US foreign policy like this can seriously damage it’s relationship with Turkey, which is a very important NATO country and an important ally in the region.

Though the program is in it’s early stages, officials have claimed that the new groups will be much smaller and not under strict control when they enter Syria, but they will have same access to weapons as the previous ones. This statement raises many questions, and provides an answer to another question; How did jihadist militants come across high tech anti-tank weapons that are usually produced in the West?

The United States refuses to acknowledge the new military landscape in Syria, and continues to utilize policies that have already failed in the country once. Such policies have proven ineffective and costly, but not only in a financial way. The popular strategy of creating insurgent groups for fighting Islamic State, as well as Syrian government, are making bad situation even worse. Many of the trainees seem to lack the will or capabilities of a determined soldier who fights for his country. The big question still remains: why is the US blazing it’s own way in Syria and not cooperating with Russia and Iran against Islamic State? The “New Cold War” mentality that is present in some circles of power in the West is indicative of how deep private and state interests can go. Despite losing it’s grasp in Syria, Washington is reluctant in abandoning it’s “democratic ideals” of toppling “dictators” and establishing “democracies”, just like in Libya.