Natural gas has limited and expensive transport options. As a result, natural gas pipelines are constantly used as tool of the political pressure and bargaining. One of the most notable battlefields is the European continent, where Russia has exerted its influence through an intricate network of pipelines. Find the text with an additional information about the pipelines below the graphics. 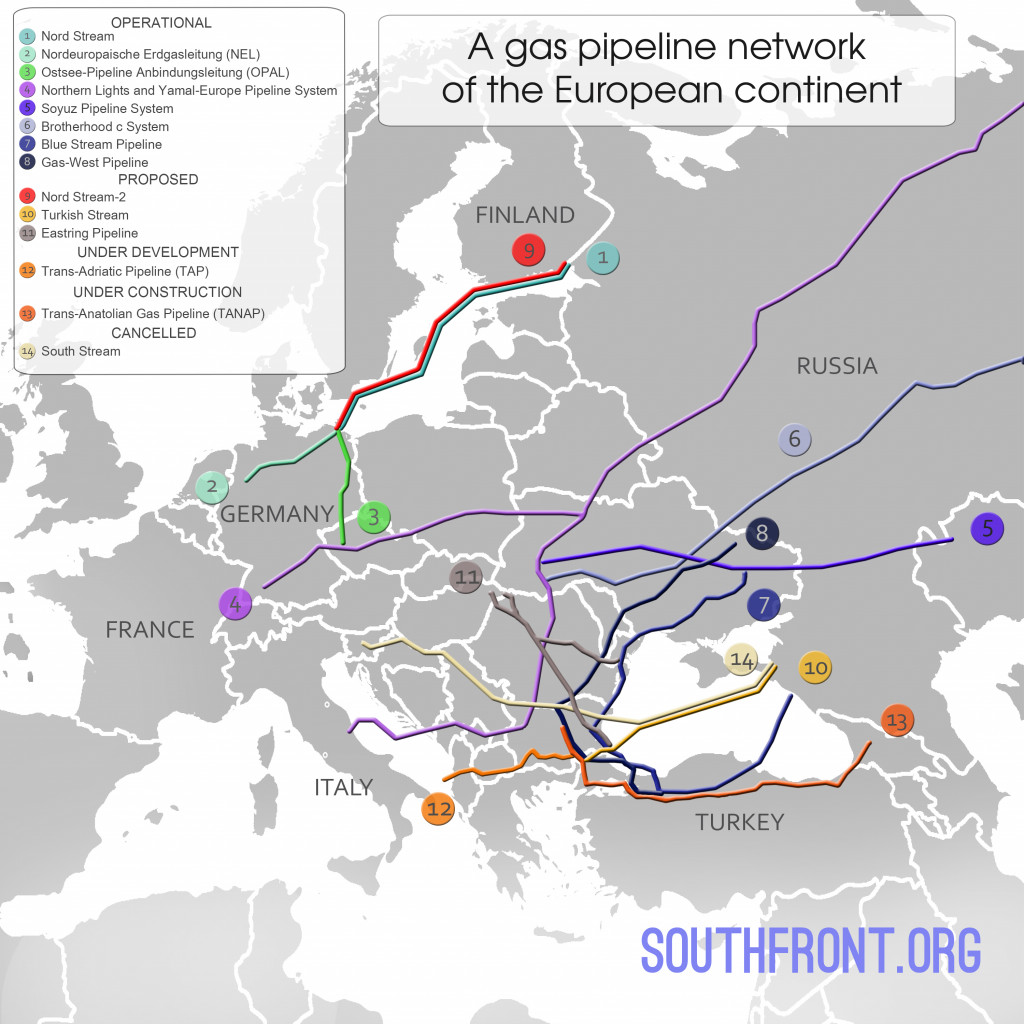 The Nord Stream pipeline became operational in 2011. First proposed in 1997, disputes between Kiev and Moscow in 2006 and 2009 prompted Russia to stop natural gas flows through Ukraine, depriving Europe of natural gas and accelerating Nord Stream construction. The pipeline enables Russia to deliver energy directly to Germany and parts of Central Europe.

The NEL pipeline is complementary to the OPAL project and connects Nord Stream to existing gas infrastructure in western Germany.

The German-built OPAL pipeline came operational in 2011 and connects Nord Stream to the gas infrastructure in eastern Germany and Central Europe. The EU Third Energy Package limits how much Gazprom can use OPAL. The European Commission was expected to increase exemption by 50 percent in March 2014, allowing Gazprom to use the pipeline to full capacity. However, the commission postponed its plans because of Ukraine crisis.

The Northern Lights and Yamal-Europe pipelines are two major systems that deliver Russian gas to Eastern Europe. Poland depends on the pipeline system and lacks good alternatives. In an attempt to become less reliant on Russian energy, Warsaw seeks to develop an LNG import facility on the Baltic Sea.

The Soyuz and Brotherhood pipelines are Gazprom’s major export routes for delivering gas to Europe through Ukraine. They have a total capacity of over 150 billion cubic meters. In an effort to avoid using Ukraine as a transit state, Gazprom is seeking alternative routes from 2019 onward.

Together with the Soyuz pipeline, the Brotherhood and Urengoy-Pomary-Uzhgorod pipeline systems are Gazprom’s major export conduits, delivering gas into Europe through Ukraine. Russia has been trying to reduce its reliance on Ukraine as a transit state.

One of two major pipeline systems that Gazprom uses to deliver natural gas to Turkey. Gazprom can deliver about 16 bcm to Turkey via Ukraine, and another 16 bcm directly to Turkey via Blue Stream. At the moment, neither pipeline alone has the capacity to meet Turkey’s energy demands. In 2014, Turkey and Russia agreed to expand the capacity of Blue Stream by 3 bcm.

The Russian Gas-West pipelines deliver gas to Turkey through Ukraine, Romania and Bulgaria. In the future Turkish demand will exceed both the existing pipelines’ capacity and a third will be needed.

Gazprom signed a memorandum of understanding with Shell, OMV, and E.ON at the 2015 St Petersburg International Economic Forum to build the Nord Stream-2 pipeline. As proposed, Nord Stream-2 would be the same size as the original pipeline and go operational in late 2019. The pipeline will increase capacity over time to balance out reduced North Sea production.

The pipeline is designed to provide an alternative route to deliver natural gas into southern Europe, bypassing Ukraine. Gazprom signed a deal with Greece for the Southern European Pipeline connector that would linkup with TurkStream at the Turkey-Greece border to move supplies into Europe. Gazprom and Turkey have yet to finalize an agreement on the TurkStream pipeline itself. One of Ankara’s biggest incentives to support TurkStream would be to remove its own reliance on Ukraine-transited gas.

Eastring would connect infrastructure in Slovakia to Romania and Bulgaria. Slovakia has taken the lead on the project and even suggested connecting to TurkStream. Bratislava wants to be part of Gazprom’s plans to diversify transit options away from Ukraine because Slovakia is the critical link between pipelines in Ukraine and central Europe.

TAP is one of the EU’s South Corridor projects designed to move gas from the Caspian Sea region to Southern Europe through Turkey as a way to reduce reliance on Russia. The TAP pipeline would connect with the TANAP pipeline at the Turkey-Greece border and send gas to Italy through Albania. Construction on the project is expected to begin in 2015.

TANAP is designed to move gas from Azerbaijan’s to Turkey, where it will connect to markets in Europe. TANAP will send 16 billion cubic meters of gas into Turkey where it will connect with the TAP pipeline to send 10 bcm onward to Europe. The TANAP and TAP projects are cornerstones of the European Union’s Southern Gas Corridor energy projects to bring Caspian-sourced gas into Europe to counteract dependence on Russia. Construction on TANAP is expected to be complete by 2018.

South Stream was a pipeline system that would have sent gas from Russia to Bulgaria across the Black Sea and then onward through Serbia into Central Europe. Gazprom canceled the project in December 2013 and is pursuing the TurkStream pipeline project instead, hoping to achieve the same strategic goal of bypassing Ukraine. The European Commission opposed South Stream and contributed to Gazprom’s cancellation of the project.