On Sunday Benjamin Netanyahu became the first sitting prime minister in Israel’s history to stand trial, as he appeared in court on charges of bribery, fraud and breach of trust.

The trial follows a ruling in May, in which the Supreme Court held that Netanyahu can serve as prime minister while under indictment and that the unity deal with Gantz did not violate the law.

The legal hearing follows years of investigations and delays – in February 2018, the Israeli police first announced that there was sufficient evidence to lodge three cases against the premier, labelled “1000” “2000” and “4000”.

Case 1000 involves charges of fraud and breach of trust, as Netanyahu allegedly received expensive gifts from wealthy friends and in return took actions in their favour. The case is based on accusations by the police that he and his wife received gifts such as cigars and champagne amounting to over a million shekels or £270,000 from Hollywood mogul Arnon Milchan, and his Australian billionaire business partner James Packer. Netanyahu claims that they were gifts from personal friends and that they received no favours in return.

Case 2000 also involves charges of fraud and breach of trust, based on allegations Netanyahu negotiated a deal with Arnon Mozes, the owner of Israeli daily Yedioth Ahronoth, for better coverage in return for promises to limit the circulation of rival newspaper Israel Hayom (a free daily paper established by Las Vegas casino mogul Sheldon Adelson meant to support Netanyahu) Netanyahu was apparently caught on tape speaking about the idea with Yedioth Ahronoth’s owner, a recording which forms a part of the prosecution’s case.

A year later Israel’s attorney general Avichai Mandelblit recommended that – pending a pre-trial hearing – the prime minister be indicted for fraud and breach of trust across all three cases, with an additional count of bribery in Case 4000.

During the first preliminary hearing his lawyers asked the three-judge panel to delay the proceedings by months, pushing testimony off until spring 2021. Judge Friedman-Feldman, who heads the three judge panel that will decide the case, turned down Netanyahu’s attorney’s request for a lengthy delay, scheduling the next session for July 19.

The trial has deepened polarization of Israeli society, with simultaneous demonstrations held to support and denounce the Israeli prime minister respectively. Supporters outside the court house An opposition rally outside the PM’s residence

From the outset Netanyahu has denied all the charges and labelled the process a “political witch hunt” spearheaded by his leftist opponents. Nahum Barnea, an influential columnist for Yediot Ahronot, observed that Mr. Netanyahu’s goal was “to delegitimize the prosecution and the judges before the trial has even begun.”

As he entered the courthouse to become the country’s first sitting prime minister to go on trial, Netanyahu maintained this line of attack, criticising the nation’s justice system and accusing police, prosecutors, judges and the media of a deep state-type conspiracy aimed to oust him against the will of the people.

Several of Netanyahu’s Likud Cabinet ministers, including the newly appointed internal security minister who oversees the police, came to the court in a show of support – possibly, also, as a challenge and an act of defiance.

The chief prosecutor Liat Ben-Ari, has been the target of a virulent campaign of threats and incitement, and was accompanied by several bodyguards after receiving death threats. On the eve of the trial, Netanahu’s allies in the Likud party stepped up their attacks, denouncing the attorney general as a criminal and saying that anything short of an acquittal would devastate the public’s faith in the justice system.

Under Israeli law, Netanyahu could face up to 10 years in prison if convicted of bribery and a maximum three-year term for fraud and breach of trust, if found guilty. However, the trial will take a long time to reach a verdict, and even if he is convicted, he will not be forced to automatically resign as prime minister – or alternate prime minister – until all the appeals and legal processes are exhausted.

Zionist perverted parasites are stain on humanity and corrupt fucks that the world needs to eliminate.

Nothing special, just another average (war) criminal prime minister from the war criminal state creation – just line up with Ehud Olmert and Moshe Katsav…
By the way, there is some spicy Jewish humor in the fact that until the indictment was finally completed, he has been able to form a government five times during that time.
And there is no need to mention that his trial should take place in the International Court of Justice in Hague, not in some Jewish court in a criminal case worth about five shekels.

Zionism is the most corrupt form of debased behaviour and allowing this sickness to contaminate humanity will end in the destruction of the planet. Zionism must be eliminated and humanity restored.

True, but keep in mind that they are only one half of the representatives of Jewish terrorism in the world, the other group is called “the international Jews” – their executors are traditionally the American Democratic heads and left-wing governments around the world. They are the ones whose evil activity is even harder to spot than the Zionist ones because they always hide behind various multinational giants, giant banks, investment funds and international media holdings, NGOs and so on. And these two groups, of course, rival each other for power over the nations of the planet. 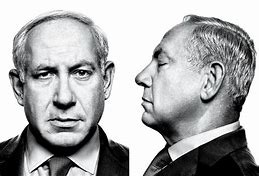 I think that should be the official photo of the PM used in all future Israeli government Communications.

So you think he will get jail time. There is no doubt he has made quite a few powerful enemies over the years and so quite plausible.

GAS THE KIKES & SAVE ON GAS!

He will end up in jail, where he belongs. Not for his bribery, but for his betrayal against Israelis and his cooperation with Hamas. Filthy corrupted pig.

I hope he gets a lifetime.

Move on nothing to see here. This criminal will come out better than ever and ready to do more criminal acts, this is just a show trial people.

Isreal could soon have a leader who is also a convicted criminal. Won’t that be refreshing.

It seems the pattern with all his crimes are fraud and breach of trust. Absolutely no surprises there. It also seems that the isreali justice system is quite adequate for Joe&Jane public but not when it comes to convicting real criminals who abuse their place in gov’t.

Criticising the nation’s justice system and accusing police, prosecutors, judges and the media of a deep state-type conspiracy aimed to oust him against the will of the people isn’t going to win him any support from non robots. Netty has a Hitler fixation and seems to think that he has the unanimous backing of his people. The protests from brave and independent thinking isreali’s say otherwise. They don’t want to be sacrificed on the zionist alter for the dreams of madmen and shysters for whom nothing is enough.

Going to be a bit of a devil’s advocate here but cases 2k and 4k can be considered psy ops for the benefit of the govt and the military. lol But is he the proper official to do that?
Case 1k should have been framed as official gifts and not personal gifts. In any case, all these have now been converted into political questions. Their discovery and indictment preceded the elections and still, the people voted for him. Since they are a democracy, the will of the majority prevails otherwise the courts are instrumental in frustrating the will of the people and the political process in their constitution.
Share and share alike leads to losses for both parties. lol