Israeli Prime Minister Benjamin Netanyahu is using pictures of himself with US President Donald Trump in his election campaign poster.

Billboard in Tel Aviv today of Netanyahu and Trump's smiling faces, with the slogan "Netanyahu: In another league" pic.twitter.com/oR8Ex1prK5

The poster from Netanyahu’s ruling Likud Party shows the two leaders shaking hands under the headline “Netanyahu, in a different league,” with “The Likud” at the bottom.

The slogan refers to Trump’s apparently strong relationship with Netanyahu. After all, in 2018 the POTUS fulfilled his election promise to move the US embassy from Tel Aviv to Jerusalem, sparking anger worldwide. The move was widely praised by the Jewish parties across Israel’s normally very partisan political spectrum.

Trump also appeared in a Likud campaign video shared to Netanyahu’s Facebook page last week which celebrated the US recognition of Jerusalem as Israel’s capital, a claim much of the world disagrees with.

Netanyahu, according to polls, is the favorite in the upcoming April 9th elections. The current Prime Minister, as well as Defense, Health and Foreign Minister is leading by a large margin.

That may change, since former Israel Defense Forces chief of staff Benny Gantz joined the race.

Polls taken after Gantz’s maiden speech on January 29 showed his Israel Resilience appears to be gaining steam in the race against Netanyahu’s Likud ahead of the elections, though still six to nine seats behind.

“Potentially of more significance, a Channel 12 poll showed that a Gantz-headed alliance with the fellow centrist Yesh Atid party would win 35 seats to the Likud’s 30. In such a scenario, Gantz could be well-placed to become prime minister,” Times of Israel reported.

Naturally, the photograph of the massive poster triggered a response on social media. Some pointed out that the two leaders were made to look the same height, whereas Trump is usually noticeably taller than Netanyahu.

Trump has arrived to help with the Israeli elections. Here he is in Tel Aviv pic.twitter.com/SjPDQ8fyK9

There is also a poster of Trump and Netanyahu at the entrance to Jerusalem.

Ad for @netanyahu in entrance to Jerusalem starring @realDonaldTrump. It will be available soon if Trump wants to use it in New York. pic.twitter.com/0YVLlJlzdD

According to Aawsat, the Israeli PM also used pictures of him with Russian President Vladimir Putin in his campaign.

He also launched Likud TV, “which is a marketing TV channel dubbed after Likud party. It airs daily in the evening through Facebook, Twitter, and Instagram.”

“When all the stations are creating their own news, we’re here to tell you the truth. To provide positive coverage, that’s true,” famous presenter Eliraz Sadeh said in the inaugural webcast.

No sucking the sh*t out of rectum pics???

Netanyahu has been involved in too many scandals in Israel, so he needs to use images of Trump to make sure he wins the election and secures his home base of southern Israel.

For all the pro-Russian accusations against Trump
I don’t see Russians celebrating Trump at all.

if netanyahu asks nicely he can probably have a signed photo of donny when he’s hoisted in the lamppost with his name on it.

Trump and Nutter Yahoo deserve each other.

Only in Israel would somone think… yeah let’s bring in a pussy grabbing racist to boost our chances of election success.

This is the one Bibi used to target his LGBT base : 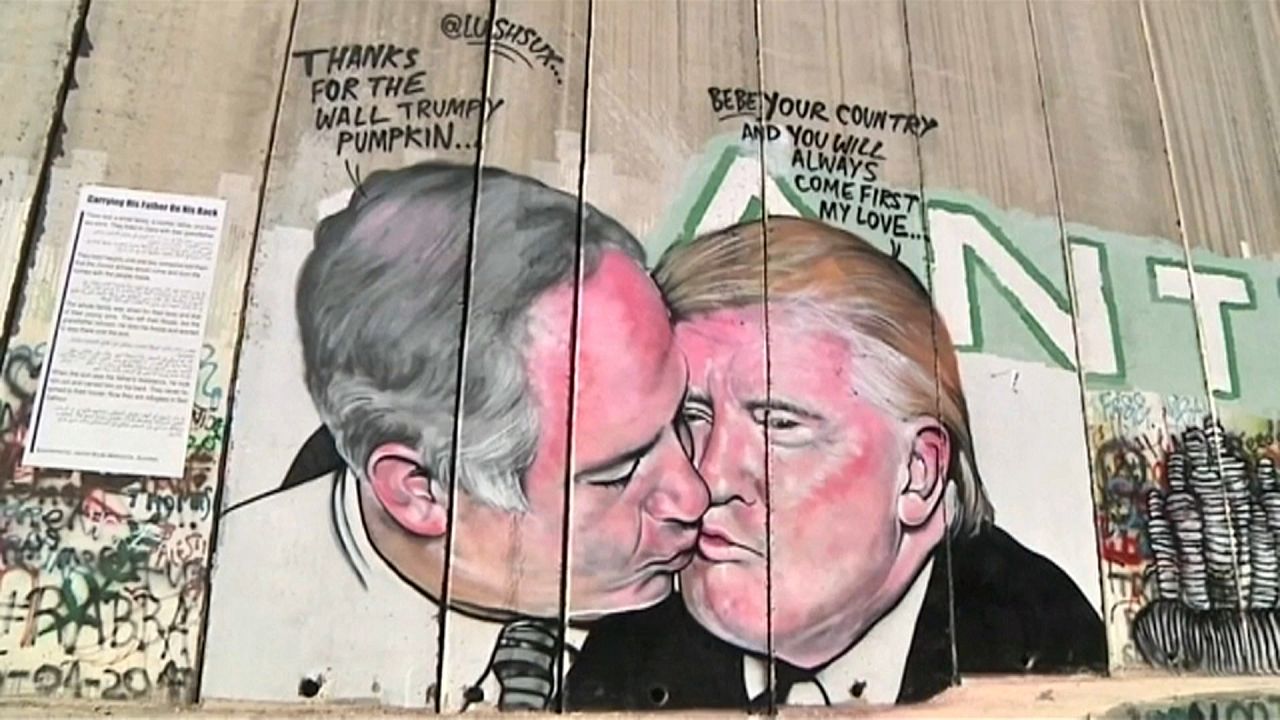