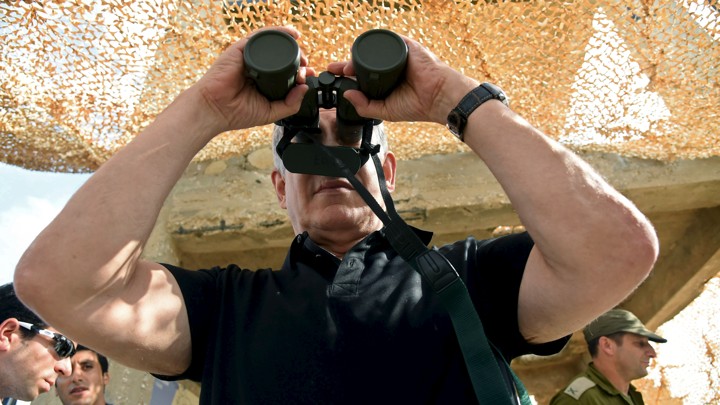 “Today, I will meet with a Russian delegation headed by Foreign Minister Sergey Lavrov and General Staff Chief Valery Gerasimov in accordance with an agreement reached with Russian President Vladimir Putin, with whom I held a telephone conversation a few days ago,” Netanyahu said at a weekly cabinet meeting. He added that the parties would discuss regional issues, first and foremost, the situation in Syria.

According to Netanyahu, Israel insists that the 1974 Agreement on Disengagement with Syria be respected the way it was before the civil war in Syria broke out. Israel will continue to act against any attempts by Iran and its satellites aimed at establishing military presence in Syria, Netanyahu stressed.

The Russian president and the Israeli prime minister held a meeting in Moscow on July 11, which the Israeli prime minister described as “very important.” Netanyahu told Putin that Israel strongly opposed Iran’s presence in Syria. At the same time, he said that Israeli-Russian talks provided an opportunity to enhance security and the level of trust in the Middle East.

On July 17, US President Donald Trump said at a meeting with lawmakers that the US, Russia and Israel had launched trilateral talks regarding the Syria issue and Israel’s security.

This smell a bullshit. What in the word Lavrov has to discuss with a criminal and Syria destruction designer.

“On July 17, US President Donald Trump said at a meeting with lawmakers that the US, Russia and Israel had launched trilateral talks regarding the Syria issue and Israel’s security.”

You gotta love this bs. What about Syria’s security from US, Israeli, French and British airstrikes, occupation and foreign trained “moderate rebels”?

Syria is just a chess piece on a board to the world’s powers.

Trump is a zionist liar.He was elected to look after israhells interests .His main task is to start a war with Iran,that is the key to the greater israhellI project

It’s time that the Russians provide Yahoo with an ultimatum like…. ‘One more strike on Syrian territory and we won’t just provide Syria’s enemies with S400s, but Syria too.’

Might wana remove the lens cap on those binocs LOL

You can call me Al
Reply to  Neurasth

hahahaha, you could be right there.

There are none so blind as those who will not see.

If respecting the 1974 cease fire equals peace with Israel (or at least the old no-war no-peace scenario before the war), then Russia will push for it. Iran and Hezbollah and many influential officers in Syria won’t go with it no matter what, and Assad is caught in the middle.

Funny how the cesspool Southfront is silent about the terrorist attack in Toronto.

Canadian authorities identified the gunman who killed two people and injured 13 others in a lively Toronto neighborhood Sunday night as 29-year-old Faisal Hussain. – The religion of peace at it again.

All terrorists are working for zionism, it’s all a scam to fool people,,just like you.You are either a zionist troll,or an idiot.

General Nutandyahoo watching his Isis mossad agents getting their asses kicked,He ran off to see if Putin can stop his terrorists impending defeat,but he is wasting his time.I’m sure he will have more bad news coming for years to come.lol.

Russia has no business negotiating on behalf of Syria. This issue can only be addressed between Israel and Syria.

why is this scumbag not locked up yet????