On the evening of December 3rd, Israel’s Defense Forces launched an operation to destroy cross-border tunnels between Lebanon and Israel allegedly constructed by Hezbollah.

The “operation” is called Northern Shield and according to IDF reports the locations of the tunnels were discovered on the morning of December 4th and their demolition has begun.

Reuters cited Israeli military spokesperson Lieutenant Colonel Jonathan Conricus who said that he operation would only take place on Israel’s side of the border and that it would not extend into Lebanon.

“We see the Hezbollah activities as a flagrant and blatant violation of Israeli authority,” he said.

In a tweet, Israeli military spokesperson Avichay Adraee said the Lebanese government is responsible for the build-up of the tunnels, saying they are endangering Lebanese citizens.

IDF spokesperson Ronen Manelis said that the construction of the tunnels in a violation of UN Security Council resolution 1701, which ended the 2006 Second Lebanon War.

“We’ve been preparing for this morning for a very long time,” he said. “I don’t want to talk about the number [of tunnels], those details will stay classified,” said Manelis, “It suffices to say that it is a small number. Work has started near Metullah, and in the coming days the operation will expand to other sections of the homefront.”

“The fact that Hezbollah has tunnels crossing the border into Israeli territory is proof of a flagrant violation of Israeli sovreignty,” Manelis said. “We see this as a very serious situation that hurts Lebanon and the citizens of Lebanon, and we hold the Lebanese government accountable. We have indisputable proof that the Lebanese government is not in control of their border. Iranian money is behind these tunnels.”

Manelis also added that the tunnels were unfinished and didn’t actually present any threat whatsoever to Israel.

Lebanese online news portal Tayyar reported that the IDF was excavating areas opposite the Lebanese villages of Adaisseh and Kfarkela on the southern border. Hezbollah declared that it had put its forces on combat on a high combat readiness to confront a possible agression.

“Israeli military spokespeople are saying they have discovered tunnels made by Hezbollah and that they are attempting to thwart any attack from Hezbollah from Lebanon into Israel,” Ghoneim said. “Since Hezbollah had its war with Israel in 2006, we haven’t seen this kind of operation in the north as there has been a tense detente between Hezbollah and Israel.” 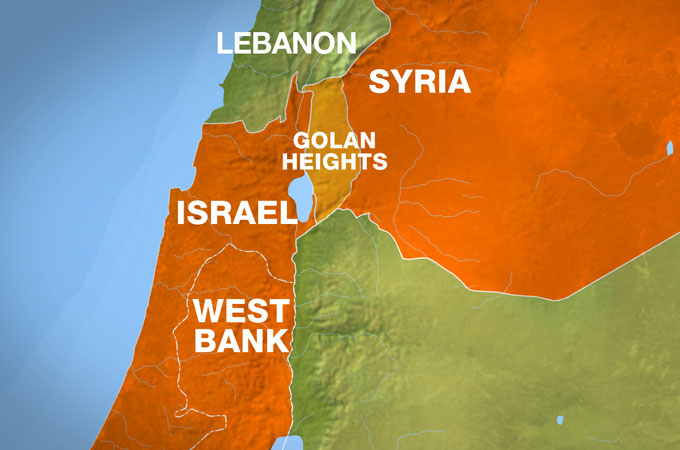 Also, on December 3rd, Israel’s Defense Minister, Health Minister, Foreign Minister and Prime Minister travelled to Brussels to meet US Secretary of State Mike Pompeo. All four of the Israeli officials are, in fact, Benjamin Netanyahu since he still assumes all of those posts. He was accompanied to the meeting by Mossad head Yossi Cohen; National Security Council head Meir Ben-Shabbat; and his military secretary Avi Blot.

According to Haaretz, the meeting was arranged in the morning and by the afternoon Netanyahu was flying to the capital of the EU, where Pompeo was attending a summit of NATO Foreign Ministers.

According to the Jerusalem Post, Benjamin Netanyahu took a warning for Lebanon, that Pompeo needed to deliver.

“Stop Hezbollah’s efforts to get precision guided missiles, or Israel will do so,” was the message.

“We are in continuous contact with our American friends,” Netanyahu said before taking off. “I will discuss with Mike Pompeo a list of developments in our region, and [actions] we are taking together to halt the aggression of Iran and its proxies in the North. We will of course also discuss other issues.”

It is noteworthy that this “short victorious war” and Netanyahu’s trip to Brussels followed a recommendation by Israeli police to indict the Prime Minister and his wife on allegations of corruption. This is the third occasion in which Benjamin Netanyahu is being accused of corruption in just 2018.

Police say Netanyahu had a “bribery relationship” with Shaul Elovitch, the controlling shareholder of Israeli telecommunications company Bezeq. They say Netanyahu advanced regulation favoring Elovitch, apparently concerning the merger of two telecom companies that netted Elovitch millions of dollars. This set of corruption charges is also the most significant, because it brought large regulatory favors to the telecom shareholder.

In February 2018, police recommended he be indicted for bribery, fraud and breach of trust in two other cases.

“One case concerns allegations that between 2007 and 2016, Netanyahu received about $282,000 worth of gifts in the form of cigars, champagne and jewelry from Australian businessman James Packer, the ex-fiancé of singer Mariah Carey, and from Hollywood producer Arnon Milchan. Another case concerns allegations that Netanyahu offered to advance legislation favoring a newspaper publisher in exchange for positive press coverage in the paper,” NPR reported.

Israel’s attorney general, who was appointed by Netanyahu himself, must now study the police recommendations and decide if there is sufficient evidence to indict the Prime Minister.

Regardless, according to Israeli law, a Prime Minister is not required to resign if he is indicted. Netanyahu has indicated that if he is charged, he would stand trial without stepping down. And he has repeatedly shown that he is set on democratically holding on to power and assuming as many ministerial seats as possible, all of them if need be.

Thus, the operation against unfinished Hezbollah infiltration infrastructure is a way to ensure a quick win that would show the Israeli people that their Prime Minister is, in fact, in control and that his government brings stability and security.

What planet does the editor who green-lit this headline live on? Not even a single bullet was fired or exchanged and we also note that the klepto coward jews DARED NOT touched Lebanon’s side of the ‘alleged’ tunnels LOL!

I’m looking at live footage of the israeli earth-digging machines right now and I’m counting ONLY FIVE machines: some chomping hither and dither on earth and the others collecting fresh-dug rubble – yeah quite the big scary israel ‘op’ LOL!

That the panicked israeli jews need a headline saying they defeated a ‘tunnel’ says it all. Kookoo kelptos!

Let me refresh the score for you. Caterpillar equipment 1, us tax payer -1.5 million.

so he bomb irsael because he is scared shitless to attack Hez.

yeah much ado ’bout nothing from the israeli thieves, as usual. time for the world to de-recognize israel and to make it a crime to send money to a country which according to any decent measurement is nothing but a terror-state and in the same vein that it is forbidden to finance say, Daesh/Isis/BokoHaram it ought to be a crime to send money to israel (pls note that jews in the disunited states of A have highjacked washington to fit their end of things, but that can also be rectified).

What is occurring is also pre-war activity as similarly evident in Ukraine (with the U.S.-NATO -allied bloc participating in these preparations, siding with an increasingly aggressive Ukrainian regime installed by this bloc through regime change).

The Israelis are aware of recent advancements in rocket/missile technology of Iran, Hezbollah and Hamas. Efforts to detect tunnels relates to Israeli fears of potential military incursions in the event of war (an increasingly probable situation recognising Israeli actions).

As Israel continues actions of aggression against Syria (including against Iranian and Hezbollah targets), reports also indicate Israel is preparing for a potential multi-front war that may involve it fighting Hamas-aligned groups, Hezbollah-Lebanon, Iran and Syria simultaneously. Such a war is increasingly probable (Israeli missile strikes showing war is in an active phase albeit so far in a limited format). Importantly, Hezbollah have already indicated Israel has crossed a line it will be unable to uncross:

– “[the Israelis] must know that they have committed a historic mistake [targeted Iranian forces within Syria]. This is not a simple blunder. They committed an act of great stupidity, and by this aggression, they entered in a direct confrontation with Iran, the Islamic Republic of Iran….. As a comment on this incident, I stress that it constitutes a turning point in the situation of the region. What follows will be very different from what preceded it. This is an incident that cannot be considered lightly, contrary to what happens with many incidents here. It is a turning point, a historic turning point. And when the Israelis committed this stupid act, they had some assessment (of the situation), but I tell them that their evaluation is false.” (Hassan Nasrallah: Israel has come into direct confrontation with Iran, Saker, May 02, 2018)

p2. – “I say to Israel: Whatever you do to prevent the (weapons transfers), it’s already too late. Everything has already been done and completed, and the Resistance (in Lebanon) already has all the high precision missiles and such, all the capabilities and armaments it needs, so much that if Israel imposes a war in Lebanon, they will face a destiny and a reality they never anticipated.” [Hassan Nasrallah]

Preparations by all parties involved for a broader war are evident (as is also evident in Ukraine with the U.S.-NATO-allied bloc mobilising at a pre-war rate). Such a situation is unfortunately a probable outcome recognising ongoing U.S. and Israeli actions.

Note: As reported on Southfront earlier, Israel and the U.S. have also been preparing to strike Iraqi Shiite militias again. In response to ongoing Israeli aggressions and in preparation for a potential broader war, reports reveal Iran has provided these militias with missiles capable of targeting regional U.S. bases and Israel.

The current escalations have the potential to progress a proxy warfare format to direct warfare (the U.S. is already escalating forms of warfare including economic strangulation/sanctions and covert support of militant proxies that are listed as terrorist entities). Despite Western narratives (propaganda) that attempt to misrepresent events, the actions of the U.S. and Israel (that are in violation of International Law and that violate the sovereignty of successive nations), clarify which are the actual aggressors.

I respect all religions because these religions gives the lessons of humanity to become son of man and not son of animals or butchers. To be kind with others. Those that butchering children and their parents for establishing military bases on their homeland are the sons of butchers and I truly hate them and I condemn them all.

So, if Hezbollah digs a tunnel into Israel it’s an act of war, if Israel uses Lebanese airspace as its own personal territory to attack Syria from it’s Israel’s god given right to do the f*** whatever it wants?

Tis time I think for Hezbollah to ‘find’ a few anti aircraft missiles and destroy the IDF planes that ‘fly through the IDF tunnel in the sky’ over Lebanon :)

Everybody in the region has this type of nose. In this particular case, Netanyahu should be lauded for a bloodless “wag the dog” operation. Paying attention to “a violation of UN Security Council resolution 1701, which ended the 2006 Second Lebanon War.” may be also a good step: will IDF stop flying over Lebanon?

Israel has ignored and violated many US Resolutions for decades.