“You are asking whether we are moving on to the next stage – the answer is yes, we will move to the next stage. I am going to extend [Israel’s] sovereignty,” Netanyahu said in an interview with Israel’s Channel 12 News.

The prime Minister, who already gained a US recognition of Israel’s sovereignty over the Golan Heights, in fact promised to annex Israeli settlements in the occupied West Bank if elected for another term next week.

To all those who still talk about the Bar-Ilan speech, Netanyahu just expressed his support for West Bank annexation on live TV.

In a previous statement made on April 3 Netanyahu claimed that he told US President Donald Trump that his country was not ready to evacuate “a single person” from the West Bank settlements.

He also emphasized that Israel insists on continued control over West Bank territories.

Taking into account a fierce support of Israeli actions from the Trump administration, Netanyahu claims may become reality in the near future.

Great news! Hopefully Trump will officially recognize West Bank as Israeli territory – just as he did with the Golan Heights and Jerusalem! Mazel Tov! MAGA!

Mate I see you in every post now, Trump isn’t saving you thats all show , btw you sound like that other guy saying he fought against demons in Iraq , Syria , Afghanistan and was heading to lybia. Just an fyi

Trump’s recognition is completely meaningless: it does not change anything on the ground nor does it change the status of the Golan Heights. It is stolen territory and remains that way. Keep dreaming your wet dreams.

When the Nazis stole all property of the jews and herded them into camps, that was a crime against humanity. Now the same thing is perpetrated by descendants of those people who were abused and massacred. After this, it is highly hypocritical for every Jew who goes with this policy to keep on reminding the rest of the world of the holocaust when they are currently responsible for the ongoing Palestinian holocaust.

If he could Netannutjob would annex the whole Westbank. If only it weren’t for all those pesky Palestinians living there.

If only there was a solution for them. A final solution……..

That final solution has been going on since the fraudulent creation of that Ĵůđęō-Ŋąžĩ (term coined by the late Israeli Orthodox Jewish professor and philosopher Yeshayahu Leibowitz) garbage dump.

The last decade madness will not have a happy end. Even with almighty jewis power.

the two state solution is dead and the party that needs to be evicted is the squatters – asap.

no other party in the world is running a

CONCENTRATION CAMP GAZA with impunity despite being a copy of hitler’s bergen belsen.

and all these atrocities are carried out by the squatters with impunity so far.

This news will accelerate the “closure” of the artificial state.

It is time action and few missiles aimed at downtown Tel Aviv will send the message. The Zionists are cowards and have no real connection to Palestine and will run when the costs become too high. 99.9% of the Khazar ghetto rats have EU, Australian and North American passports. They only live in Occupied Palestine for western welfare as each Hollywood “Jew” is subsidized to the tune of $195,000 per annum by moronic brainwashed western taxpayers.

The Palestinians have been treacherously sold out by corrupt pimping Arab regimes like Saudis, UAE, Jordan and arch Zionist pimp Egypt. It is now up to them to either unite and start a long and costly war of attrition or be wiped out like Native Americans in North America or Aborigines in Australia. Their disunity and collaboration by the corrupt senile Mahmoud Abbas and PA has caused the Zionist criminals to act with such arrogance, same goes for Golan, either fight for your lands and honor or become a footnote in history. Choice is for the Palestinians at the final juncture!

They are trying to provoke Syria, revenge is a dish best served cold.

The vile, depraved Ĵůđęō-Ŋąžĩ (term coined by the late Israeli
Orthodox Jewish professor and philosopher Yeshayahu Leibowitz) entity
believes it can get away with ever more land theft as apart of its
extermination of the Palestinians, only because their transatlantic
poodle approves.

Unfortunately for them the Palestinians cannot be
got rid of, despite the genocidal apartheid system and policies on a
par, even surpassing, those of the 3rd Reich. There will come a point
when the Palestinians will be part of 1 state: Palestine, and the
Ĵůđęō-Ŋąžĩs will not be able to keep up their polity and will have to
make the Palestinians in a democratic state, where the Jews will not
make up the majority anymore.

Their pathetic, sick project of
Jewish homeland, based on lies and fraud, was flawed from the beginning,
and history is going full circle: no more Jews-only “paradise” but a
place where Jews and Arabs will have to live side-by-side.

You’re not taking account of the fast-changing moves on the ground. The Israeli political establishment is now bent on full annexation of the W Bank in the near future – with annexation of the settlements only the first step, if effectively giving them full control of the W Bank. I’d expect another major move around the cover of the US Elections next year. Secondly, Israel has also started to think v. seriously about how to eject the Palestinians. Bolton’s/Israel’s “3-state solution” was probably only the first major idea they had. There will be more. Also, they’re probably thinking they have to act fast in contrast to the past. Having in Trump a US President who will do anything they pay him for, is too good an opportunity to waste – but he could be out by 2021.

Good points. I have not heard of the “3-state solution”.

The whole fake narrative of Pisrael is a Hollywood construct and treachery by corrupt Arab regimes installed and supported by the west. The Saudis, Emirati, Omani and the Egyptian Zionist pimp regimes have to lot to answer for. 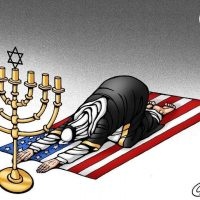 And, like you said elsewhere, Abbas has a lot to answer for. He should put on trial, locked up and the keys thrown away. He has betrayed the Palestinians while licking his Ĵůđęō-Ŋąžĩ paymaster’s boot and behind.

Sadly my friend, the whole PA is corrupt to the core. The rot had started setting in during Arafat’s time in Tunis. Mahmoud Abbas is a complete Zionist plant.

Very true. The problem is how to get rid of this senile clown and get a real leader in place? The Ĵůđęō-Ŋąžĩ entity wil make sure any potential leader is “neutralised”, like the one in my avatar.

I like the cartoon, copied it to my notes.