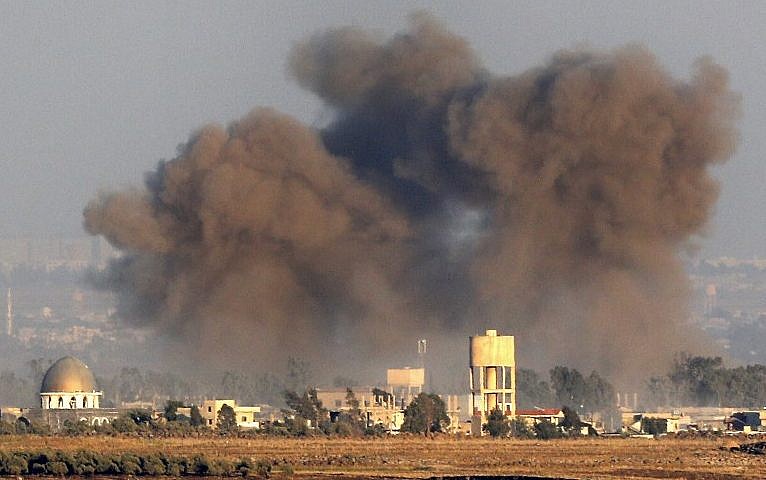 This is in direct contrast with the position of the Israeli Defense Forces (IDF), who have provided no comment or details on any such incident in the Syrian Golan Heights.

According to Haaretz, “senior defense officials say the decision not to respond to the reports on the strike stemmed from the desire to renew the policy of ambiguity of recent years.”

“We operate every day, including yesterday, against Iran and its attempts to entrench itself in the region,” Netanyahu said as he was leaving for the anti-Iran Warsaw Conference, organized by Poland and the US.

Furthermore, the military source claimed that Israeli drones launched 4 missiles on Quneitra hospital and one of the points affiliated to the security guard forces, affirming that the damages were limited to materials.

On the previous day, SANA also reported that IDF shelled Quneitra. Israeli tank shells hit a demolished hospital and an observation post in Syria’s southern Quneitra province near the border with Israel,

The incident also resulted in only material damage.

The attacks were a response to Iran, according to Netanyahu.

“Iran is issuing threats against us. On the fortieth anniversary of their revolution, they threatened to destroy Tel Aviv and Haifa. I said that they won’t succeed and if they try, it will be the last anniversary they celebrate,” Netanyahu noted

The IDF is “operating through a lot of different means and elements against their [Tehran and its allies’] attempts to arm up on nuclear weapons and ballistic missiles and entrench themselves in Syria”, Netanyahu stressed.

Netanyahu also noted that Israel’s relations with countries in the Middle East “are very good. With all of them except for Syria.” Clearly forgetting to mention Iran.

“Descriptions according to which we are disconnected [from countries around us] are the opposite of the reality. Relations are tightening. Not everything is out in the open but some of it is,” he added.

Earlier in February, Secretary of the Iranian Supreme National Security Council Ali Shamkhani warned that if Israel continues to attack Syria, “specific measures will be taken to contain it and to respond decisively and symmetrically”.

In addition to that, in late January, second-in-command of the Iranian Revolutionary Guard Corps, Brigadier General Hossein Salami told reporters in Tehran that “Our strategy is [to wipe] Israel [off] the world’s political geography and Israel seems to be approaching this reality by its mischiefs.”

three point schedule to finish off the criminal squatters now.

a) any country that at one stage recognized israel is free to de-recognize israel since the first step, ‘the recognition’ was given on the understanding that israel should become a law abiding country respecting human rights/values as encoded by the united nations and, in particular and as a minimum decorum abide by the balfour declaration, viz “ it being clearly understood that nothing shall be done which may prejudice the civil and religious rights of existing non-Jewish communities in Palestine,“and since the squatters are in breach of every aspect of the united nation’s charter on human rights/values and the balfour declaration it is an obligation of any country that once recognized israel to now de-recognize it and thus remove the legal justification for its existence.

israel, as it is called, is nothing but a criminal settlement built on murder, thievery and the operation of a concentration camp, Gaza, a la hitler’s Dachau. can it be any worse and can it be rectified – yes undermine the legitimacy of the country and send them into their next diaspora 2.0.

On your paragraph b., How come the US become a destitute states. Can you explain my dear pal..

destitute is without resources and in fact the morons are selling bonds to afford the wars and the extravagancies but at 22000 billion dollars national debt they have nothing and with pension schemes being underfunded to the tune of zillions and a wardepartment at some 800 billion bucks the forward motion of the destitute states is entirely up to the willingness of other parties to loan them the money and as you know, the de-dollarization is gaining speed and soon the morons will find it difficult to sell their bonds to the usual suspects, japan, schwitzerland, belgium und zu weiter. but that is irrelevant, work on para a) and the de-recognition of israel in order to take away the legitimacy of israel. it will take time but once the menace is closed down for good it will be something to savour.

The only confirmation we want is that Netanyahu’s head got stuck in the oven..