On March 16th, Israeli Prime Minister Benjamin Netanyahu boasted that Tel Aviv was on the way to concluding four more peace deals with countries in the region.

“I brought four peace agreements, and there are another four on the way,” he said in an interview with Ynet. “I talked about one of them yesterday.”

“One of the leaders in the region” had called him on the evening of March 15th, and they spoke for 45 minutes, he said.

He also rebuffed claims that he didn’t attend an event organized by his political party due to threat of rocket fire.

The excuse was this: he was speaking to the regional leader, and since he does not have good cellphone reception in his armored car, he would not have been able to conduct the call on the way to Ashkelon.

“I don’t want there to be [rocket] launches because of me and because of a political event, but that was not the reason,” Netanyahu said. “We were significantly late… I will visit Ashkelon, and we will take care of their security.”

In the past year, and due to extensive efforts by the Trump Administration, Israel normalized relations with the United Arab Emirates, Bahrain, Sudan and Morocco.

There was even the titanic shift of Kosovo, a country recognized by a limited number of UN members, established an embassy in Jerusalem. This was even condemned by Jordan.

Ties between Saudi Arabia and Israel have always been somewhat close, but behind the scenes. After all, Iran, as a shared enemy is a sort of bonding agent. Also the United States is a key ally of both Riyadh and Tel Aviv.

Netanyahu met with Saudi Crown Prince Mohammed bin Salman in November, and they considered meeting in Abu Dhabi in the week ending on March 14th. However, Netanyahu’s trip to the UAE was delayed due to a reported issue between Israel and Jordan.

Other countries expected to normalize relations with Israel are Niger, Mauritania, Indonesia and some alleged others.

Prime Minister Benjamin Netanyahu plans to visit the small settlement of Revava on March 21st, just two days prior to the March 23 election, to bolster support on the Right as Jewish West Bank housing starts hit a ten-year low.

“I will not uproot 100,000 Jews for a fictitious peace,” Netanyahu said on March 16th at a campaign stop. In the last week he has increasingly focused on his position on West Bank settlements.

Netanyahu has pledged to increase settlement development and to stand strong against US President Joe Biden who is formally opposed to Jewish building in Judea and Samaria.

His statements follow a four-year spike in the approval of plans for building projects in the settlements under the former Trump Administration.

Absolutely disgusting Zionist loser. He is staging desperate stunts like blowing up bleach bottles, but is scared to visit his Dubai pimps for the fear of drones. The Zionists are a global laughing stock.

Following successful high-level talks in Moscow, Lebanon’s popular Hezbollah resistance movement says it totally concurs with Russia on the need to complete the liberation of Syria from terrorist groups as well as the war-torn country’s post-crisis reconstruction.

Ammar al-Musawi, the head of Hezbollah’s foreign relations department, made the remarks in an interview with al-Mayadeen TV on Tuesday night, when he and three other members of the resistance group concluded a visit to Moscow.

“Our visit to Moscow was in fact meant to [consolidate] consultations and agreement with our Russian friends,” he said.

shylockracy
Reply to  Just Me

Hezbollah needs its own S300/400 in Lebanon. So far, Russia hasn’t changed the balance of power in the Middle East, the terrorist Ziocorporatists have unchallenged air superiority to bomb Syria and Iraq with impunity while Russia can barely bomb Idlib, from where Turks are exporting terrorists everywhere anyway.

Of course, the “total” liberation of Syria from terrorists also needs to imply the IDF Ziojew squatter terrorist filth in the Golan Heights.

Just Me
Reply to  shylockracy

Iran is meticulously building up forces in the region and really the Zionist bed wetters are not a threat.General Baqeri is one of the sharpest strategic planners of Iranian military and was on the Golan last week. He speaks very cautiously but means business.

The IRGC forces can strike the hubs of threat and the enemies’ camp in due time, with a desirable scope, on any scale, and with any degree of severity, he added.

A few weeks ago, the spokesperson for the Islamic Revolution Guards Corps warned the Zionist regime that it will commit suicide if it gets out of line.

Capacities have been developed for the destruction and
elimination of the Zionist regime, Chief of Staff of the Iranian Armed
Forces Major General Mohammad Hossein Baqeri said. 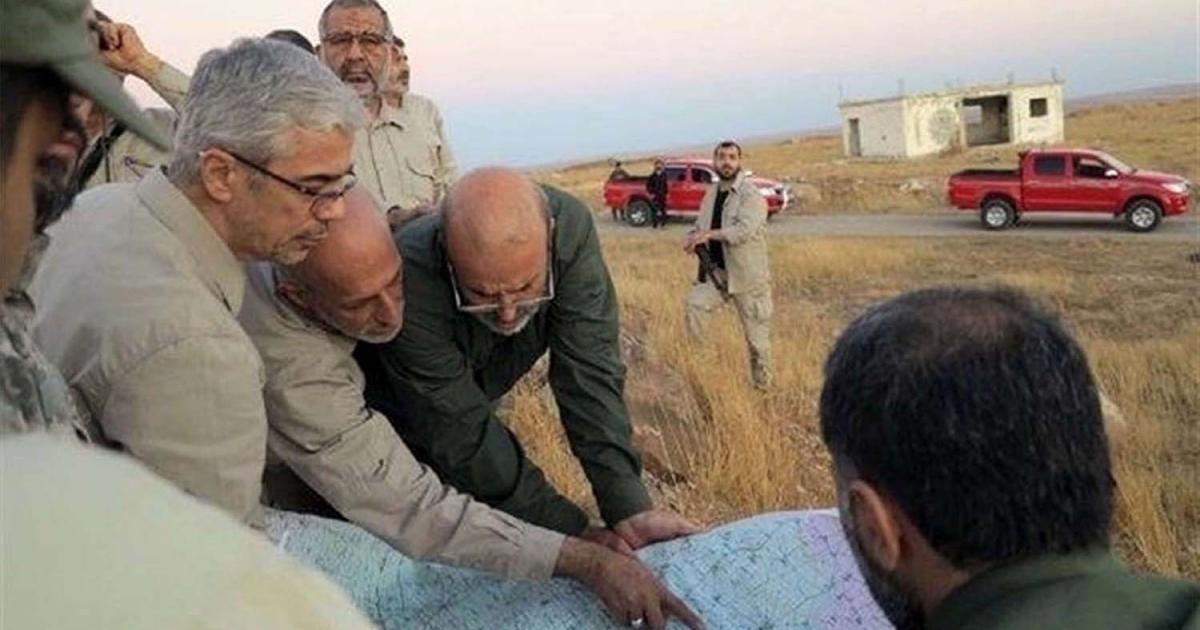 too late, nuke devices were tested in North Korea

I don’t know, but it will be soon your favorite song

It’s on my playlist on my phone … lots of music on Apple Play … eh Irani?

No 💰💰💰 from Russia to rebuild

Israel is now officially a third world corrupt dictatorship and militarily proved very inept as Iranian influence has clearly exposed. Nethanyahu is facing petty corruption charges like all tin pot criminals and was even barred from UAE, so his attempts to shore up his cowardly antics is not lost on anyone. Even India now avoids high level contacts.

Indian media reported that Nethanyahu thrice cancelled the much boasted visit to Dubai due to fear of Ansarallah drones or a Hezbollah strike. Israel is now very demeaned little entity trying to stay relevant.

he is constantly in hiding

Israel was a Hollywood myth to scare the Arabs, such propaganda does not work on educated nations like Iran who can sift through the chaff. I believe in Farsi it is called Gandum (wheat), same as Urdu/Hindi.

The Arab Jews called Sephardi and Mizrahi are treated as second class citizens by the racist Ashkenazi. They are treated worse than blacks in America or untouchables in India sadly.

orthodox are also constantly mistreated and they are white

More than 50% of the Jewish Israelis are Mizrachi / Sephardi … hello?

He’s going to consult with EU military heads in the coming days …. lol

YOU’VE got your head up yer Axx … you’re blind

The coming storm will finish you off … eh?

These are not ‘peace deals’. The isreali apartheid regime doesn’t do peace.

India just met with ‘the Quad’ including the USA

the AGENDA takes it shape now…told u 99% dummies for years….

All nations that recognize the illegal satanic criminal entity named israel are part of the satanic agenda.this includes russia,usa,china,uk,eu,etc…….

A one world government with jerusalem as its capital under satanic leadership.

weird and funny and ridiculous how folks still believe that all these above mentioned programs are BAD in the “good” nations but good in the “bad” nations……….

so keep on “believing in good UK , bad UK or good russia or bad russia or good usa or bad usa etc…. it is a theatre play for YOU 99% dummies…….

time is running out very very quickly…….. and once the final program of “solution” is initiated, the Nano Dot Tattoo…………Game Over for the vast majority of the human species…..

Have no worry they plan and god is the best of planners.
They planned to take out Iran decades ago now they plan to take Iran’s allies out and everything they are doing is ending up benefitting the Islamic revolution they created isis which turned out to be the worst mistake they made it only made the Shia more United and grew their forces now they plan on normalizing with different Muslim and Arab states this plan will also spell disaster even if the people of these countries are not allied with the axis of resistance they still hate Israel and they are not happy with normalization this will further increase Iran’s influence and they could also remember how Iran and the Shia have been preaching for decades that most of these Arab and Muslim leaders are in bed with Israel and now god brought everything to light god does not leave anyone confused now people living in these countries have a choice to pick which side they want to be on.
I believe we are heading into the final chapters of this beautiful story.

“I believe we are heading into the final chapters of this beautiful story.”

Everything will end quickly for you I’m sure when the time comes and the resistance axis starts their plan to take back Palestine you will put down your guns and run away you will not put up a fight.

The Arabs run … from Syria … from the WB et al

Don’t you mean the AXIS OF EVIL ? LMAO

The destruction ahead will take decades to recover from … Islam will be destroyed … Jihad for the sake of Allah will be expunged from the Koran and Hadith … eh?

The channel name is

like the moroccan deal, the european union in particular was most happy about that and thus of little value.

The Pals are finished … their ‘Cause’ extinct

The Jews/Zionists/Israelis control the lands between the River and the Sea … hello?

When the Arabs accept their fate … Losers of the Arab/Israeli Conflict and sign the terms of surrender offered … there ‘can’ be peace:

why isnt this little rodent in jail yet?

Nutty Yahoo is of the same school as the fat man who, laughing and without restraint, loved to say: we lie, cheat and steal.

WHERE DO THE ARABS EVEN KNOW THE ASHKENAZI FROM?

In 1939, the Ashkenazi were 96.8% of world Jewry and they were
totally unknown in the Arab region. Remind me how these folks
are connected to the Arab region?

_________
Would you support or oppose diplomatic recognition of Israel by your
Source: Doha Institute survey 2019-20