The Damascus government and US-backed Faylaq al-Rahman have reahed an agreement over the evacuation of Faylaq al-Rahman fighters from Eastern Ghouta to the northern governorate of Idlib, the Syrian Observatory for Human Rights (SOHR) reported on March 18.

The districts of Jobar, Ayn Tarma, Irbin, Zamalka and Hazzah in the Eastern Ghouta region are currently under the control of Faylaq al-Rahman and elements of the former branch of al-Qaeda in Syria, Hay’at Tahrir al-Sham (HTS).

Earlier, Wael Alwan, Faylaq al-Rahman’s spokesman confirmed to Reuters that the US-backed group is negotiating with the Damascus government to “guarantee the safety and protection of civilians.”

“The most important points under negotiation are a ceasefire, ensuring aid for civilians and the exit of medical cases and injured people needing treatment outside Ghouta,” Alwan said.

However, Alwan claimed that a general evacuation of civilians and militants from the Eastern Ghouta region is not on the negotiation table. This contradicts to the SOHR report.

According to Syrian pro-government sources, the Syrian Arab Army (SAA), the Tiger Forces and the Russian Aerospace Forces are currently preparing to launch a final attack on the last strongholds of Faylaq al-Rahman if the negotiations fail.

Time to warm up the green buses?
More rats for Idlib please.

First of all. They are not Us-backed as stated here.

and Second they are not evacuating by any means. There plan is to fight until death.

I’m seeing alot of fake evacuation news from Pro-regime media. What gives? Why the desparation to evacuate them. The Rebels won’t leave

“There plan is to fight until death.”
Yeah right, just like in all the other pockets the rats surrendered.
Grow up, Porky :D

I would make a condition that all foreign fighters from the NATO countries are turned over in chains to the SAA as well as the White Helmets.

Because its always good to give rats a way out. Otherwise they would actually fight to the death. Instead of talking about. Also, it would save the lives of a lot of SAA soldiers and Syrian civilians.

AND, eventually they will end up in NATO countries, where they can practice the skills Uncle Samuel taught them.

Not very useful to those NATO countries, but when you help Jihadis chances are there will be blow back at some point. Once out of the bottle this particular genie will not go back in willingly.

The US Coalition of Terror is the cause of ALL the current devastation in Iraq, Lebanon, Syria, Yemen and that’s just in the Middle East.

The sooner all the Deep State in US Coalition countries responsible for this are publicly executed with all their followers the better. :)

All terrorist in Syria are US backed ;}

Yes of course you are right, the US flies them in, trains and equips them, but gets Saudi Arabia to pay their wages. So they are not US backed, thanks for clearing that up.

Evacuate or fight to the death, either way your “prediction” that they will hold out against the onslaught of the SAA liberators and somehow put up some glorious, lengthy, years long last stand that will supposedly be one for the history books or some shit like that is going to fall completely flat on its face.

Just like your pathetic predictions about Aleppo. Everything you have ever predicted about the triumph of your head chopping friends has turned out to basically be the opposite.

Enjoy eating your own shit, head chopping savage. The entire pocket will be cleansed of your headchoppers very soon. And you will be making up new excuses for it, LOL.

I never made any predictions regarding Aleppo your are mistaking me for someone else. I still believe SAA will get stock in Ghouta. To many losses have already been taken and it will continue.

They will get drained to the point that this operation will denger other areas defenses.

They came with 90% of their forces to Ghouta and they will get wasted. Ghouta is like a black hole.

evacuation desparation is just an excuse to hide the losses and limit their future losses. Ghouta has only one purpose that is being a graveyard

lol “too many losses”. Ya like the exaggerated 200 soldiers here, 200 soldiers there, except even SOHR (which is biased towards militants) only reports on a few dozen here and there at most. Your head chopping friends are getting their asses kicked, and the entire area will be liberated in short order.

The only evacuation desperation is on the part of the militants who are panicking that 10s of thousands of civilians are fleeing them at every chance they get towards the SAA. Nobody wants your head choppers, in damascus or anywhere else in Syria. They are not welcome there. They will either leave, or every single one of them will be slaughtered. I know that makes you mad as hell, but as they say, you made your own deathbed.

Those “columns” of SAA are not “gone” by the way, they’re slaughtering your pathetic head chopping friends left and right.

You just watch, these glorious “mujahideen” will wet their pants and bend the knee in no time.

It is what it is bro. If you wanna go it then you gotta go at it. Thats why the rebels are there to begin with. No need to wasting time or shouting on the wrong trees.

The rebels don’t really care for much. except being steadfast. whether they are fighting the whole world or not. It is what it is

“It is what it is”, meaning its nothing more than a figment of your imagination, these so called “losses” and “columns” of SAA all being gone.

The rebels have never cared about anything or anyone. They’re just a stain on humanity and will be eliminated in due course. And then we’re going to laugh at you as Assad continues to march on to victory.

There is no sight I enjoy more, than seeing those bandits dead in a pool of blood, pale and with their eyes shut, if only they were yanks or jews it would be even better.

By the way, we never implied it was you personally making predictions, just some of your rat-eating colleagues from the troll farm paid by the CIA, M16 or some other pathetic outfit like that.

I doubt your claims heavily my friend for many reasons, but there is one/ or two obvious facts, f.e. the missing media evidence and the foreign reactions. The terrorists would spit and spam the images of burned tanks, decaptivated, burnt, shot and so on bodies of syrian soldiers all over the web, even the UN would not have the need to explode in antigovernment propaganda if Syria would just sacrifice their best units there in some kind of black hole.

All the KIA footages you have been seeing all of this seven year war is about less then 1%. It’s impossible to cover all the fronts and sub-division fronts even within one location and not to forget not every group take Phones or cameras with them while for most it’s just an everyday battle and nothing exciting about it for them as it might be for us. Once in a while we get footage of Bodies KIA

WEll, let’s say that they are Israel -backed, which is pretty much the same.

Desperation? When offensive is going that good? I feel your pain buddy :) Truth hurts you badly.

If the terrorists leave then there will be no more fighting and the civilians will not need to be evacuated.

But the Americans leading the terrorists are civilians, and they need medical help?

Faylaq Rahman reign is pretty much over in East Ghouta .They lost Sabqa and Kafr Batna today.Once SAA captures Irbeen and Zamalka they will agree to green buses.Harasta will soon be over and only Douma will remain

How long will Douma remain though? And won’t Irbeen and Zamalka be more difficult to capture, as they both are twice as big as Saqba and Kafr Batna?

It looks like the Jew world order’s reign of terror outside Damascus is coming to an end, and a lot faster than many expected. Given that Ghouta was 10 times the size of the pocket south of the city, there are going to be a lot of resources available for cleaning it out as the Ghouta operation wraps up. 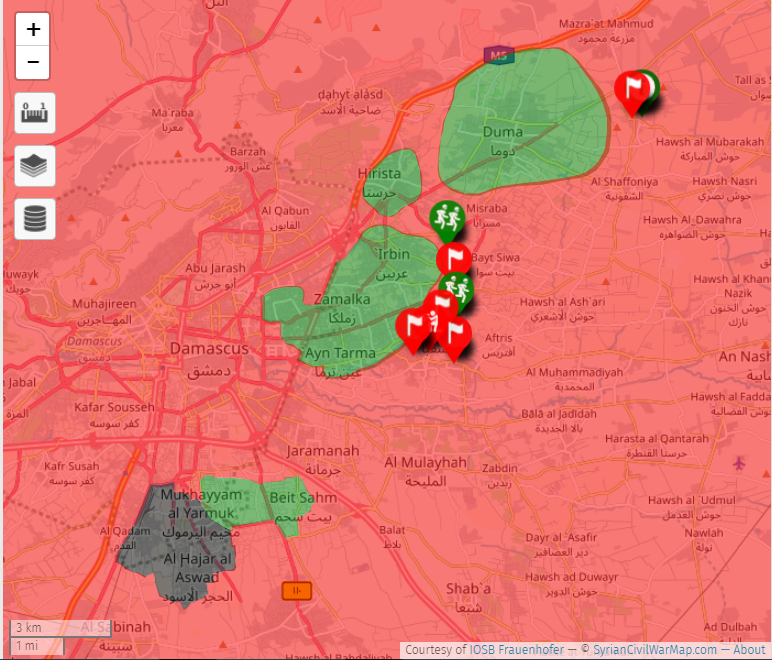 It has gone much faster than I expected. Quite brilliant.

Al-Rahman are one of the many bitter grapes that make up the Acidic-Bunch of Yankee/Qatari Head Chopping proxies. The sooner they are on there way from Ghouta and South Damascus the better. The Republican Guards and the Tiger Forces are going to be needed soon for a very important mission

If racist supremacist Jews will attack in the east by ordering their stupid Goyim ISIS, YPG and USSA slaves to attack then there is no way al- Rahman will surrender for precisely this reason. Negotiations are just a delaying tactic until the attack in the east, so the SAA must attack the instant they are ready to do so, even if a surrender agreement has been reached but implementation is delayed. Write into the agreement dates and times any delay is a breech deal is off, so the SAA can be ready for any attack in the east.
I must say I doubt any such attack by the YPG / SDF / ISIS can succeed since it will have no USSA air cover (thanks to Russia and probably counter cruise missile strikes as well) and we all saw how fast the Kurds collapsed without air cover in Iraq and Afrin