According to the NBC News TV-channel, the secret plan of US President Donald Trump on fighting the Islamic State terrorist group is very similar to the Barack Obama’s plan. 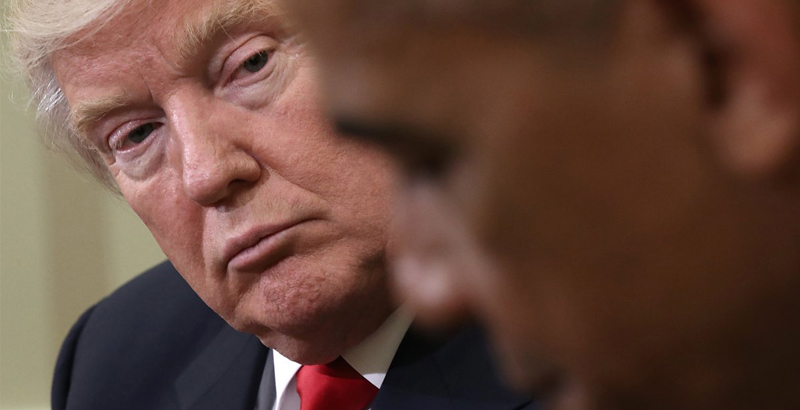 The secret plan of US President Donald Trump to fight against terrorists of the Islamic State (IS) group is very similar to the plan of the former US leader Barack Obama, the NBC News TV-channel reported on Friday, citing two high-ranking officials, familiar with the document. Apparently, the NBC News’ experts just forgot several details of the Obama’s program.

In their view, “it turns out to be a little more than an ‘intensification’ of the same slow and steady approach that Trump derided under the Obama administration.”

“The plan calls for continued bombing; beefing up support and assistance to local forces to retake its Iraqi stronghold Mosul and ultimately the ISIS [Islamic State] capital of Raqqa in Syria; drying up ISIS’s sources of income; and stabilizing the areas retaken from ISIS,” the officials said.

Two famous experts on military strategy consider the plan “insufficient” and fear that the document “won’t fulfill Trump’s pledges to ‘totally obliterate ISIS’ and do it quickly.”

In his turn, spokesman for the Pentagon Capt. Jeff Davis said that the preliminary plan is “a grand strategy – which places even more emphasis on diplomacy, economics and information than it does on the military.” He also stressed that the document is based on “the whole-of-government, better synchronizing public diplomacy, cyber, information, financial, as well as military instruments of power, and it enhances our coordination across regions.”

A source in the US Defense Department noted that the plan “eliminates much of the cumbersome decision-making process previously in place. This streamlining, the official said, will allow decisions to be made more rapidly and with greater flexibility.”

According to official data of the US government, some 500 American servicemen are deployed on the ground in Syria, while there are 5,200 US soldiers in Iraq. However, according to a senior representative of the US Armed Forces, “the actual numbers are at least double that.”

Earlier, US President Donald Trump instructed the Pentagon to prepare a plan for destruction of the IS in Syria and Iraq, the draft document has already been handed over to the president. As the Washington Post newspaper reported on March 6, officials, who participated in the plan’s preparation, proposed to remove restrictions on the number of US military contingent in Syria, where there are 500 American servicemen now.

On March 9, spokesman for the Combined Joint Task Forces of Operation Inherent Resolve, Colonel John Dorrian, said that the US sent 400 additional troops to Syria. On March 15, the Washington Post reported, citing an official from the US Defense Department, that the Pentagon is going to send at least 1,000 other troops to Syria ahead of the offensive on Raqqa city.

Obviously, NBC News’ sources forgot at least two main differences between the Trump’s and Obama’s plans to fight terrorists in the Middle East.

Firstly, the Obama’s administration actively supported armed Syrian opposition, affiliated to the al-Nusra Front, also known as al-Qaeda. In January, Deputy National Security Advisor for Strategic Communications for former US President Barack Obama, Ben Rhodes, openly declared this fact in an interview with the Politico magazine, adding that only the fact that the al-Nusra Front (now known as Jabhat Fateh al-Sham) might use “weapons that we gave them against us” prevented Obama from supporting the group.

At the same time, Trump actively confronts Al-Qaeda. The last operations of the US forces, aimed against the group, are the best examples of his intentions.

In addition, Obama repeatedly claimed that there were “no boots on the ground” in Syria and Iraq, while it obviously was not true, as the US Special Forces operated in the countries. Trump does not hide the fact of the US forces’ presence and openly talks about his intention to increase of their number.

US has no intention of fighting ISIS and their invasion of Syria is to impede Iran who is gaining considerable authority. Deploying troops to Iraq and Syria to contain Iranian influence is just the start of it. Ultimately, Trump’s Cabinet of anti-Iran warmongers seek to destroy the Islamic Republic itself. Their difficulty is how to convince Russia to go along with this: Syria has taught them that without Russian acquiescence, regime change can be very difficult indeed.

I think you’re right given the trend in that direction for over 35 years. It’s no small secret that the US has an overarching objective in the Middle East – that being the isolation of the Iranian geopolitical sphere. Ironically, both major efforts to isolate Iran – the invasion of Iraq/toppling of Saddam Hussein as well as the support of the Arab Spring uprising in Libya and Syria – have actually served to strengthen the Iranian government’s sphere of influence in the old Persian historical strongholds. Particularly in Iraq, when you consider that Saddam – for all his wickedness – was a staunch enemy of Iran, perhaps the greatest misstep was exchanging his dictatorship for a Shia-dominant government at least underhandedly in step with the Ayatollah.

I would take your assessment one step further, however, and add that the continued support for Israel, as well as paving the way for further Israeli gains in the Golan Heights is also at the core of this initiative. We have seen in the last few days a rise in active participation of the IAF targeting both Hezbollah and SAA assets in the Palmyra region. I suspect this is as a direct result of greater US involvement with the SDF.

I believe Trump wants to eradicate ISIS out of Syria, Iraq, Lybia…etc, unlike Obama who walked on eggshells about Islamic terorism, lied about American presence in the area, and helped ISIS directly and indirectly, Trump is not shy to declare that he wants to eradicate ISIS. Trump is focused in deploying military assets and obtaining immediate results with a clear exit strategy, a clear goal to secure victory.

The exit strategy is determined by the distinct initial goals becoming fulfilled. Destroy ISIS, have the Iraqi government be more lenient towards Sunnis and provide them some opportunities, withdraw most of the special forces and combat units once the goals have been fulfilled. The objective is to go remove ISIS surgically and not create any problems leading to insurgencies, let Iraqi and Syrian forces and governments deal with social and political matters that need to be dealt with.

Syria was making sweeping progress against ISIS after we stopped (I hope) supporting them. So why exactly did we Illegally enter Syria. We were not needed nor were we invited. This smacks of same BS we’ve seen with Obama. Trump was not voted into office to continue wars of aggression or regime change. He wants to restore Law and Order he can damn well start with the constitution. This is a decision for Congress to make certainly not him. And piling up troops in Kuwait so Generals can pull from them as needed, thinking they are avoiding dealing with Congressional approval is wrong. Trump knows it and so do the Generals. Thank you for your answer

Syria with the help of the Russians were making good progress against the jihadis in areas that had strategic significance in the overall scheme of things. ISIS was attacked occasionally with Calibr missiles and from the air. Obama sent special forces in N. Syria to “train and assist the Kurds” in their effort to clean up NE Syria from ISIS occupation. The special forces did not represent a major offensive punch against ISIS, Obama being content to go through the motions of “fighting against ISIS” while giving every opportunity to ISIS to cover its tracks. Trump, is willing to use a more muscular force against ISIS to eradicate it, deploying troops in Kuwait and acclimating them before sending them to Syria. Trump inherited this mess from an Obama policy that allowed ISIS to live and prosper, I do not think Trump needs congressional approval for his actions against ISIS, because he is fighting against terrorists, not a national entity.

I’m not sure we can accurately claim there is any exit strategy at this point given that the Trump administration is still waffling on declaring its objectives in the Rojava region after the collapse of IS as a permanent state. For all we know, he will opt to further embroil us in the conflict by using the guarantee of continued guerilla terrorist acts in Syria and Iraq after the fall of Raqqah, Mosul and Deir Ezzor to justify the continuing presence of US ground troops in northern Syria and the Kurdish-held semi-autonomous lands surrounding Erbil in Iraq.

I do not see it like that because Trump is a business man, results oriented person instead of political hacks acuicesing to neocons and globalists. The Rojava matter should be handled by the locals, not US. Trump will not support the Idlib mercenaries, and he will tell S. Arabia to come to its senses, instead of its delusional grandeur. US could very well mainatain a presence in Iraq or northern Syria for strategic purposes; Russia, Iran and Syria have positioned themselves in a position of strength, which will grow stronger as time passes. I see Trump working with the Russians towards a common goal, instead of against each other. Trump’s foreign policy will benefit the interests of US, not neocons or globalists, and the important part is the bottom line. Trump is not going to waste money on conflicts that do not benefit America in a direct manner.

This was by far the most destructive thing that Obama did, if Trump dials this back and abandons regime change then he has taken a 180 degree turn from Obama. At least he would not be getting in the way of defeating ISIS and Al Qaeda.

“Drying up ISIS’s sources of income , and stabilizing the areas retaken from ISIS ” the officials said .

In other words , in Syria secure the oil fields along the river , between Raqqa and Deir Azzor , and hold “for the sake of stability ” . And rather be slow about it , as their cover has been blown , big troop build up , big moves . Power loves a vacuum , Putin this is not the time to be slow or meek , secure Dier Azzor and the oil fields .